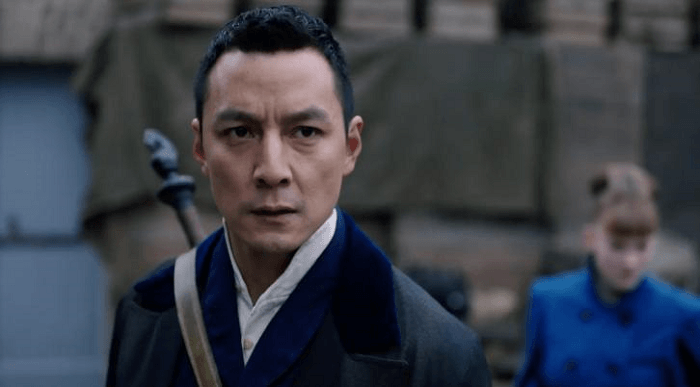 And you say Clipp City

First off, props due, no matter what kind of body shaming your devolved ass is about, why Bajie look exactly the same as he did 20 years ago, though?!? Your boy ain’t aged, put on or lost one pound and don’t seem like he’s lost much edge on his skill level either. He peepin’ the box which we assume contains the girl he mentored and lost a long time ago. Why she straight up punch herself out the box like it was a damn cocoon. Ah. Butterfly, ahh, you slick bastards, I see what you did there. She come out swinging and Bajie gotta give her some space. AS SOON as she picked up the other blade and started dual wielding, I was like, FUUUUUUUCK IS THIS A WIDOW ORIGIN STORY?!

Minerva BEEN a problem, yo. From jump. Turns out, she knows about (seemingly) the dark gift, the book, the city, all dat. Well, as much as anyone else, at least.

In the present, Bajie getting himself right to go…wait, save, Minerva? Like, I get that this is his mission. But, does the Widow look like she needs saving? From anyone? Ever? Bajie bullshits his way through the front gate of the sanctuary and gets his beggar’s limp on through the compound looking for the Widow.

Sunny making deals with the Widow since she told him that Quinn “took” Veil Da Fictional Bae. The same way my daughter “took” the last chicken nugget because she kept asking me about it and I finally said, “here, heathen.” Fuck outta here man. Can’t wait for that shit to come to ahead. EXPOSE HER.

Sunny says that MK needs a safe place, but he no longer has his dark gift anymore. Widow like…oh, so the boy is useless. Aiight, bet. 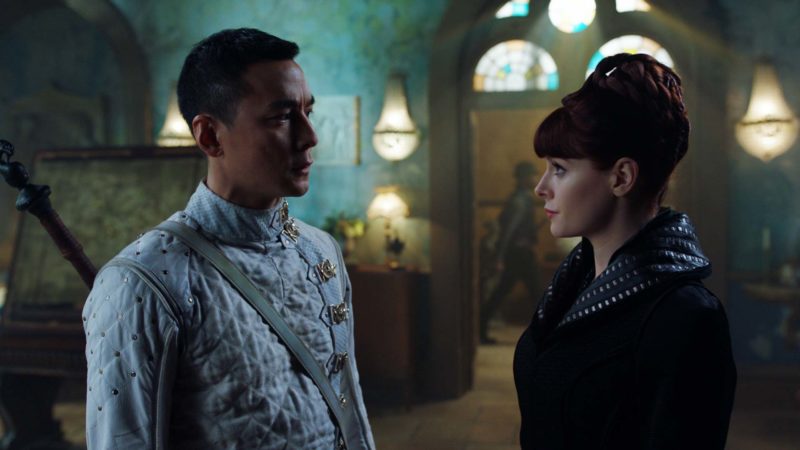 Tilda and MK catching up and Tilda is SOOOO happy right now. She kind of legit has everything she wants in this moment. She smiling like she just broke a dude’s neck or something. MK reaffirms her that he no longer has the gift and Tilda kind of look at him like, shame, wanted to see what else that gift could do…

MK shows her the Wired magazine (still killing me that Wired is the light of the path in the future) and tells her that shit is real. Then MK asks her to go with him now to find the city. Look fam, we’ve only had 9 episodes so far this year, and this the second woman that MK has given the “you can leave behind everything you know and travel with me to the unknown” proposal to. Like, that ratio is pretty amazing, but IS MK DAT FINE DOE?! I feel like if I asked my wife to leave everything behind and go to New York with me in pursuit of my dreams, she’d be like…yeah…so I cooked. And we ain’t abandoning this mortgage and fuckin’ up my credit score so…hard pass.

And I really believed that Tilda might be smiling too hard to hear anything reasonable and would say yes, but she was like, ACTUALLY, I’m kind of booed up. Odessa got staying power yo. She done put it on Tilda and slammed that Gandalf staff down for any fuckboys like, YOU SHALL NOT PASS. MK is like, that’s cool. Last girl I asked to run away with me got murdered anyway, so that’s cool. Hope your happy and shit. On cue, Odessa walk in the spot to summon Tilda, then freaks the fuck out when she sees MK. Tilda runs after her like, what’s your problem. TILDA, YOU KNEW WHAT THIS WAS. Odessa didn’t even have to tell us, we know she done seen MK let that Sith rock before. Turns out she was on the transport when MK Hotline Miami-ed ayebody. She like, promise me that you won’t go near him. Tilda is like, girl, you fine and all, but like…you ain’t that fine. I do what I want.

Maaaaan, listen. Quinn out here working Gabriel over with some fuckin’ ice cream, fam. I mean, look, if you trying to convince me to become a suicide bomber and believe in some higher purpose, then you better have some chocolate chip cookie dough, fam. You ain’t gonna have me out here trying to become combustion over some vanilla, b. Gabriel don’t give a fuck doe, he take the bomb in the bag and goes on his mission.

Veil walk up on Quinn like, The fuck you want doe?

Quinn is like, you got something to say and Veil is like, you ain’t gonna remember nothing I tell you anyway after Sunny come and take that dome piece. Quinn try to get familiar and shit and Veil gave him the straight up Archie slap.

Everybody like, THE FUCK…you know this dude still holding Henny Rock, right?! Veil. Ain’t. Bout. That. Soft. Shit. And I’m like, yeah, fuck him up Veil. Then Quinn smacked her back and I’m like…

Sunny peeping the map and Waldo come up in there with the bars:

Same old Sunny. Back from the dead and already finding new ways to die.

Waldo, is lookin’ at Sunny’s plan like fam, you know this some dumb ass shit, right?

Waldo is like, I told you not to get emotional about this shit. Sunny like, that’s what kept me alive. And I have to do this for my family.

Waldo tells him that if he goes through with this shit, that he still need to watch his back cuz his Baron is how you say, less than trust worthy. They do the straight up “we will never see each other again cuz one of us is going to die and my money ain’t on the dude played by the actor who’s the executive producer catching the fade” handshake.

Lydia and Quinn being REAL honest with each other over this dinner. Quinn is like I know you hate me. I know Veil hate me. But, ya know…ya can’t leave either so…this shit bout to be mad cozy. Quinn is like, just remember that if you wishing for my downfall, I hope you brought a pillow for my grave fam cuz you rollin’ with me.

MK looking out the window, lookin’ like a dude that didn’t get cast for Hamilton and just never took off his auditioning costume. He waves Tilda and Tilda is like, new boo, who dis. 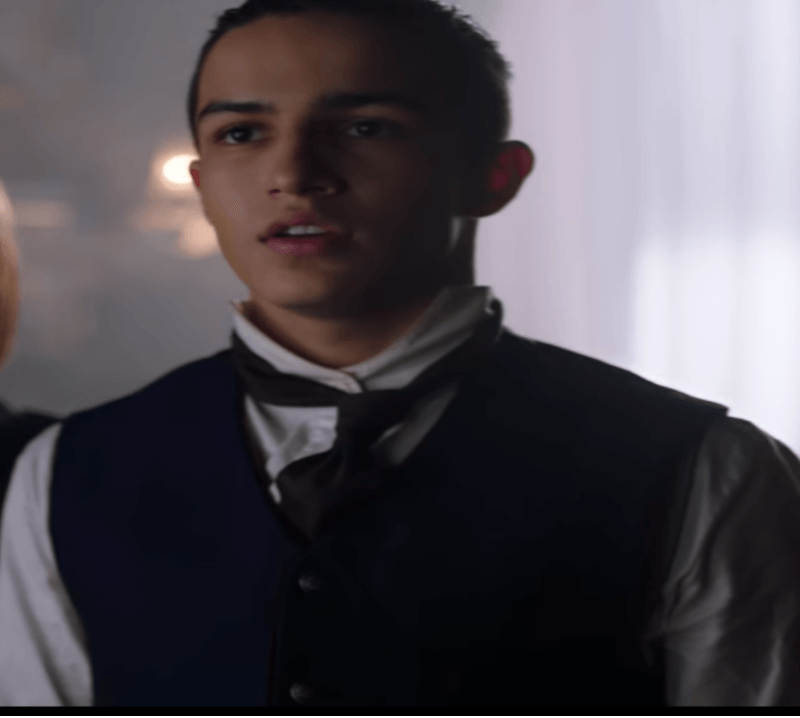 Widow is like, welcome back. Sorry about what I did to you earlier. Also, when can I use you as a weapon cuz I suck at small talk that lasts more than 15 seconds. MK is like, yeah I ain’t got it like that anymore and Widow is like, nah, we gonna get you your groove back. MK says all he wants is peace and Widow is like…but…you’re boring MK. You need this fam. She says that he should consider her offer before he bounces.

Widow, Tilda and Sunny gearing up and Sunny is like, so…we good after this? And Widow is like, yeah, sure most probably almost kinda guaranteed should in decent probability, be fine. There’s a commotion out in the yard and Gabriel ain’t take long to grab a hostage and call for the Widow. Gabriel is like, first, let me kill one of the few sistas here. Check. Now let me insult Sunny and tell him that Bae is got a new cozy nest and that your son ain’t even your son no more. Check. And also, this alliance is on some bullshit cuz Widow traded Veil to Quinn anyway.

[divider type=”space_thin”]
Man, Widow hit your dude with a monarch to silence him, but it ain’t a killing blow and your boy got some party favors under that coat. He yells “The Alliance is Over” which actually might be the new dope shit anytime you want to hate on multiple people in congress together. Weddings. Date Night. Votes to strip healthcare. It kind of works everywhere that you want run up in someone’s spot and yell that shit.

Then your boy hits the switch and makes the Sanctuary go all Swordfish.

FAM. Everything is fucked up yo. Cats are split in two, carnage everywhere. Widow sees Sunny still alive and knows she never actually denied that shit about selling Veil back into slavery.

She tries to monarch dude right then and there. GOTDAMN WIDOW. Sunny like, yeah, its been real and bounces, but some clippers must have forgot who the fuck Sunny was and give chase. He deals with them and the Butterflies shooting arrows at him. He gets outside the walls and gets bailed out by Bajie, who look like he been rolling around in the mud in a onesie all this time.

Sunny leaves to go the fort and find Waldo’s secret stash and tells Bajie to grab MK. MK surveying the battlefield and seeing the bodies when Bajie comes and finds him. He tells MK that Sunny told him to head to the Fort and also grab the book from the Widow. Except he didn’t say that last part.

Quinn ain’t dealt with a kid in a long ass time cuz Henny Rock crying and he don’t know what to do. Well, he can’t produce milk, so he kind of shit out of luck. Lydia says that Henny Rock needs his mother and like, nourishment. Quinn finally relents but he mad paranoid about that shit. Like, he might never see Henny again.

Bajie and MK hunting for the book, but that shit ain’t where MK last seen it. Probably cuz Widow been had that shit. She walk up on them with Odessa who saw the plan going down. Bajie is like, look, we ain’t leaving without the, gotdamn you gotta lot of people with crossbows pointed at us. Widow is like, yeah, you bout to translate this shit or you for real walked into the lion’s den fam.

Lydia get led to Veil’s prison and sees that they for real rigging this shit to blow. She tells Veil that the Lazarus Pit is on borrowed time and they need to Prison Break this shit sooner rather than later.

Tilda reports to the Widow that she couldn’t find Sunny, but all of a sudden, Widow real paranoid and questioning Tilda on shit. Tilda like, ok. Bet. That’s what we doing. THAT’S WHAT WE DOIN’ MINERVA. BET.

She start giving Widow the bars. Power changed you. You lookin’ mighty Quinn right now. You out here sacrificing folks to boost you up. Tilda. Is. Fed. Up. She is for real tired of Matilda’s shit. Then hit her with:

I should have poisoned you when I had the chance.

Minerva hit her with the ill slap, then is like, ok, you know what the people want, so let’s face this shit off. Straight up taijutsu, and this shit is illllllll. Tilda giving Minerva all she can handle for a while, but then Minerva pull out the swords. Tilda is like…oh. I thought we were just clearing the air…but, we doing this shit to the death? Oh…oh… 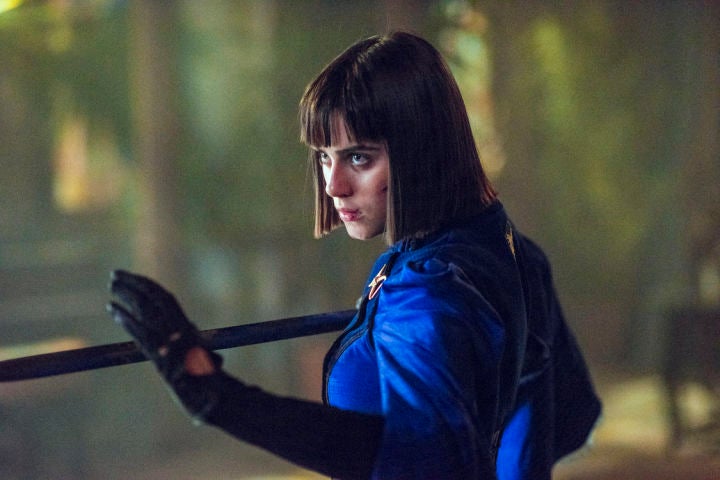 Maaaaaaaaan, this was probably the illest fight we’ve seen so far. And that’s saying something for this fuckin’ show man. Sword clang game was ridiculous. RE-DIC-U-LUS, bruh. But Minerva too thorough man and drops a gotdamn chandelier on Tilda. Tilda begs for that finisher and Minerva hit her with the Johnny Cage roundhouse. That shit might have knocked her out or knocked some vertebrae lose. It’s hard to tell. Gotdamn Tilda. Shit was all good about a week ago.