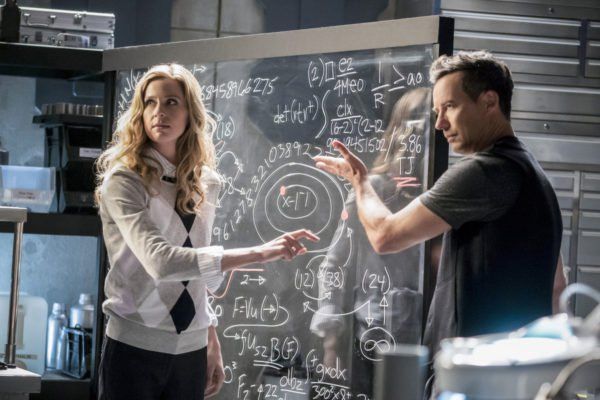 Now you knooowwww they had to follow up that Savitar reveal with another dope episode. Luckily, Cause and Effect did not disappoint. I don’t know who wrote and directed this episode but the subtle foreshadowing game was on point. The theme of acceptance is littered throughout, but I’m not tryna get all professor Stein on you guys, so let’s jump into this week’s episode of Team Flash trying to science themselves out of another shitty situation they put themselves in. Team Flash man. These guys put themselves in more danger than any other superhero of all time. And the S.T.A.R. Labs security is still super trash!

We pick up where we left off. Darth Flash just revealed himself to be a time remnant created by Barry’s abuse of time traveling. Everything is better when Barry lays off the crack time travel, even his villains have enough sense to continuously tell him that..like every damn season. Well, you know Barry couldn’t handle hearing this is all, once again, completely his fault so he goes on the offensive and rocks Baniken Skyallen (meh) something severe. Dam near choke slams his scarred ass into the core of the earth but burn victim Barry is still from the future and has a few tricks up his metallic sleeve. Yea, his Megatron suit moves on his own and saves his owner from catching that fade in a Flash. He regains his footing and glides into his suit wild smooth like velvet and we get the ill speed charge from both opponents, resulting in a lightning throw from both parties that ends in mass destruction out in these Central City streets. Darth Flash has escaped.

S.T.A.R. Labs: Barry fills in the team. They start to brainstorm and Cisco comes up with the genius idea to stop Barry from creating any more memories. No more memories and Time Remnant Barry will literally never know what happens next. Cisco hooks OG Barry up for his wash and set brain zapping and riiiight before he pulls the switch the first sprinkle of foreshadowing goes down when Joe says, “Hol up right quick. Wasn’t Caitlin the brain expert, while you were the super suit and gadget designing, villain naming guy?” Cisco acts like he didn’t hear Joe toss Noob Saibot levels of shade, activates the memory suppressing magnet and it’s done. Slight problem. They wipe Barry’s memory completely.

Homie is now living the Momento life and on cue, Joe gets a call from Motown Love Bae asking for him to bring Barry down to CCPD so she can prep Barry for testifying against a guy he helped put away. Only problem is, he ain’t can’t help shit right now! He ain’t even going by the Barry. This cat looked at his ID and saw Bartholomew and was disgusted then adopted the name, Bart. So yea, it’s lookin’ helpless.

Joe takes the lead (cuz that’s what the greatest dad on tv does!) and splits the team up. Julian and Cisco get to work trying to get Barry’s memory back. They put Tracy Brand to work, with HR supervising, cuz that’s gonna speed the progress up as much as pairing the nerdy little boy from Sandlot up with the hot lifeguard. Aint shit gettin’ done fam. Nothing but sexual tension. You could cut that shit with an Omar Dick Pic poem.

CCPD: Cecile hits Joe’s jack and tells him they need their Forensic Scientist to testify against our weak ass, unnecessary villain of the week, Heat Monger. Joe and Iris take Bart down to the station and are forced to tell Cecile exactly how idiotic of a move they made.

Cecile: He’s got amnesia?! Ohhh, this is kinda dope tho, cuz all this Flash shit is still new to me. What, err who did this? Ooooh, was it one of those super villains? They hit him with one of those memory wiping wammies?!

Joe and Iris: *Hangs head low* Actually we did this to him ourselves.. yeah we fucked up.

They completely bomb the disposition. Barry was out here actin way more hyped than someone who does this for a living, ever should. Julian and Cisco tried it. Hooked Barry up with those failed Google Glass specs but one sweat drop and that plan fizzled. Heat Monger is set free.

S.T.A.R. Labs: Caitlin knows the guys are up to some fuck boi shit cuz Savitar is tweaking in a warehouse, she pulls up and threatens the team. Cisco sees a glimmer of hope and recruits her to help them get Barry’s memory back. Julian tries it. He’s shut down with some of the most venomous bars in Flash history. She tells this boy, “I don’t love you and I never did.”

This is the happiest Barry has been in 3 years his entire life. He’s not holding the weight of his mother’s death. He’s not bearing the scrutiny of having a father who was believed to be a murderer. He doesn’t remember having to watch The Killing Joke or Iron Fist. He’s smiling instead of brooding. He doesn’t really know if he’s allowed? supposed? to kiss this bronze beauty before him. It was real cute.

Iris is thoroughly enjoying her very own version of Flashpoint. This is the reality that she would do anything for, and it was nice to see her get some real deal screen time. She hasn’t gotten much of this season, and even then she was usually Joe’s daughter, Wally’s sister, and Barry’s fiancee or not. Here she is just Iris, enjoying a fiancee who is care-free and excited to make out with his gorgeous gal. Too bad that kiss caused our boy’s speed powers to go off.

S.T.A.R. Labs: They rush Barry down to the lab so they can get’cha boy on the Speed Track. It was a good thing too, cuz Heat Monger got fire alarms goin’ off somethin’ severe. He’s lightin’ up entire office buildings so Flash heads down there, despite not knowing how to do much of anything. The science squad came up with the genius plan to electrocute Barry to get his memory back, but remember it takes some traumatic shit for it to work. Of course, Iris comes in with that sultry, seductive voice to remind Barry of who he is. He returns to his former ways and puts out the flames with the help of Kid Flash, who got his powers back reallll quick.

Sooo HR and Tracy are a perfect couple, right? Called that shit.

Had to bring back the S.T.A.R. Labs horrible security watch. This superhero hideout is so wishy washy, a giant shark could walk through the door and not one alarm would be tripped.

Tracy and HR finally stopped swapping spit long enough for Brand to figure out a way to create the Speed Force Bazooka. Lit name. They should be able to trap Savitar in the Speed Force forever if, you know..they can find 3.86 terajoules of energy to power it. Ohh that’s just more than the sun. Good luck getting past that 3 story creature of solid muscle to acquire it.