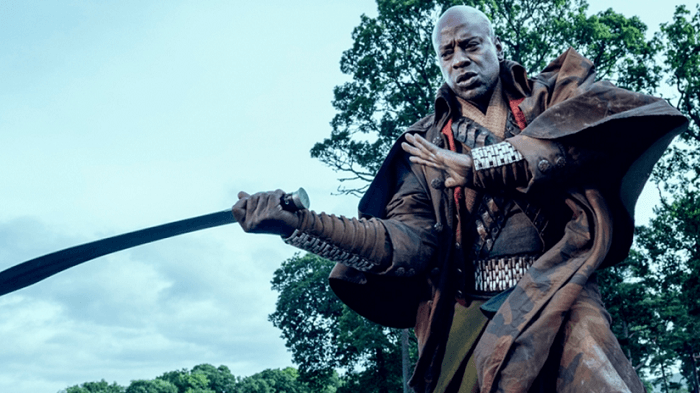 Barren and Windswept is either the name of Veil Da Fictional Bae’s debut poetry collection, the post-apocalyptic buddy adventures of Sunny and Bajie traveling the wasteland (outside of the Badlands, mind you), or the shit that Bajie keeps saying that ain’t helpin’ his ass walk any faster. Seems Bajie don’t really know a shortcut, he knows a guy who knows a guy type shit.

Yo…I don’t know what you paid for the EZ pass this year, but that shit had to be less expensive than the toll to cross this muthafuckin’ bridge towards the Badlands. This brotha ain’t the troll under the bridge, this brotha is the cat that killed the troll, went to the troll’s home, killed his family, ate all the troll’s food (which was probably humans) then came back to the bridge and put up a sign that said “Under new management.” Sunny is like, yo, we don’t want no trouble, but apparently, the best clipper alive can’t tell when he being hunted by a pack of scavengers looking to collect his bounty. But post-apoc Blade? He got this shit. WHY YOUR MAN SHOTPUT HIS SWORD THROUGH A DUDE’S THROAT. How many shoulder presses you gotta do before you can make a sword do that shit?

The rest of the pack come out and Sunny / Post-apoc Blade starting getting that Tekken 3 hand-to-hand work in. Keep in mind, Post-apoc Blade GAVE UP HIS SWORD and he knew there was a crew of cats he was about to be fighting. Hakuna Matata clippa, he got no worries. Your boy cut a dudes head off clean AND THEN SIDE KICKED HIS NOW UNATTACHED HEAD INTO THE CREEK LIKE WHAT THE FUCK MAN?!?! There never has been and there never will be any chill to be had in this world, b.

Bajie, appreciates the assist, but he thinks Post-apoc Blade just helped with them cats so he could collect a bounty himself. And yeah, we all be like, yo, Baj, you paranoid fam! But then Post-apoc Blade take off his shirt and they learn that he been going to the same tattoo parlor as Sunny for years. He might even have a few more punches on his rewards card if we keepin’ it one hunned.

M.K. out here doing the training montage by his lonesome. I mean, he ain’t got nobody else to blame for that hair choice, so some self reflection probably what he needs right now. Dude walk up in the master’s spot (mad disrespectful if I might add). He wants to know about his mother, but the Master is like, fam, you actually have no idea what the fuck you doin’ b. 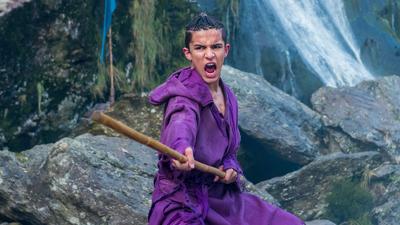 Waldo preppin’ The Widow on how to play the Conclave. Widow gotta play some politics, which ain’t some shit she used to. Widow tells Tilda that she only got a plus one for this shindig and Waldo is eating her chicken parmesan. Widow hands her the two chains swords and tells her to execute operation oil fields plus matches if she don’t come back. 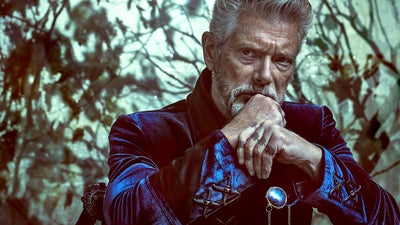 Maaaan, listen, who the fuck Quinn think he is, Mrs. Darth Doubtfire, out here reading fairy tales to Henny Rock and shit. Its time for Ra’s Al Quinn’s x-ray and grand entrance of Veil Da Fictional Bae. Yo…come on man, how hot is it in the Lazarus Pit adjacent lair. Veil come out in the stunning green dress and the slight perspiration…like, come on, play fair yo. I swear they were in wardrobe like, “let’s give her a dress the color of Gaia and add some A Time To Kill Sweat.” They out here trying to jump off some poor kid’s puberty, man.

Veil goes to develop the x-ray and she sneaking around with the quick hands so you know she up to some shit. Turns out, Quinn got a mass in his head the size of a damn meteor, but Veil swapping his shit out for a clean x-ray like cats on parole be trying to swap out some clean urine when they see their officer.

Sunny up in the spot getting so fresh and so clean, draped in the smooth black cloth like he should’ve been on the poster for Rogue One or some shit. They get to talkin’ and apparently, Post-apoc Blade is the legendary Nathan “Silver Moon,” a former regent that said “fuck this” to the Badlands.

He said he had himself a family before the brother of a nomad he clipped came and gave his lover and son the rain drop, (dome) drop top treatment. Sunny tells Silver he trying to get back, but Silver is like, nah, Christmas coming to the Badlands, b. Best gift that you can give them is to not come for the milk and cookies they leaving out.

Veil bout to get rid of the evidence of that tumor doing doing the expansion jutsu in Quinn’s head until Edgar come to the workshop with half his hand cut off. So Quinn got some shit brewing and Veil trying to get the intel (and Edgar’s weak ass was sho nuff bout to give it up, but yo, I can’t blame him, I mean…look at Veil yo…), but then Quinn’s boys come dragging in scrawny Gabriel from the south tunnel. Dude was trying to escape but he got caught cuz he ain’t got that Harriet drive in him. Quinn tells Gabriel about when he was sent on the Black Ops mission to kill a rival regent when he merked five dudes in the room and became a legend.

I gotta say man, Quinn should’ve coached college basketball cuz I feel like he could inspire a muthafucka to do anything. He gifts Gabriel the dagger as long as he can cut him. Basically, this how you grow killas, fam.

Sunny wake up to Silver Moon getting his morning training in by cutting flames off candles yo. Your boy got almost 1K tats across the belly. Sunny is like, nah, gotta be more to this life than clippin. Silver like, yo, if clippin’ is wrong, I ain’t never gonna be right.

Waldo preppin’ Widow for the Conclave and dude reflecting on how he’s happy to be back in the game, especially since Quinn retired him once he got his wheels. Widow says she’s fighting for the little guy and Waldo is like…yeah…I know…being flush in leather, fur, and them stilettos probably ain’t bad perks either.

Back on the mountain top, that same screaming is happening again so M.K. decides to go check it out this time. Man, that Akatsuki carrying into the room where Winter Soldier was made and they got Brown Boy Glorious in there!?!?! Nah man…what’s going on. They strap this dude down to the table. They tell dude they gonna take away the cause of his pain and stick two needles in him the size of the fuckin’ space needle, man. WHAT THE FUUUUUCK. Unless they injecting him with some adamantium, this shit is all bad, yo. Ava / Aloy come snatch his ass up before he gets caught.

Ava / Aloy trying to explain to this dude that BBG was a “problem” so he had to be “cleansed.” Yeah…this shit ain’t voluntarily in the least bit. If you here thinking some good gonna come of it, I think you misread the room. M.K. talking about he gotta find out what happened to his mom and then’s he’s leaving. Ava / Aloy is like, nah, they’ll catch you and you can’t fuck with the master. M.K. is like, what, they gonna cleanse me too?

DID YOU NOT JUST SEE WHAT THE FUCK JUST HAPPENED? BBG had pecs inherited from Olympus and they cleansed him, the fuck you think they gonna do to your little ass? Then he’s like, Ava, you should come with me…M.K. YOU DON’T EVEN LIKE HER LIKE THAT MAN. See, this is why dudes can’t be trusted now.

Sunny wakes up Bajie cuz it’s time to go, but Silver been searching for a worthy death. But, actually, he just looking for someone worthy of that 1K tatt. He might put the railroad track on his face like Tyson cuz he running out of room fam.

This shit was glory, yo. Sunny in the Matrix Reloaded attire (imagine Daniel Wu as Neo fam). These dudes fighting all over the gotdamn place man, jumping over and through beams until Sunny literally knocks this dude down from his perch. 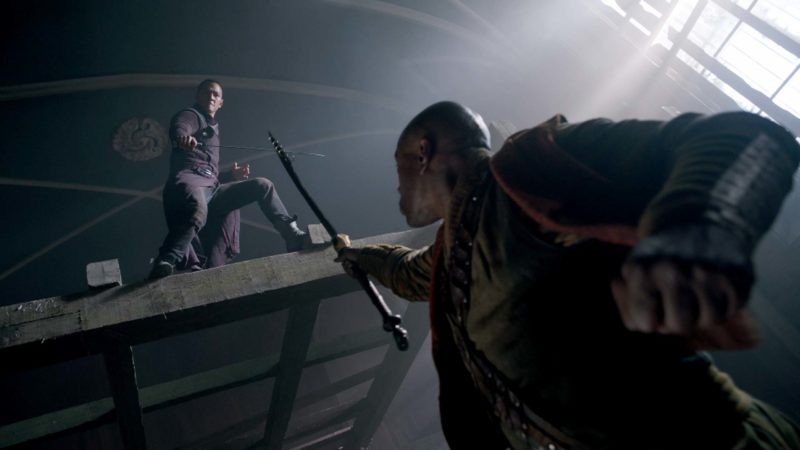 Silver prepares for that downward slice motion, but Sunny won’t give him that. Silver get pissed and try to go for the kill but Bajie hit dude with the one-way boomerang and takes Silver’s killing hand off with a knife. Silver’s legendary blade gonna be their ticket back into the Badlands and all Silver got was to re-enact Luke Skywalker in Cloud City.

Widow (Minvera if you nasty) and Waldo show up to the Conclave, but they the last to arrive. When you killin’ it like Widow, you can’t be showing up early to no party, fam. But also, might be half a hundred of Ryder’s clippers here for “security.” Aiight. Conclave bout to go down and Widow look like she lives for this shit.

Want more Into the Badlands? We’ve got plenty of coverage to keep you in the know.