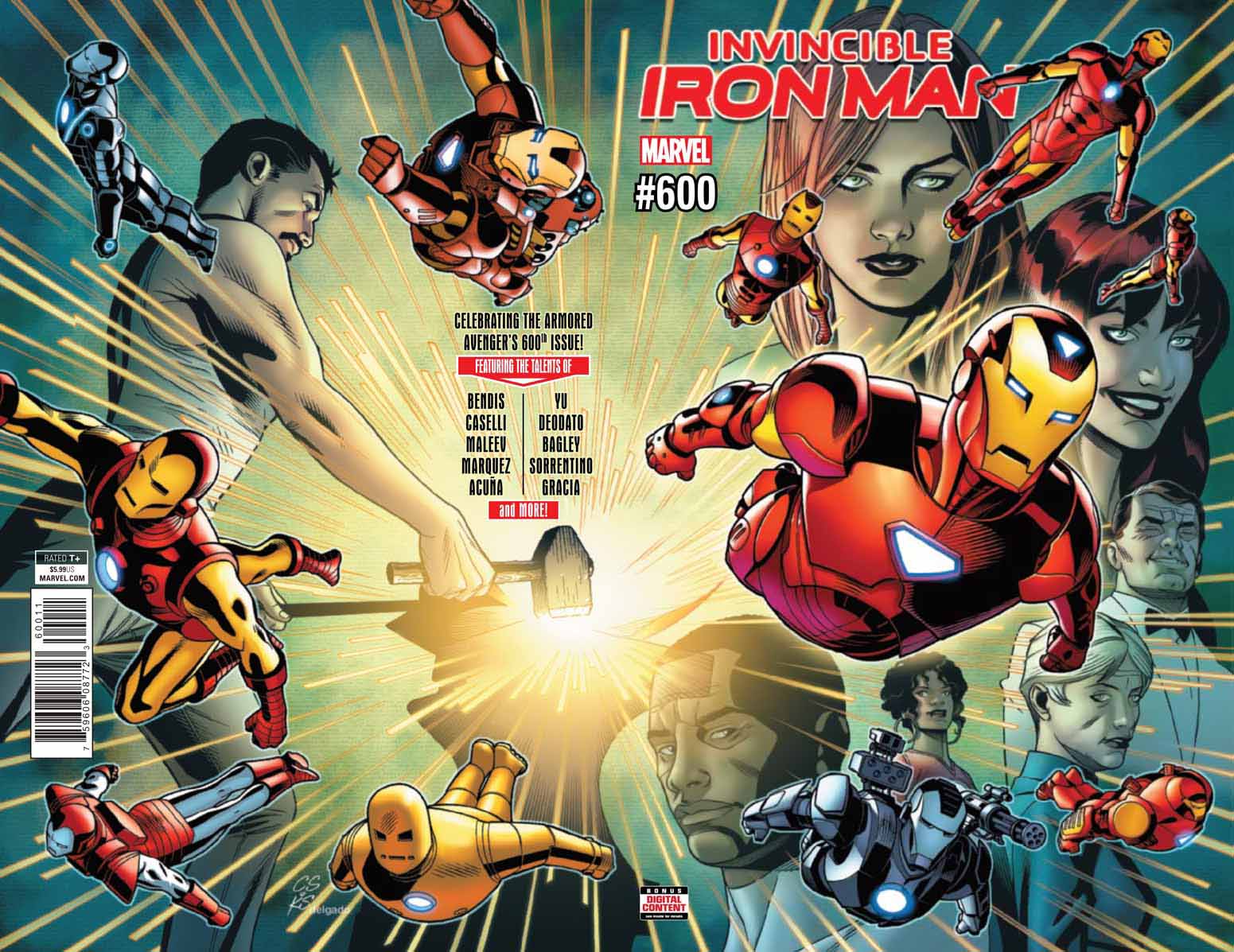 This is it! The last Marvel comic for the foreseeable future written by the indomitable Brian Michael Bendis. Invincible Iron Man #600 marks the writer’s grand finale alongside an army of artists and a story aimed at your nostalgia. I vividly remember picking up New Avengers #1 in 2004 on my very first comic book day. For nerds like me, Bendis has forged the soul of Marvel for the majority of our comic reading years. The countdown has been very prominent these last few comic book days with heartfelt conclusions to Jessica Jones and Miles Morales’ stories. This monumental comic feels like an appropriate end to an era. 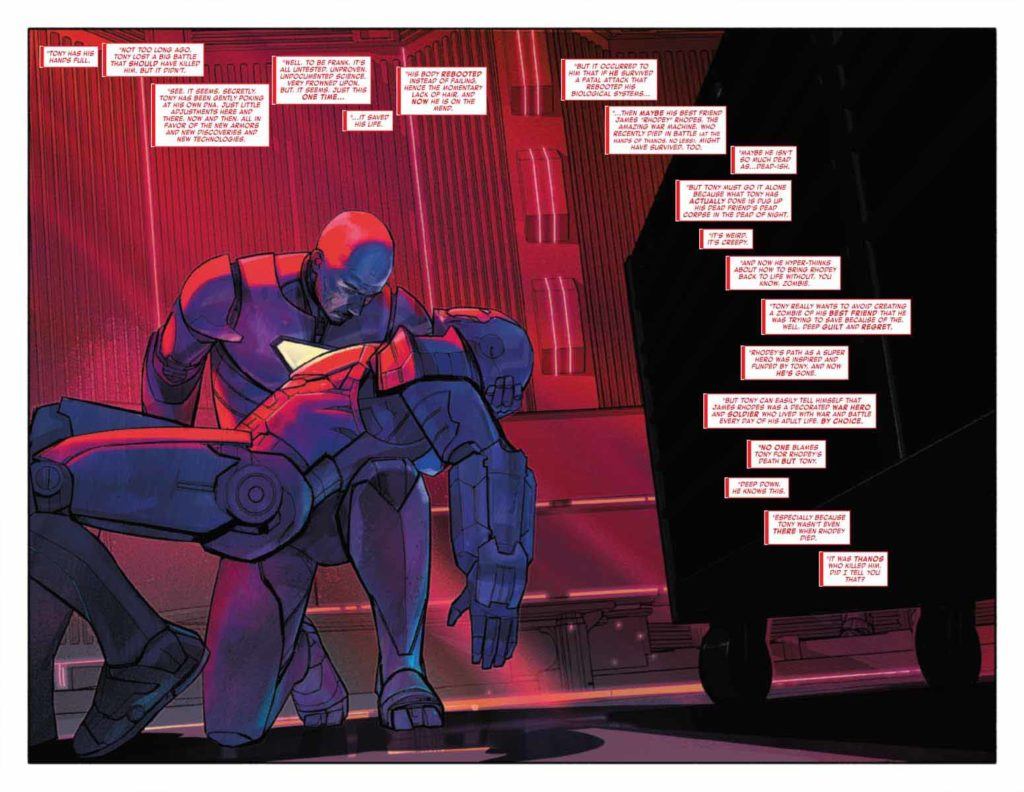 The comic is dramatic, self aware, wacky, and snarky. Nowhere is the wackiness more prominent than the prelude to post-Bendis Marvel. Leonardo Da Vinci: Director of S.H.I.E.L.D, but not really? It’s almost jarring enough to overshadow the return of a beloved character killed in one of his events.
The artificial intelligence replica of Tony Stark narrates the book with a condescension to humans that bordered on the uncomfortable. Really, Bendis? You want to end with, “You know you’re a hot garbage fire of a species”? He takes us through a cascade of the recent adventures Bendis has taken us down with the assistance of artists Caselli, Maleev, David Marquez, Mark Bagley, Mike Deodato Jr and Jim Cheung to name a few.

We’re taken to the bold retcon of Tony Starks’ origin including brand new parents. The crescendo brings us The Hood and Dr. Doom. Bendis has played with Parker Robbins and his gang of lesser-known villains a lot over the years, most recently in his Infamous Iron Man story focusing on Victor Von Doom’s conversion to hero. The fight is made incredibly dynamic by the shifts in artists from page to page. We spend a good amount of time discussing Riri Williams, a character Bendis has impressively championed in recent years. 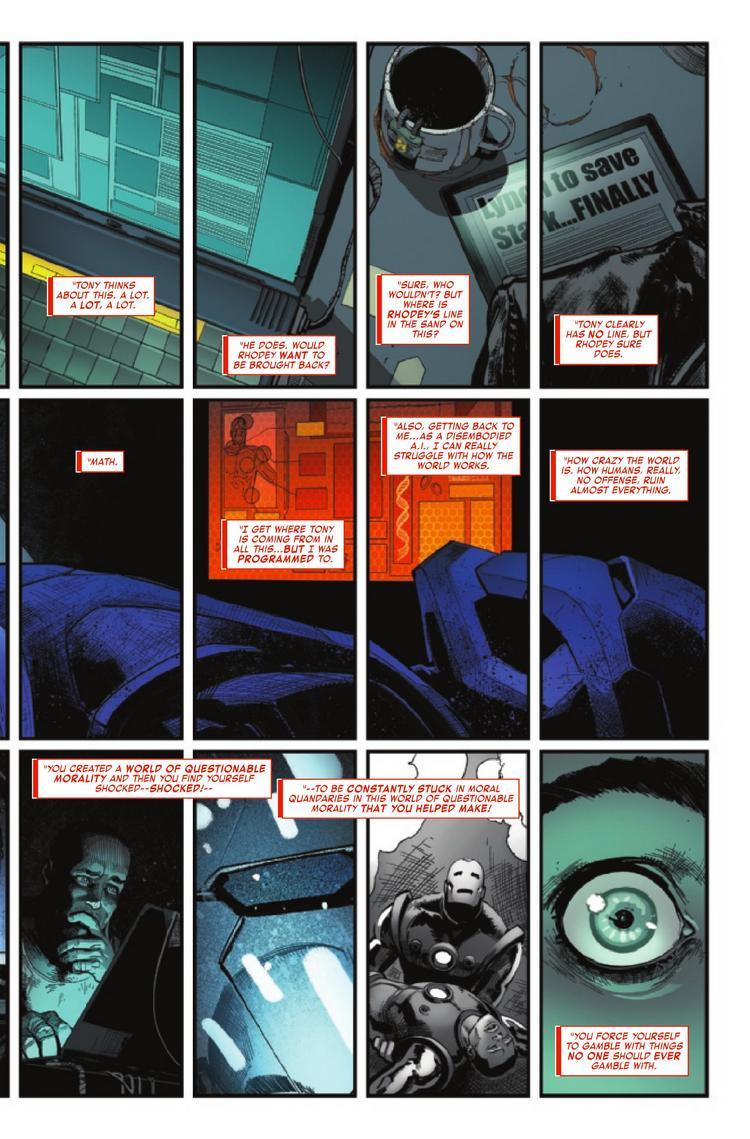 The special treat comes towards the end of the comic where AI Tony discusses Starks’ future. A Bendis co-creation from his amazing runs in the world of the X-Men (Remember when Bendis and Jason Aaron created a golden era of X-Titles?) makes a welcome appearance.

You don’t direct the flow of the Marvel Universe for a decade without making bold and sometimes questionable decisions. This spirit is captured in the book’s self aware narration. He concludes with an optimistic spirit, though. Bendis’ world has been exciting and refreshing, disruptive and jarring. As this chapter of Marvel’s history comes to an end I have no doubt that a generation of comic book readers will remember the Age of Bendis. Bravo.