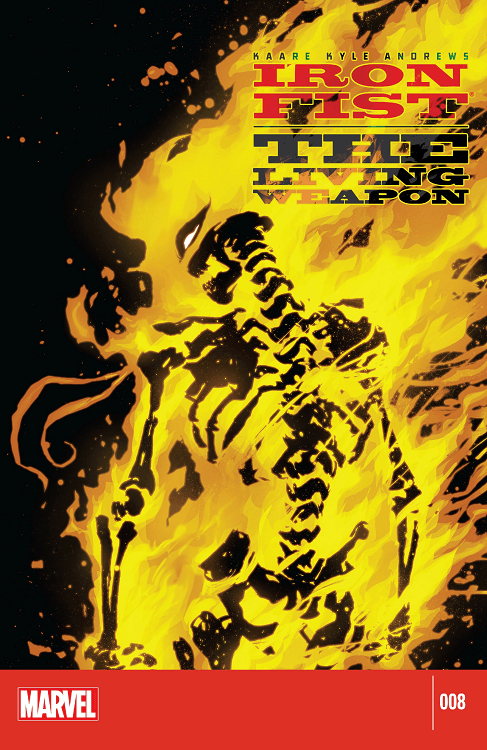 Thank the comic gods for Iron Fist. I’ve mentioned before that this is one of those rare gems in comicdom. Kung Fu comics don’t always work (sorry Richard Dragon…and Shang Chi), but Kaare Andrews just seems to get what makes the martial arts genre work. It’s almost hard to put into words, but not impossible. Otherwise, this review wouldn’t exist.

This issue sees Danny Rand on the road to getting even with The One and his legion of cyber ninjas. We’ve seen a lot of him being broken down and being rebuilt lately, but now we see him living up to the moniker “Living Weapon.” This isn’t the fun loving, wisecracking Hero For Hire we’ve come to know over the years. This man is a guided missile with a payload of roundhouse kicks. Andrews crafts a kung fu legend unlike anything else I’ve come across in my years of reading comics, throwing in modern sensibilities without treading over too much of what makes kung fu stories work well.

Every panel of his artwork is a stylish, dynamic trip that sets itself apart from anything else happening in Marvel Comics’ repertoire at the moment. Dare I say, this is every bit as refreshingly original as the Immortal Iron Fist was. And we haven’t even come to the final act of the story arc.

Bottom Line: He’s been doing an awesome job with this book, but Kaare Andrews is in A+ form this time around. This issue is a pretty good example of why this book is a winner. 9 out of 10