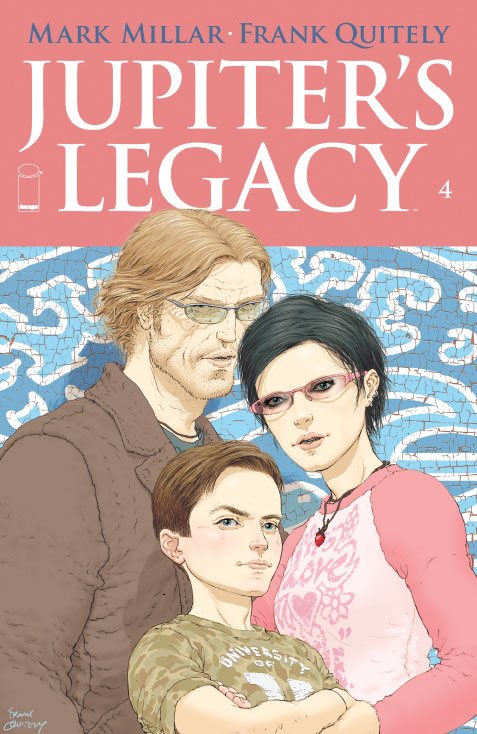 The past and future are one in the fourth issue of Jupiter’s Legacy. A closer look at The Faction’s visit to the island in ’33 is used early on, to set the stage for our new setting in Australia during 2022.

Amazing contrasting themes at work in this issue. Finding out the island was of alien origin and that we don’t actually know why the aliens gave the squad their superpowers adds a level of intrigue to this backstory that just wouldn’t be there if Millar and Quietly hadn’t given us this detailed look at what actually happened when they went to explore the island. Quitely shows off his skills and amazingly depicts this vast expanse of a world that the group descends upon.

Cleverly disguised as bedside storytelling, we find all this out, while also discovering that Chloe and Hutch are both alive and well with their son, Jason, doin’ just fine down unda’ mate! Amidst all of the stories we get a couple of informative tidbits.

2) Sheldon must have stolen Grace’s heart from right under George’s nose OR The Utopian was just a boss, she would up in his arms when her and George fizzled out and he got jealous. How jealous? Supervillain jealous. Meanwhile, Jason has been out there on his young Clark Kent Smallville game, saving lives on the low and raising a few red flags on the Walter and Brandon   Superhero watch.

Did I mention they turned the world into an over-surveillanced, wanna be utopian world without accomplishing all those innovative ideas and objectives they were so high on before assassinating The Utopian? Yeah, well they did and now it looks like they have their eyes set on Australia and the peculiar heroic-like feats popping up every now and then. They’re not playing ANY games either. They got the professional bounty hunter out here looking like a mafioso Boba Fett. Jason better start listening to Ma and Pa before he wind up six feet under.

Solid issue that does a good job of connecting that insane climax in Issue 3 to the new world we are introduced to.