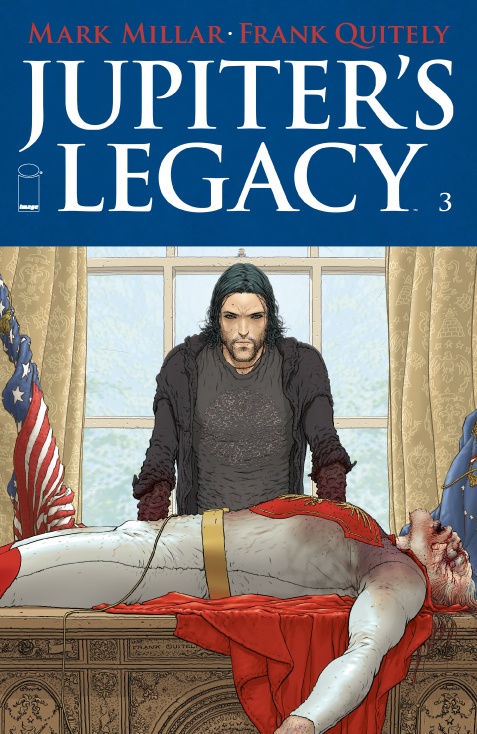 Well that was fast. Millar does not waste any time setting in motion this mutiny. And I’m sorry, I’ve done my damn best at limiting big spoilers for this series, but this particular issue is just too poppin’. Oh and I have another apology I must issue. My bad ya’ll, my CBG (comic book guy) has been criticizing me for not showing Quietly more love during this look back at Jupiter’s Legacy, so I’ll be sure to include all of the glory Frankie Q exudes page to page.

Chloe is on her secret identity filled way to mom’s house so she can retain her advertising contracts, following that drug induced hospital visit. She got put on super thug probation and is having a real ass heart to heart with Momma Grace Sampson when out of nowhere, WAM!!] Shorty gets blasted through the living room into a van parked out front.

Frank Quietly goes on a visual rampage in this carnage laced issue. Not only does he capture the violence and destruction magnificently, but his ability to depict the fear and despair of Chloe’s mother as she bursts out of the house, only to be greeted by dozens of charged up Nights Watch-esk turncloaks is remarkable. Then that last shot of Grace Sampson, crippled, and impaled with dozens of arrows, swords and spears throughout her body…

Chloe and Hutch elude Uncle Walter and his henchmen using boo thangs teleportation device. Guess they’ll be on some Carmen Sandiego Shit from here on out.

After all that wild murder and deception, Millar and Quietly decide to one up the first half of the Issue and completely demolish any inclination that I knew a dam thing about this story and throw a nuclear missile wired meteor at The Utopian. It’s a good thing The Utopian eats nuclear warheads for brunch because all of the Utopian’s former teammates begin wrecking house on his immobilized body. Then Brandon hops on the scene and tells everyone to hit he bricks and madness ensues.

Millar really has the characteristics of The Utopian DOWN PAT. Every time I see this guy in a big decision situation I expect him to use his head and make the logical choice, but he reverts back to this age old way of thinking and it’s infuriating. Luckily in this case, real recognize real, and I can’t help but give that slow nod of approval to the writing that has my brain tap dancing for unexpected joy. The Utopian is face to face with his son.. can’t get through to him and show the misguided you how he’s being taken advantage of. On the flip side, Brandon is so hopped up on the leadership Kool Aid that he does the absolute worst job of explaining why he would turn on the man who sired him and ran the superhero squad for nearly a century.

The Utopian is face to face with his son… and receives the most intense optical blast, at point blank range, that I’ve ever seen. The final image of The Utopian and his bone seared skull is chilling.