As I’ve said from the beginning of this arc, the Justice League fighting Darkseid is very familiar, but this would not be a familiar telling of this story in any fashion. The inclusion of not only The Anti-Monitor but a host of new characters on both sides of the conflict has made this story larger with farther reaching implications than previous stories of this nature. The Justice League itself is split between the involuntary expulsion of Superman and Lex to Akropolis and voluntary mission of Batman and Hal to find the source of the Anti-Monitor in learning how to stop him. 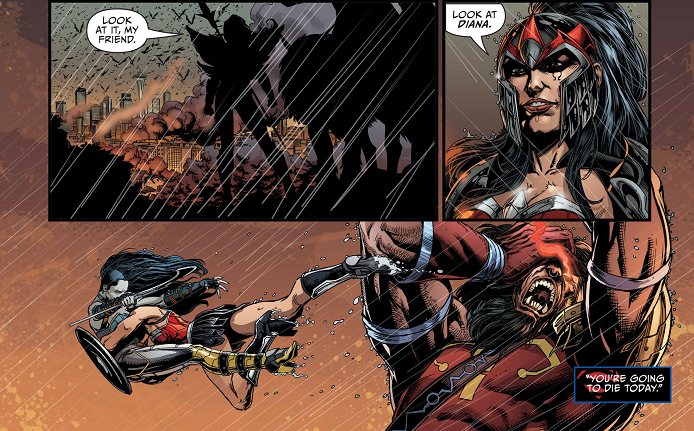 As you would imagine, the conversation between Hal Jordan and Batman on his new, literal high horse is especially biting, but doesn’t distract from the discovery of Anit-Monitor’s origin. The story is being woven on two pivots, the relationship between the Justice League itself and the competing back stories of both Darkseid and the Anti-Monitor. This is especially evident on Akropolis where the tainted sun has corrupted Superman and Lex seems like the reasonable one between the two. Or that could be Superman’s inner demon finally looking at Lex like, “yeah, I’m tired of your shit.” Either way, it might be a long trip home for Lex.

If I had any complaint, it’s that the inner dialogue doesn’t usually have this many people contributing to it and it becomes a little dizzying on who is talking or who they are talking to near the end. But the end of the book is what to tune in for. The last couple pages on the battleground make up for the any confusion that happens previously as we are shown what will be the real threat to Earth and the League.

I am loving Jason Fabok’s art on this book. Just as the story is familiar yet wholly different, so are Fabok’s interpretations of the characters in their current situations. The transformations of Superman and the Flash are among his best work on this book, not to mention the lieutenants on each side of the war that I’ve mentioned before. He makes this story feel epic and dark befitting the narrative.

Justice League #44 continues the Darkseid War in epic fashion, letting you know the end of this story is far from over and that the repercussions might linger longer than we previously thought.