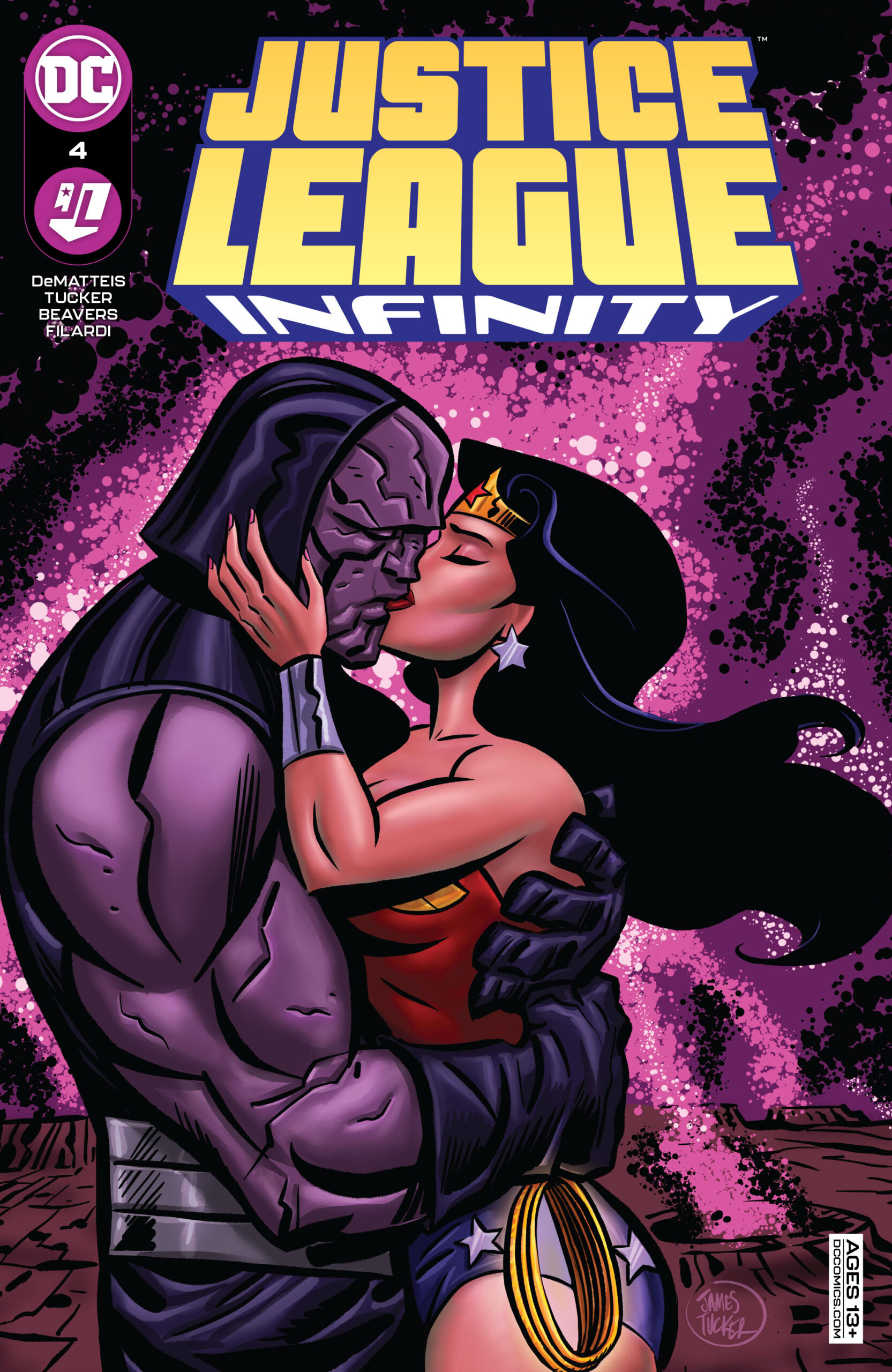 Diana and Darkseid sitting in a tree, K-I-S-S-I-N-G. That’s right, as the cover suggests, Justice League Infinity #4 brings us all the hot and steamy Wonder Woman & Darkseid content we didn’t know we needed. Actually, we probably didn’t need it. But I’m not mad that we got it to be honest.

But for real, this was a story more about love than it was about lust, so even though that cover makes you think there’s some wild stuff happening inside, it’s not like that. What we really got in this issue was an alternate Darkseid who is more simp than he is a slayer. And I absolutely love that.

Justice League Infinity #4 follows Wonder Woman as she’s plucked from her universe and dropped into one where a version of Darkseid lives on a barren Apokolips all alone after the death of the love of his life: this universe’s version of Wonder Woman. He’s haunted by a personified version of the Anti-Life equation that’s hellbent on reminding him of what he’s lost. When Diana shows up, she beats his ass, and I’m not gonna lie, it was kind of fun to see Darkseid all sad and soft like that. He took that beating like a champ. I wanted to hug him afterward.

Darkseid tells the saddest tale he could have told to get me to care about him, and it has to do with Wonder Woman steering him away from the error of his ways and accepting love into his life instead of having it be controlled by conquest. Look, I understand that this is an age-old, antiquated story where a woman makes a man better and then dies. But something about how DeMatteis and Tucker wrote it made me forget all about that. I honestly didn’t make the connection until I started writing this review. What does that say about me?

After some back and forth, Diana accepts that she’s in another universe and agrees to help Darkseid take down the Anti-Life Equation. But she doesn’t die. So yay!

My favorite device in this series is the narration. The perspective always depends on who the protagonist for that given issue is. But what I love about it is that it’s written after the events of the conflict. You don’t know when, but the protagonist is always talking about the events that you’re reading in the past tense. It’s a really interesting way to frame a story. You would think it would make the stakes seem less important, knowing they survived. And that may be true, but it always has me thinking about how they got out of that situation to tell this story in the first place. Sure, they made it. But at what cost?