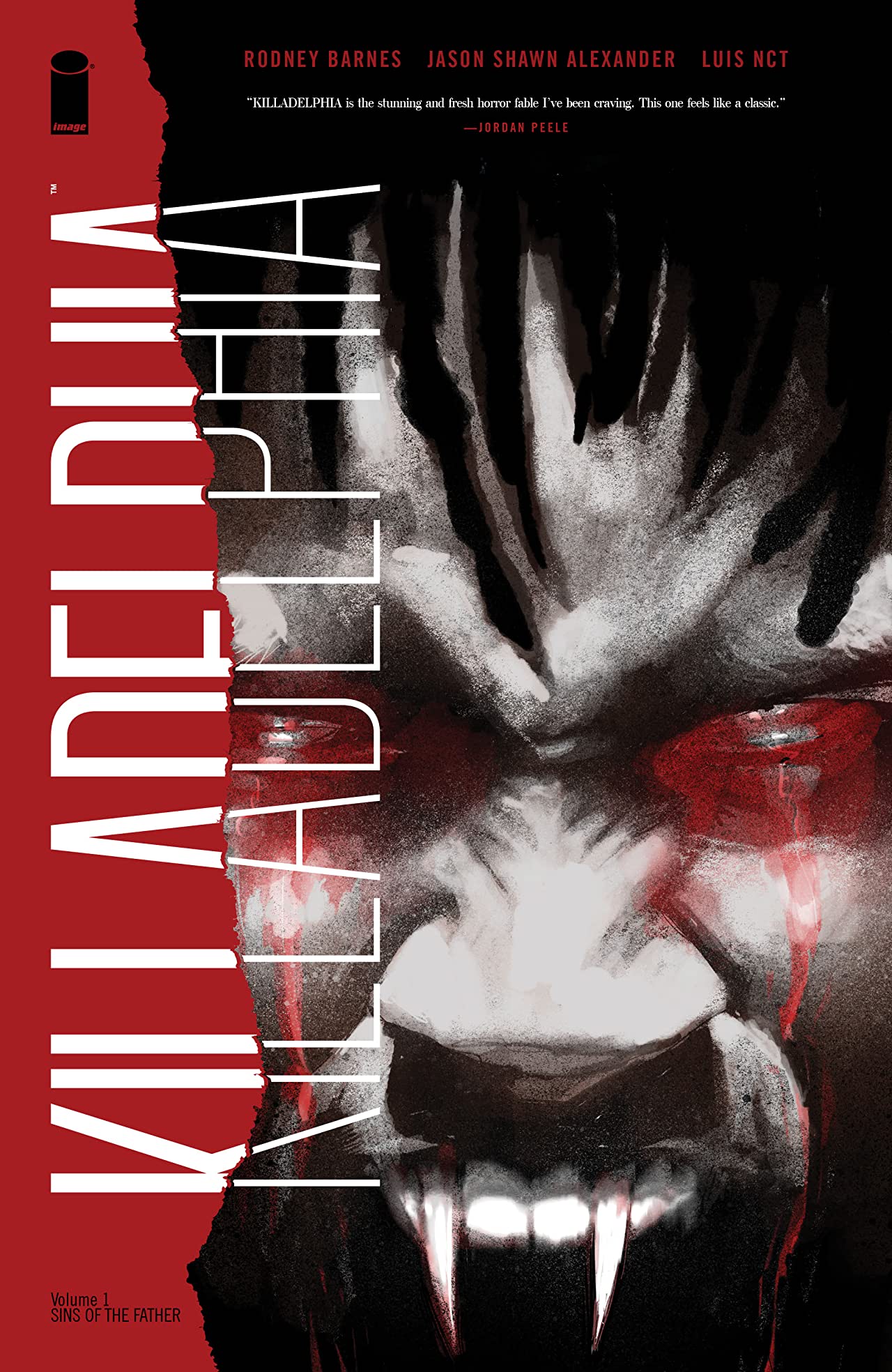 What’s up nerds? I hope you’re all feeling better as comic distribution is stabilizing. Between the last few months of crazy, many comics fell to the wayside for me. Imagine my surprise when I saw that the Killadelphia Vol. 1 collection was being released last week. A recollection of the first issues’ magic came back to me, and I immediately downloaded the issues I didn’t have. It was really a perfect storm reading this collection now. These past few months have me filled with emotion. I’m frustrated and angry that while Black bodies are falling disproportionately at the hands and spikes of the police and coronavirus, I still must argue for the existence of systematic racism against some. I feel underwhelmed by the performative “wokeness” of companies trying to convince us that they’re “down with the Blacks.” I feel tentative hope marching down my street with a figurative rainbow of people shouting, “Black Lives Matter.” I feel the inevitable entanglement from the wonderful representation and disappointing mythologizing of the country’s history seeing Hamilton. With this concoction of conflict in my head, Killadelphia provided a wonderful outlet.

It makes sense that a powerhouse writer/ producer like Rodney Barnes wrote this because I need this to be on screen. Teamed with Jason Shawn Alexander’s stunning visuals, the book tells a quick paced, succinct story while addressing a plethora of complex themes. This is a story about families and all the beauty, pain, solace, and horror that can manifest. This is a story of cultural appropriation and the lost ways of the ancients. This is a story about the Black person’s experience in the United States over hundreds of years and the rage it can and has fostered. I look forward to sharing some of the golden moments of this book because I think I can manage making you fall in love with it without spoiling anything substantial.

The Power of the Black Family

The heart of this book is familial relationships. The most prominent chamber (left ventricle?) is the fraught relationship between James Sangster Jr and his late father. The story starts with Sangster Jr coming back to Philly on a train from Baltimore and it’s implied that his father is a big reason for his leaving Philadelphia. This relationship can’t be understood without mentioning the Sangster family matriarch. She dies well before the events of the book but seemed to be the cornerstone of the family. What jumped to the front of my mind is the apparent inability or unwillingness of the men to be emotionally vulnerable. I am reminded how often I’ve noticed that the women in families are often saddled with the emotional labor of managing the mental health of the family. My experience has been quite different so I can’t relate to a childhood so traumatizing it’d keep me from a parent until they died. I reflexively want James Jr to find peace through forgiveness and acceptance, but we can’t deny a person’s truth because we haven’t lived it. I just need these emotionally stunted Black men to be ok!

The other two relationships are that of a grandson and grandmother, also a pair of orphaned sisters. The former is a familiarly modern Black story. On her hospital bed, a less lucid grandmother thinks back to her family. We learn it’s a tragic story of a family stricken with the loss of her daughter; the grandson’s mother. The sisters are a bit older, from the time of chattel slavery. They experienced firsthand the original assault on the Black American family; losing their parents at the whims of human traffickers. They’ve survived to present day thanks to their acquired vampirism. It doesn’t take much imagination to see these two girls through the lens of Black history. They embody the generational trauma that still haunts Black people today. An interesting feature of the interactions here is the question of what we do with newfound power and freedom. Immortality is embraced by some of the black vampires and not by others. The ability to transform into a bat (BAT!) isn’t on the menu, but I think about how hard my grandmothers worked to give my parents the opportunity for a life better than the ones they grew up with (who in turn, did the same for me) and it feels like a superpower. Some of us are warriors who dedicate our lives to justice and to the well-being of our families. Some of us are tired and just want to rest. The black vampires and their families reflect this gradient. It can be jarring to exchange ideas with someone who wants to exercise their freedom differently than you, especially when it’s family.

Two of the Black vampires have incredibly cathartic, terrifying moments. As you can imagine it’s hard to see Black children unafraid and attempting to murder police in cold blood and not feel anything. I wouldn’t call the sentiment expressed in these scenes anti-police, murder-porn. It is clear that these characters (at least at the moment of the encounter) aren’t righteous avengers. My mind goes to articles I read talking about how Black children are viewed as older and more threatening than their white counterparts. Watching a kid with long fangs charging an officer, taking bullets to the chest without being phased could represent how our Black children are perceived in minds forged by white supremacy. Part of me is horrified by these images, another part is empowered at their sight of strength and resilience. I appreciate the juxtaposition of the vampires in a deadly attack mode and when they are in calm conversation. When I hear police describe their fear and the victim’s supposed threats to the officer’s safety, I can’t help but think, “that ‘animal’ is a whole person and not the scary caricature you’re trying to paint.” It’s appropriate to think about the environments that send these children on a collision course with law enforcement in ways that affect them well into adulthood (if they survive). In this comic, the history of American white supremacy is directly responsible for the vampirism the Black people of Killadelphia face.

You Scared Me, Colonizer!

My favorite creative choice in this book is choosing the Caribbean as the source of vampirism. My least favorite choice is selecting a founding father as the original vampire (at least in the states). The book subtly plays with themes of Black culture being appropriated and then used to further Black subjugation. Historically, music comes to mind but in this book it’s vampirism itself. Optimistically, it also shows acts of that culture being reclaimed and used as a tool of self-actualization.  I particularly like the idea that there’s this ancestral connection between the current and past African diaspora that survives the brutal attempts to sever it. A character is able to unlock a power of the soul that the white appropriator cannot.

All of these complex themes are woven into this impressive story at a time when they need to be addressed the most. I fully recommend picking this collection up at your local comic shop and follow the ongoing series. Stay safe out there!