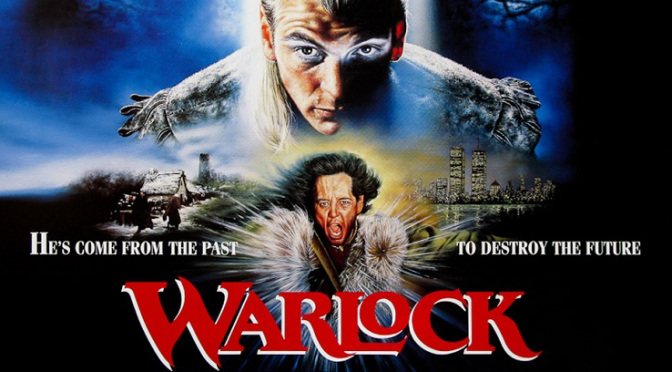 Usually, when I do one of these guilty pleasure spots, I’m talking about a movie that I watched during childhood and loved. I discuss how I have all these fond memories of it and how I get all the nostalgia feels watching it as an adult. However, my guilty pleasure today is going to be a bit different.

One day, I was randomly flipping through the channels and saw a movie title that caught my eye. This happened because I mistook the title for another movie’s title, that of The Wizard, which is about a little boy who is amazing at video games and wins a championship title while trying to bring his broken family together. (Yeah, that was the 80s family films for ya.)

Anyway, imagine my shock when I see some super pale, ice blonde haired man dressed in black on the screen, who I knew for damn sure wasn’t in The Wizard. This movie turned out to be, a movie that in part still had a title like The Wizard. It was called Warlock.

The series, which has 3 movies, follows the same basic premise of a warlock from hell tries to help bring Satan to Earth. To be more specific, in the first movie, Warlock (1989), Satan opens a portal and sends the warlock into the future after he is about to be killed by a witch-hunter. The witch-hunter follows through the portal before Satan can close it. Now in the future, Satan tasks the warlock with finding a spellbook known as the Grand Grimoire. In the book is the true name of God, when, if spoken backwards, will undo all of creation, bring chaos, and thus empower Satan. The witch-hunter, with help from Kassandra (who was just at the wrong place at the wrong time and got caught up in this mess because she saw the warlock kill her friend), is able to stop him.

The second movie, Warlock: The Armageddon (1993), also starts in the past. Christian soldiers unknowingly almost help Satan by interrupting a Druid ritual using six magical runestones that was being performed to stop the birth of the son of Satan (the warlock). Being that it was a Druid ritual, of course the Christian soldiers thought anything not of their god was devil worship. Though interrupted, the Druids were able to stop the birth. In the future, two teens (a boy and girl), who don’t know that they are Druid descendants (but quickly find out) stop the warlock aka the son of Satan after he is successfully born from also using the runestones to open a portal to let Satan into the world. They are able to stop him this time as well.

In the final movie, Warlock III: The End of Innocence (1999), the warlock is trapped in a catacomb and gets free. He wants to impregnate a specific girl who is also a witch. Not only that, he wants to use her body to bring his consort’s spirit to the world to be the mother of his evil army; think Imhotep bringing Ankhesenamun back in The Mummy (1999). This is the only one where the warlock is defeated by one person, and it is the woman he tries to sacrifice and impregnate. This movie was a direct-to-video movie, and I must say was not theater worthy. Complete transparency here, I only watched this one in bits and pieces, because it couldn’t hold my attention.

Now that I’ve told you what these movies were about, let’s get into them a bit more.

First, this was a series that maybe should have stopped at one. The first movie was by far the strongest, and the most steeped in a lore that made sense to the subject matter. The acting was the best overall out of the three. Though, Julian Sands plays the warlock in the first two movies and did well in both. Bruce Payne also did well as the warlock (from what I saw) in the last movie. The first movie also had the best ending. It built up to a strong ending that made you want to see how the witch-hunter would manage to take out that warlock.

I believe the second movie suffered from a couple of issues. One was the time in which it came out. The early 90s was a time of teenage love and drama. Shows like Melrose Place and 90210 were dominant shows, so the second movie having two teenage lovers as the protagonists make sense. I also think the movie suffered from trying to make itself different from the first, which I can also appreciate so much. However, that led to a movie that was very much glossed over, just hitting the points but not doing much else.

There are terms in fantasy that explain this idea where you worldbuild but leave enough to the imagination of the viewer to put certain things together. The problem here is that the first movie did great worldbuilding with the lore between the witch-hunter and the warlock trying the find the spellbook, while also sprinkling in bits of knowledge and lore. For example, the witch-hunter uses salt to protect against the warlock because it is pure and the opposite of evil. Little things like this don’t show up in the second movie. One thing the second movie could have done was have the runestones each do something different, but as I remember it, they were just magical, but did nothing special beyond that. It was a missed opportunity.

As for the last movie, I would do it even more of a disservice by saying more about it. Once again, the main thing that I can say about the movie is that I could not focus on it. I changed back and forth between it and some other show I was watching, because it was not the best. I will say that it was a definite victim of the late 90s when it came out. Most of the characters were teenagers of the time, and the lore seemed flimsy.

That is seen in how they shift from the warlock being a liaison to bring Satan here in the other movies to the warlock just wanting to create an evil army on Earth. I think they should have kept that connecting thread and just used some different mythos, but this all could just be me asking for too much. I don’t know what this movie was meant for: was it to finish out a planned trilogy, was it fan-service, or was it just a cash grab?

To wrap up, the movies, for various reasons, basically get worse as they go on. The lore of them is the best thing, especially in the first movie. The acting is 80s, 90s over-serious dramatic acting, but if you always keep in mind when they were made, they fit in to their time period. These are not movies I would just seek out to watch, but if I’m flipping through the channels, see it’s on and nothing else interesting, I might let it play the background. It’s not so bad.

Like learning about our guilty pleasures? Check out some other BNP confession here.