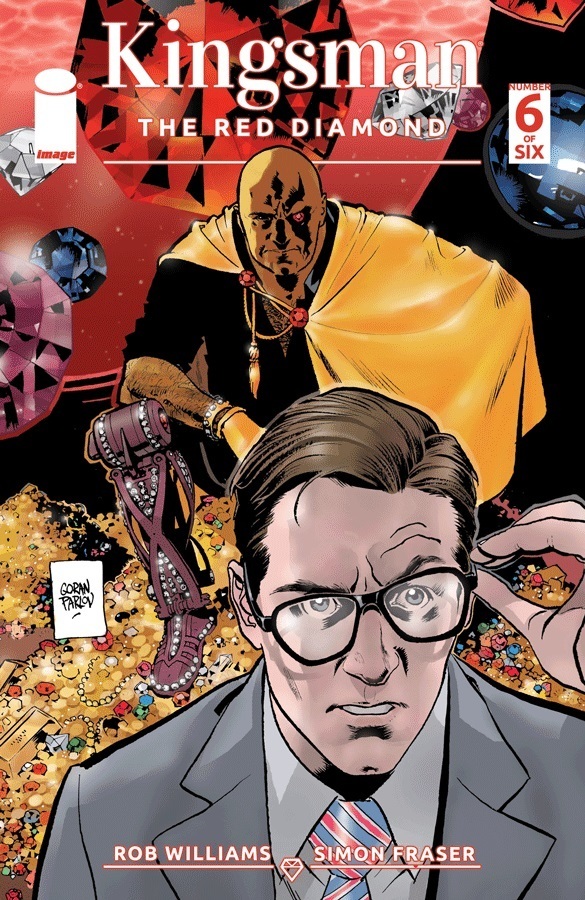 Issue #6 of this Kingsman run picks up right where we left off. We here sitting 20,000 leagues under the sea, cowering in disgust and fear at the sight of Red Diamond’s incandescent glory. It’s all bad fam. Red Diamond has truly entered the void. This cyclops faced, bear chest havin, jaeger leg stompin monstrosity has lost his mind and forced humanity to bend to his very will.

It’s survival of the fittest out here and our English and South African agents are the cream of the crop. Unfortunately, that doesn’t always translate into a job well done. Eggsy and Kwaito ain’t got a plan B. No backup. No cavalry. And it’s in these instances that we see the most impressive aspect of all these Kingsman comics: humanity. We’ve seen the world descend into chaos after the Treeman twins released the computer virus across the globe, infecting all technology. We’ve seen the return to archaic, spiteful times and savagery at the hands of thy neighbor. What we haven’t seen is the resilient human spirit. The desire to survive and refusal to quit. I was pleased to see this gloomy tale take a positive turn as a result of the most unlikely person in the room, and I think readers will too.

Eggsy and Kwaito use the time given to them to tag team the Hunchman of Mariana’s Trench and execute the most half-assed plan ever conceived in an underwater city. Gotta love these moments where your problematic hero keeps it a buck and proudly admits, “I can be a bit dumb sometimes, if truth be told”, then follows up with “BUT I do look fucking good in this suit”. This is why this story has remained a viable comic and flourished into movies. Coupled with good writing and artistic skill, Kingsman is pure, debonair, super spy fun.

This culminating issue was a nice finale in the high stakes world of MI6. Did Rob Williams and Simon Fraser break much new ground or blow minds at every pages turn? Nah, but it was a hell of a fun ride. Eggsy is still a master of that crude humor that’ll have you rolling your eyes, and charm that draws you right back into his antics. The supporting characters in this Kingsman run are arguably more engrossing than our MI6 agent. Red Diamond is a phenomenal villain and one that keeps you guessing what society shattering maneuver he’ll pull next. Williams and Fraser did a nice job bringing this comic back to life.