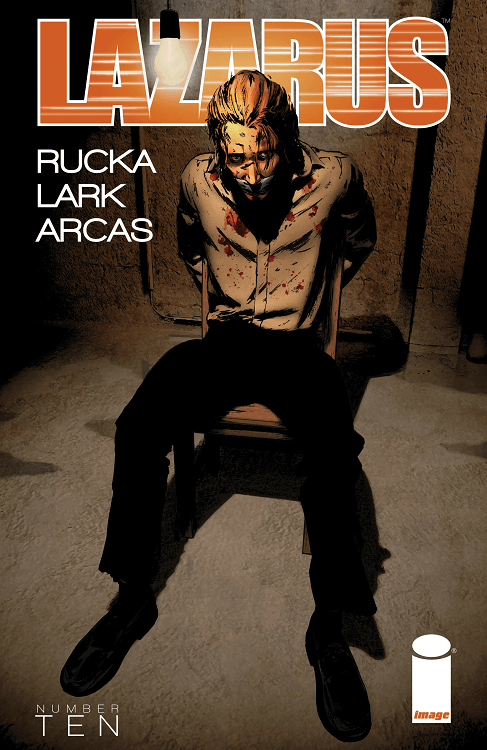 When someone says that _______ is the best comic book on shelves right now, its like when people state what the best show on TV is or hell, show off their Soul Train Award: everyone has their own. Often, saying something is the best of a popular media really just means that many people think it’s really good. So instead I’ll just say that Lazarus is the most efficient and lean muscled story you can find in a comic book (it might also be the best…but whatever). Despite it’s opening pages of the very first issue, Lazarus isn’t a big action oriented book. It’s extremely nuanced and deliberate. And often quiet. The way that Rucka and Lark have been able to do this kind of world-building in just ten issues is astonishing to me…

…where was I? Oh yeah, issue #10. Raise your hand if you kind of sorta forgot about Jonah (half raising my hand). This issue flashes us back four months ago when Jonah, betrayed by his sister in their coup attempts on their own Carlyle Family, has fled the estate. His crash landing into the Hock Family territory (old ally, much newer enemy) puts Jonah in peril and completely dismantles his delusions of privilege and self-importance. While this is an isolated issue on what happened to Jonah while the threat was playing out in Denver for the Carlyle Family, it does a great job of tying back to that main plot and setting up the next arc of this story which undoubtedly will be war.

What makes this comic book not just really, really good, but at times brilliant is the subtle ways that Rucka and Lark show us glimpses of really big picture themes. This imagined world, is terrifying and I’m not sure I always appreciated that before seeing how the Hock Family governs it’s people. The light touches of propaganda against the Carlyle’s, the (not quite) lies about slave camps, and the seemingly “mood modifier” medication that the Waste receive. The small hinting of some “Lannister” relations by Hock allegations towards Jonah. The hint at age modification.
****Spoiler*****

Whoa, did you guys catch that Hock said it’s been 40 years since he saw Jonah? There’s no way that Jonah can be 40 right? It never dawned on me, even with Forever’s “genetic creation and enhancements” that there would also be such technology to extend or prolong one’s life. Hock saying he wanted to be young again? Said he had his falling out with Carlyle 60 years ago? Maybe that’s been hinted at before, but I never caught it. Gotdamn these guys are good.

****End Spoiler****
A lot of creative teams would spend a lot of time on these themes, but this team is so efficient and dropping these nuggets hear there, that they become part of the narrative without explicit explanation.

Yes, this has become my weekly love fest for one of my favorite comics, but its deserved as this book is consistently great. They take a left turn here with the focus on Jonah, but its actually all part of the larger scheme and means that anything could happen in this next arc.