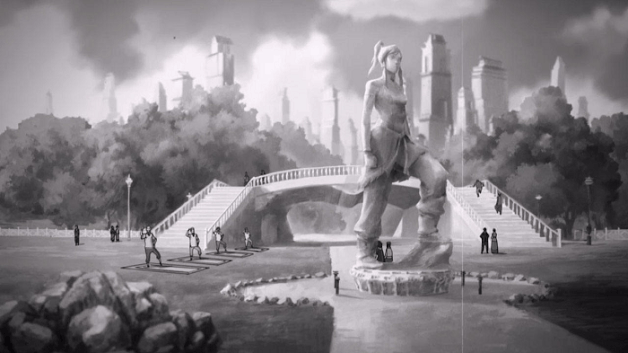 So yes, the time is upon us. We back for one more job, like the heist flick that is bound to NOT go according to plan. One last score, yo. Book Four bout to put a nice end stop on the Legend so you know I had to break out the waterbending chart that Katara stole back in the Last Airbender series and make sure my form was tight. Yeah, lets dive into the beginning of the end.

Welcome to Republic City: Harmonic Convergence +3.5 years! Ain’t too much changed except they found ways to make money off the vines growing through people’s dining rooms. And they finally wised up and gave Gawd Body her own statue in newly minted Avatar Park (take that internet). They got Korra immortalized like she used to rock the pinstripes for the Yankees. And its been erected in the same spot your girl was homeless and firebending fried fish when she first got to the city…Yo…I told myself I wasn’t gonna get emotional over this… 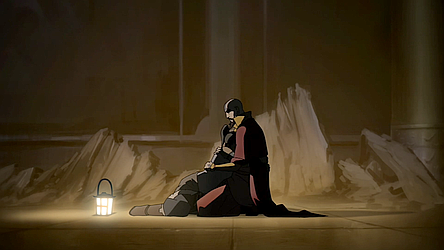 Asami Da Fictional Bae aka Romeo must Die aka Write My Hair Flip Off in my Taxes is BACK! Asami got a new haircut too, the type you get after you graduate with your masters but before you start the PhD program. Earth Prince Wu come over spittin that Carl Thomas in her ear. But…not the first album…so…

And Asami is not here for any of this.

For real, if you Asami, you like, my ex slangs lightning and my best friend slangs everything, what can you do besides wear clothes that are too big for you? I don’t blame the Prince for trying to spit, but yo, Neo Soul is dead bruh, you gotta update the filter. But seriously, Asami gotta be sick of this shit. What is the street harassment like in Republic City? Are cats sliding down them vines spittin that bullshit at our girl? Unacceptable.

Speaking of exes, welcome back Mako. He gotta hair cut too (yes, this will be a theme). Your boy is the private bodyguard for Prince Tommen Baratheon of the Earth Kingdom himself and he is already FED UP. I mean, he’s got a terrible assignment, his ex-bae out here lookin right and opening a train station, and he looks like he went into a barber shop and said, remember that one secret service agent that didn’t get any speaking parts in that mover about the assassination attempt? Yeah, give me THAT shit.

You know how I like my Lin and Tenzin re-introductions: sans Prince Wu. If I order the Lin/Tenzin special and they serve that Prince Wu on the side, I’m sending that shit back and then going into kitchen and confronting the cook like Johnny Depp in Once Upon a Time in Mexico. This cat out here doing THE MOST already. Though, I can’t crush the Prince too much for making the same joke about the Earth Queen that all of us have been making for the last few months. But yo, why does the Earth Kingdom have North Korea’s ruling lineage? Gotdamn, nobody competent with royal blood in that muthafucka?

Speaking of the Earth Kingdom, it is the fucking worst right now. They should just call that shit Zero City and hope that during the revolution, some genius kid had his parents murdered and that resulting PTSD drives him to become a vigilante for justice.

Bandits really out here snatching the already torn clothes off of peoples back. Well, until the Wing-Ops squad catch up with them.

Opal and Kai out here BENDIN OFF DA BISON, son. They young, but out here handling business…for the time being. Turns out the Air Nation have become the World’s Police and really are spreading themselves thin everywhere.

Check in time and Bolin lookin slimmed down (and not just the hair cut) in his MetalBender (but he don’t metalbend) uniform. He’s rollin with Kuvira to help reunite the Earth Nation under one rule (foreshadowing tells me that may not be under Prince Wu’s lame ass). Varrick (who is quite possibly allergic to jail) wants to pop some bubbly but Kuvira ain’t here for your 90% victories, b. This shit is serious. Nation Building is hard gotdamn work. And speaking of that “GOTDAMN WORK” Kuvira got some. FOR AYEBODY.

So, my benders…lets talk about Kuvira. Can we talk about how she lookin like Magneto circa ’87? Or Michael Jordan circa ’87? She out here bending like Kobe when he still had the afro and the Los Angeles Lakers still existed. She really out here on some “To me my Earth Kingdom” type shit.

Meanwhile, Prince Wu been so busy getting ready for his four hour spa treatment, he didn’t know the people been waiting on him like felons be waiting for informants to come visit they moms back in the old hood. They try to assassinate your boy with the strawberry pie, but Mako is there to swoop him up.

And if conquering the Earth Nation wasn’t enough, Kuvira out here trying to conquer that Beifong lineage by marrying into the family. Opal is pissed. Everybody else just trying to stay the hell out of the line of fire.

And wait, wait, wait…Bolin ain’t just on this unifying mission,he’s a…company man? Damn my lavabender, I hate it had to be you. Corporate Bolin on some, “I’m not a leader, I just bend a lot.” He finally reunites with Opal but after the governor tells Kuvira to get off the sticks, Bolin just packs it in. Opal ain’t really trying to hear Bolin on this “peacekeeping mission” bullshit and pushes him away.

Then she hit him with the, “and by the way, I haven’t eaten kale in three years. Air Nation ain’t about that softness. Do you see how I’m rockin this new wingsuit. Take you and your shoulders on somewhere.”

Three years later, everybody got a different hairstyle except for Kai, who is still rockin the same midair collision on his head. Kai’s hair cut is the reason Justin Bieber’s barber gotta sign a confidentiality agreement fam. He look like he got pranked during a sleepover, except in the morning he looked in the mirror and said fuck it, I woke up like this. #WILDERNESS

Meanwhile, bandits set their chill to subzero. They jackin for beats on land and air? Who funding these dudes, the Koch Brothers? They Ocean’s 11 the Bison and then slid Kai some literature about voting restrictions for all the Earth Kingdom people without proper ID.


[divider type=”space_thin”]
After all the goods are stolen, Earth Kingdom gains another town. Surprise, surprise.

Back on Air Temple Island, Mako gettin the worst news ever

He’s going to Ba Sing Se with the Prince after his corronation. Lin hit him with that “Yeah…about that being a detective thing.” Eventually, the boat from South Water Tribe shows up with Korra’s dad, Korra’s Polar Bear dog, but no Korra…

So where Korra at b? This has been a good episode and all, but I’ve been sitting here for 20 minutes waiting on Korra like:

She been off the plantation for six months now and it turns out, she been getting worked in the same bar Wolverine was making that petty cash in during the first X-Men film….except Korra getting handled like an Amazon package during the holiday season. The only thing Brown can do for her right now is apply some foundation over all that bruising. It is ROUGH out here for Da Gawd.

Korra hasn’t taken a beating like this since Tonraq caught her Earthbending a platform up to the bedroom window to sneak out of the house. She gets tossed some pittance for getting washed all night in the arena before ol boy hit her with the Kellz remix “You remind me of my Avatar.” But Korra ain’t tryin to stick around for the rest of the hook fam. Things are as bad as they’ve ever been.