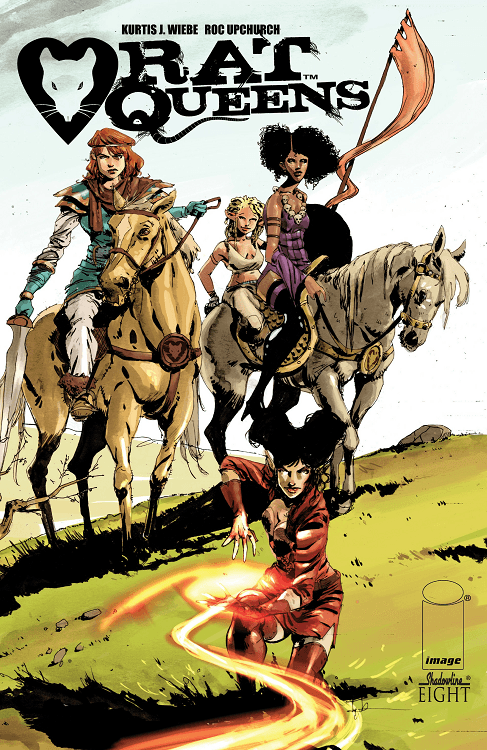 RAT QUEENS.
This issue is probably one of my favorite reads of the year thus far, and it’s most definitely my favorite of the series. It’s so incredibly written that despite being tossed head first into a Violet centric backstory, I’m not complaining. Like, I ain’t even mad. Weibe can play with my emotions anytime if this is what he’s capable of. Lawd yes.

We begin (and end) focused on Vi. We’re clearly not in Kansas Palisade anymore, we’re in the lush bedroom of a bearded and pre-Queens Violet, daughter of the mighty (and wealthy) Blackforge clan. From the second page on one theme is apparent for this issue. Tradition.

She really is sexy with a beard.

Vi made reference to her glorious beard in prior issues, once remarking that she was thinking about allowing hers to grow back. Clearly she wasn’t playing. Not only did she sport one, but her mother and presumably other dwarven women do as well. Later in the issue her mother recalls feeling proud when Vi first became stubbly as beards are revered as a sign of womanhood and maturity. If I’m being honest, the whole set up of this flashback is extra Meridia a la Brave, sans the Mommy issues. We find out Vi is sporting this fancy smancy gear because her father is throwing a huge tournament in which her twin brother is expected to battle for the honor of their clan while she models armor. BRUH. If you know anything about Violet by this point, you should know how irritated this makes her.

In the tournament we catch a glimpse of a black dwarf (F*** YEAH!) and meet a badass beardless female warrior who blows.Vi’s.mind. She not only puts our ginger dynamo up on game about rats, but she also tell her in no uncertain terms that both tradition and gender roles can go die in a fire. Vi’s response to this? Beating the snot out of an old pervy dwarf who publicly sexualizes her and shaving off her beard (with the help of her supportive mother). The sudden plunge back into the present a few panels later left my mouth hanging open for a good 10 seconds.

Gender dynamics aside, it’s the writing that has me so on fire for this issue. The relationship between Violet and her estranged twin brother Barrie is so much like my own with my older brother (named Larry, oddly enough) that I almost called his ass up and challenged him to a game of Horse. I started the book wanting a linear continuation of the previous issue, got lost in the flashback, and was returned to the present confused yet satisfied. While this issue isn’t necessary to understanding the main storyline, it was a welcome detour. I completely trust Wiebe and the journey he’s taking us all on. I can’t wait for #9 to drop.