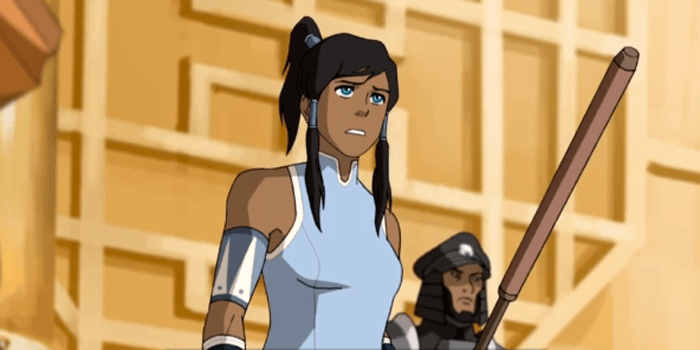 *Editor’s Note: I wanted to take some time off from recaps, recharge the batteries and all that but since Nickelodeon gave us a week notice and dropped the new season like Yonce was on the track list, I had to throw the cape off like James Brown and come back to finish my set. Hope you enjoy.*

Book 3: Change / Part I & II
Spoilers do not give a good gotdamn about your waterbending technique on spirits

We kick things off with everyone’s favorite crazy ass uncle getting his spirit connection on and trying to up his crochet game. When he re-enacts that Charlotte takes a tumble out of the tree, he discovers he miraculously has air bending powers. Somewhere Cooper Manning (Peyton and Eli’s older brother) is sitting at home thinking “this is some ole bullshit!”

Our first look at Korra in Book 3 and she, wait, what, is that…is that an air glider. Ohhhhhhhhhh shit, that air glider finally got parole?!?! Aang putting them Makaveli mixtapes out and nobody told me?!? And what does Korra use it for in this first scene…landscaping like she on HGTV Curb Appeal or some shit. Maaaaan, listen. The Harmonic Convergence, which kind of did sound like a bad idea at the time, has led to these vines overgrowing Republic City. The capital lookin like Rise of the Planet of the Apes out chea. Korra been working on a solution for two weeks, but nothing works so she up and glides to let the people know.

…and the people let her know she done fucked up. This is like if President Obama showed up at CPAC, b. This is like sending Nelly to give a women’s empowerment summit at Spellman. The people are FED UP. The Avatar got the same approval numbers the hood been giving President Reagan for three decades, fam. Shit gets so stressful, she is about to put the paws on the actual president before Beifong steps in. And hellllloooo Asami. We missed you, especially when you were just relegated to playing the bankrupted disgraced heiress who was only around to pick up them Mako shavings that the Korra relationship left behind. Here’s to hoping she plays much more of a pivotal role this season.

Speaking of Mako, why the Gawd sleeping under his desk like George Costanza?

Needless to say, your boy is stressed all the way out. He gets that Hope Solo call saying there’s been a domestic disturbance and investigates it. Turns out, some other cat caught that Hurricane Carter too and is on the loose.

Back on Air Temple island, Bumi finally convinces the fam he got the juice now, when Beifong and Mako show up to say they got an air bender of their own running around the capital. Mako gotta solve this shit man. If you gonna get your Derek Jeter on and run through the most popular women in the city, you gotta handle it with some Derek Jeter “I don’t give a fuck” too. Your boy lookin like Pre-Mariah Nick Cannon when he had to show up at the MTV music awards and he still had toothbrushes at half the R&B Song of the Year nominees homes.

Can we talk about that smooth ass exit by Tenzin doooooeeee?!?!

He was basically sayin, “Mako, you need to stop playin and start living right…but that’s none of my business doe”

Afterwards, Korra and Asami hop in the coupe and go looking for the fugitive airbender. Let me just say, I completely fux with this team-up.

I feel like their conversation is the one Angeline Jolie and Jennifer Aniston need to have. They both come clean about their various stages of “overlap” and Korra doesn’t even get mad that Asami tried to Gabrielle Union here Dwyane Wade when she had amnesia. Korra let’s a spirit shadebend her in the middle of the street, but it gives her an idea…

…that only makes matters worse. She tried to give the spirit vines that harmony and they told her to get the fuck up outta their face with that hot bullshit.

After the vines destroy a couple of buildings and Korra saves some people, its back to square one. Korra is so frustrated it leads her to meditate on it, which is like Chris Brown being so upset he starts opening doors for women. Tenzin is the only person that is still happy about the Harmonic Convergence because its bringing air benders back into the world. They get the lead on where the fugitive air bender is and save him from falling off the Golden Gate (airbending might explain why that muthafucka sway so gotdamn much). The president wanna puff his chest out and expel Korra, but Korra puts on her, “you can’t fire me, I quit” face when she decides her mission as avatar is to rebuild the Air Nation with Tenzin…

…I’m guessing they aren’t recruiting our boy Zaheer who seems to be locked in the same prison they put Da Gawd Tai Lung in for Kung Fu Panda.

and you know where this is going…

How much of a badass do you have to be if they keep you locked up on top of a mountain pillar in the Himalayas and you don’t even have bending??? Well, guess what. Your boy got bending now. He also got some poetry for you unenlightened plebs. Fam, if a dude that’s locked up starts hitting you with the ancient sonnets of Guru Lahima, nothing good can come of it.

[styled_box title=”A Teaching Moment w/ William Evans” class=””]Quick Midwest vernacular lesson: When the Hawk is out, it means its so windy outside, your ass gotta walk like you’re auditioning for Smooth Criminal just to walk through it. When the Hawk is out, cats be huggin the sides of buildings downtown to avoid getting blown out into the middle of the gotdamn street. Aiight, lesson over.[/styled_box]

…as I was saying, I don’t know how long he’s had the Hawk in him, but dude is a master now. I don’t mean now, I mean, RIGHT NOW. He make short work of his prison guards before declaring the Order of the White Lotus just got put on Arya’s hit list and that the Avatar gonna get this work.

We start the second episode with Team Avatar deciding that they will recruit all of the air bender sightings between the Republic City and the Earth Kingdom Ba Sing Se. Asami shows up in the Riggid Air Ship that got saved from the terrorist bombing in Archer.

Along with Tenzin and Jinora, the squad starts hitting the spots thinking that these new airbenders will be in a hurry to abandon their lives and become monks with bald heads and pick up flying bison droppings when they’re not meditating. And nobody wants that? These privileged mofos man. But maybe its because as awesome as Tenzin is as a mentor and airbender, your boy would starve to death if he had to go door to door selling vacuum cleaners and shit. His monthly commission would be a case of kale and a couple of handfans they hand out in church with a scripture about living a possession-less life on them. The best had to be Ryu of course, who might be the first airbender that moved into Brooklyn because it’s safer now with more Walgreens. Korra tries to strong arm him (while Ryu’s mom tries to kick him out so she can turn his room into her home office and zen corner), but it doesn’t matter because Ryu literally doesn’t care about anything. Not even those same tactics that the army recruiters use in poor neighborhoods are working out for the crew at this point.

While Team Avatar stay failing, Zaheer out here with W-4s and open enrollment packets because he’s giving out that work to ayebody! He showed up to another prison that has one prisoner who is such a ridiculous earthbender (volcanic rock bender, Joe versus the Volcano bender) they have to keep him locked up on a boat in the middle of the ocean. Again, I know this ain’t Guantanamo, but I don’t think you can let super villains get their thug workout on like this, regardless if he can use his bending or not.

After he’s freed, Ghazan, or Rap Game Lava Kick Rocks, thanks Zaheer and is happy that they are getting the Hateocracy back together. I gotta say, I got high hopes for Zaheer. He might be our best villain (so far) since Azula stopped combing her hair.

As a last gasp effort before they make it to Ba Sing Se, Bolin falls back on his thespian training and decides it’s time to put on a show for the people as a recruiting tool. Tenzin takes off the shirt to show them what the vegan diet do and they amaze the simpletons for a minute.

One new airbender, this little delinquent bastard by the name of Kai tries to hit Team Avatar with the Bruce Wayne origin story, but he’s actually more like Jason Todd. He spinnin this tale while figuring out how much he could get for the propellers off airship.

When the authorities give them the real low down that Kai is just a straight up thief, they still take him in and we learn WAY TOO EARLY that Jinora got a thing for spirits and bad boys. Lawd.

She breaks out of her prison like it was made of tissue paper, b. Ming-Hua is grateful but says she’s surprised they haven’t gotten Zaheer’s “girlfriend” yet. Which is another way of saying, the baddest mofo of them all is still stuck locked up. Yeesh.

When the report is made that Ming-Hua has escaped, it’s made to muthafuckin Zuko!? Zuko, that redirect this lightening close to my heart and live to tell the tale dude!? Zuko, my strength is in my scar Gawd?! When he’s worried about some cats being on the loose, I think we need to believe him because Zuko DONE SEEN SOME THANGS IN HIS DAY. He knows where they are headed, so he does what all badass Fire Lords do and JUMPS ON HIS MUTHAFUCKIN DRAGON AND GETS THE FUCK UP OUT (yes, I’m a little excited to see Zuko back, deal with it).