After Kuvira decided that Romeo must die in the previous episode, we learn Team Avatar Extended is ok because as fate would have it, it was shoulders and back day for Bolin at the gym that day. Kuvira is straight up getting her Caesar on and marching on the capital. She might be moving a little quicker in that giant mech now, because after she fired the Megatron on her fiance, its obvious she got no fucks weighing her down whatsoever. There’s a small debate about whether they should all flee or stay (well, actually only Bolin wants to bounce), but Korra is channeling Avon Barksdale and ain’t letting this woman push her off the block anymore. 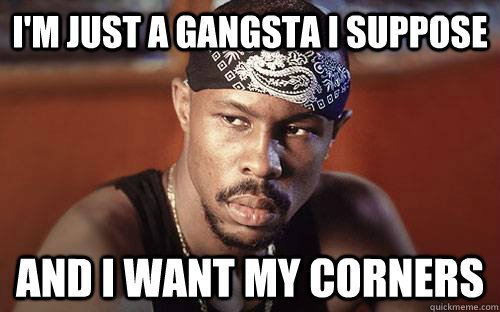 Also, and it’s been going on for a couple of episodes now, but y’all notice how Korra is the muthafuckin Boss now!?!? She giving out orders to every fuckin body and is not here for please, thank you or any of your gotdamn feedback. I’d nickname her Admiral Korra if “Avatar” wasn’t already the top of the food chain.

In the train station, cats out here panicking because the trains are down and they ain’t about that Occupy Republic City, shit. Prince Wu leaves to go get some undisclosed help while Pema lets him know that raising Meelo is the perfect training for keeping an angry mob from tearing shit up. After an inspired trip to the paint store from Meelo, Team Avatar Extended prepares to fight Kuvira and the mech.

(Ayo, get used to this. Every little thing that was either just a cool tidbit or annoying diversion during this season that didn’t have to deal with the main story comes back into play for the finale, including the fact that Meelo is a gotdamn Monet prodigy and knows how to fuck with some paint).

The airbenders get in that Air Force one formation, but Kuvira started the invasion a week early and therefore didn’t even get any Call of Duty time in this week. She out here feenin’ for a killstreak, fam.

Once the airbenders recover from the blast, Meelo goes EREN JAEGER UP IN THIS MUTHAFUCKA!

With the windshield all mucked up, the rest of the squad on the ground gets into action. Bolin gets his Mount Vesuvius on and disables one foot in lava while the Mighty Beifongs cable up the ankles. Then its straight up Chicago Weather on the Mech, trying to get it to fall.

Well, Kuvira equipped the mech with some dancer’s joints because it quickly regains its balance and then hit’s the fam with the death ray. Bodies hit the floor, b. Even Korra had to go Kratos on the building to keep from the freefall.

Korra sounds a full retreat back to Asami’s office, which looks a hell of a lot like Wayne Enterprises. Varrick is trying to tweak the Hummingbird Mechs without killing his former business partner and not so secret love at the same time. When they learn that Kuvira has a platoon of mechasuits headed for them, he’s got an idea on how to stop them…again, he’s done this before…this season.

Upstairs in the office, Baatar “I wouldn’t mind if you still called me Jr now” finally wakes up with Mama Suyin looking over him. He can’t believe that his fiance tried to Shanghi him like that. He asks Suyin how Kuvira could do that and Suyin answers back with something that rhymes with “Snitches ain’t Fit.”

Baatar, Jr laments that Wing, Wei and Opal will never forgive him and Suyin is like…yeah, they kind of hate your fucking guts. But this too shall pass once we decapitate your ex bae. So, you know, there are things to look forward to.

Zhu Li and Varrick are trying to put together the biggest magnetic pulse since Ocean’s 11 to take down the mechs when Varrick decides to tell his version of the 10 Cow Wife fable to Zhu Li (you’re welcome for your daily dose of misogyny that exists in the world as teaching anecdote, by the way). He also tells Zhu Li that he once grew up on a farm before running away with the carnival which just destroys all my Tony Stark theories I’ve been working up for two seasons now. The pulse works, but only takes out the mechs and not the God-Mech who is still walking around like giant Snoop Dog in Manhattan.

Baatar, Jr tells the crew that because the Mech is powered by spirit vine energy, the electromagnetic pulse didn’t work on it before telling everyone that it’s unstoppable. Everybody looking at him like, “This is what the fuck we get for keeping your ass alive?” But then Mr Sato himself, Dark Edison Da Gawd walks in with the “anything is possible” entrance. Lin went and got him from jail because they needed the brain power. So…uh…two things.

Then Hiroshi starts spittin them metaphors for how to take down the mech and we’re all reminded back that Daniel Dae Kim does the voice work. He couldn’t get the starring role as Superman in Man of Steel, so he out here bending the vocals for Legend of Korra. Probably worked out better for him to be honest.

Back at the train station, Prince Wu gets back just in time because the folks at the station looking like the Air Bender acolytes when Tenzin had them meditating on a mountain. I’d say they were fed up but these bastards can’t even stay awake enough to be fed up. And who did Prince Wu bring back with him?…yes, Badger Moles, same shit that Prince Wu been obsessed with since we first seen him this season when he was doing the “Single Ladies” dance before his coronation. He’s also getting his Black Messiah on, giving us the important song lyrics we need in these dark times. Team Avatar Red Team takes to the streets to slow down Kuvira while The Satos, Varrick and Zhu Li try to outfit the Hummingbirds with plasma cutters. In other words, its time for Da Gawd to get to work…

Korra be reaching Goku power levels without breaking a sweat. And the airbenders are fucking with Kuvira’s cannon and almost make her shoot her pinkie toe off like in Harlem Nights, which leads to this Meelo classic:

You can almost see Kuvira say, “Motherfucker!” under her breath.

So…y’all wanna talk about the Mighty Beifongs and Bolin bending a fucking building to drop the mech? Cuz we can. Yeah, lets talk about that shit.

AIN’T NOBODY FUCKIN’ WITH EARTHBENDERS MAN!!!

Yo, check it, I love all bending types indiscriminately. I am a bender, not a fighter. Even with airbenders returning and Zaheer getting his Captain Marvel on. And especially since the Fire Nation basically didn’t exist during Legend of Korra…Earthbenders ran the table on these past two seasons. If Legend of Korra was a spades game, Earthbenders got the big and little Jokers while everyone else got set like 6 episodes ago.

Speaking of the originals, Prince Wu got the badger moles digging an escape and singing about as well as those isolated vocals from Mariah Carey. Earth Empire soldiers try to take them all captive, but the badger moles make short work of those suits.

Back at Sato enterprises, they are putting the finishing touches on the Hummingbirds when Evil Edison and Asami Da Fictional Bae share a tinder moment of forgiveness and love. And right there, you knew Hiroshi wasn’t gonna see the credits rolling on this muthafucka. Don’t really hate that it had to be him. Zhu Li is about to get in the Hummingbird when Varrick stops her give out the proposal ALL OF US BENDERS should have given to our significant others.

The Hummingbirds come in, but can’t stay on the mech very long because Kuvira is allergic to mosquitoes and is really not trying to get stung and let that shit swell up on her. Avatar Korra, First of her name, protector of the realm, pulls the whole resevoir up and freezes Kuvira, giving the Satos time to cut into the suit. But that shit only last so long. And speaking of “So Long…”

Korra doesn’t even have time to worry about who is going to give Asami away at their wedding once the courts strike down the same sex marriage ban in Republic City (come on, how progressive does President Reiko strike you?). They have a slim opportunity of getting inside the mech and these God of War boss battles are not going to play themselves.