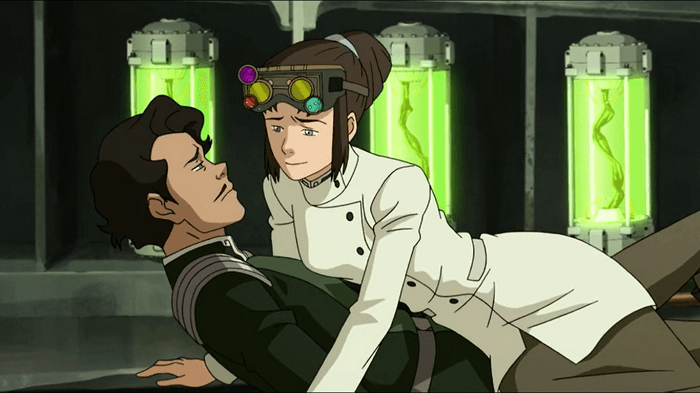 Bend your Iron Lung / where I’m from
Zafou son, ain’t nothin nice
(Been to many places, but I’m Earth Nation’s own)

Benders, this shit is serious. The Metal City is the last piece before Kuvira can put together that 500 pc. jigasaw puzzle like the “river creek through a forest” joint that your grandmother got on the living room table when you visit, which is why you can’t ever sit your food on the gotdamn table when you’re there, even during holidays. 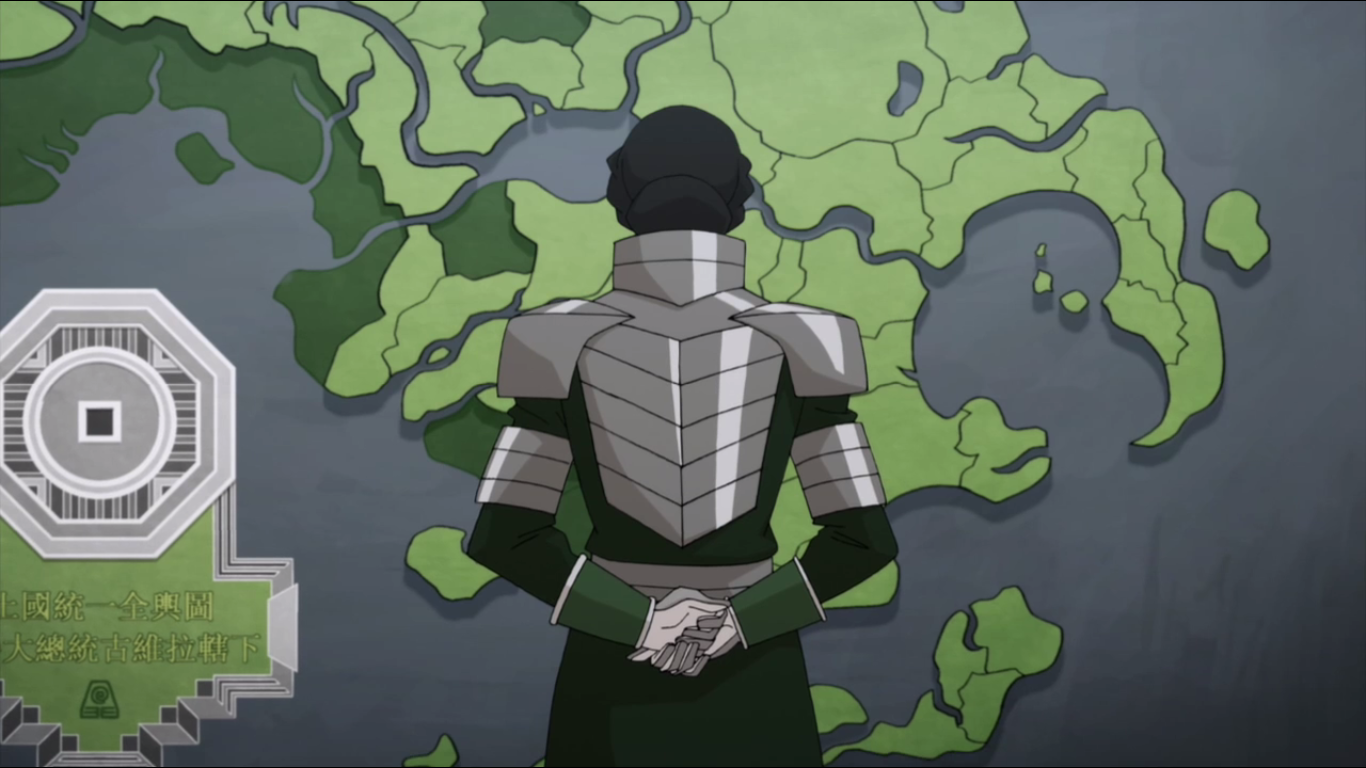 Kuvira on the train headed home, bumpin Kendrick’s ‘The Recipe’ 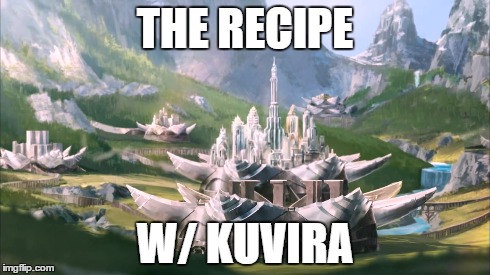 She brought the whole damn army just to “talk.” Which is like bringing a toothbrush and some fresh boxer briefs over your bae’s house just to stay up and watch a movie. Come on man. We all know you don’t work till 10 the next morning and you got your uniform laid out in the car. Kuvira, stop playin’.

Up above, The Flying Graysons are supposed to be taking Korra back to Republic City, but ever since Stella got that zinc up out of her and got her groove back, she like, naw, take me to where the hard shit goes down. Which sounds like she ready to rock out with her Avatar out, but she’s willing to give Kuvira a chance since she once saved her father. Meelo ain’t really about the soft negotiation shit doe. Back on the train, Varrick is working on his first prototype having similar results to his alter ego Tony Stark.

Besides the fact that we learned interesting shit like a unit of measurment for weight is a “Zhu Li” and what we simpletons call “volts” are actually called “Varricks” the shit is pretty much a disaster.


[divider type=”space_thin”]
Because of the explosion, Kuvira and Kuvira’s neutered pet come to make sure they weren’t attacked. Varrick then realizes that what he is actually doing might not be right. Your boy is having a existential moment. Zhu Li calls it a conscious, Varrick just thinks its a voice in his head that is ok with being poor. So yeah, one guess how Kuvira felt about him not wanting to continue the work…

You ever have to go on a school field trip where you had to wear a tie when you were like 10? And you hated every fucking minute of it? You’re at some theater or somethin because your broke ass school district got some money from Subway or some shit so they could plaster ads all over the school, but instead of taking that money and upgrading your sub at lunch to double meat, they thought y’all broke gods needed some culture. So now you up in a balcony of some suite that look like the shit Lincoln got brained at watching a play about some bad comedic love triangle, but all you care about is how uncomfortable that fucking tie is and how Ms. Holdsclaw keeps telling you to button your top button and straighten that shit out?

Yeah…that shit…well Kuvira is Ms. Holdsclaw when she’s tired of your shit…

And THEN stepped over you boy like Iverson dooooeeeeee???

Asami Da Fictional Bae kind of had the odd inclusion this episode, but yo, ain’t nobody in these vine flooded streets complaining about more quality time with Asami, fam. She visiting pops in jail and this dude has AGED. He look like he been president of the United States for both terms, my benders. Your boy went from “the evil keep my hair colored” to bearded Anderson Cooper in less than five years. Asami is there to return his letters unopened. But yo, Asami gotta be lonely, on the real. None of Team Avatar is there, her bae/best friend is still missing in action (as far as she knows), one parent in the dirt and one in jail lookin like broke Zeus.

The train is almost to Zaofu and Bolin just got welcomed into Kuvira’s inner circle. Kuvira wants him to help broker a peace with Suyin, even though those aren’t 300 dozen boxes of roses out there at the gates.

The Earth Empire Boarding Party finally walks up in the house that Suyin built like this about to be a civilized chat. Bolin is thrown off his game immediately because he didn’t expect Opal to be there too.

Shit is all bad yo. Kuvira and Suyin talkin that shit like they gotta 50/50 split from someone’s Last Will and Testament or some shit. Also, just as an FYI, any time someone says that they “set someone free” like Kuvira said about her lap dog, there’s a 96% chance that it actually means brainwashing, and the 4% is Morpheus and Neo in the Matrix ( also, I know Suyin’s son has a name but as they almost never say it on the show and he has no function outside of Kuvira’s command, this feels appropriate to just refer to him in different variations of Kuvira’s property). Bolin is also failing on all levels of diplomacy. Opal lets him know that after they leave, the citizens are forced into slave labor.

Back on the train, Kuvira gives Bolin the “Hard Truths” talk. When Bolin pushes back, Kuvira hits him with the, “Just so you’re aware, Opal is your side-piece now, your loyalty to me is where home is. And pick up some milk on your way.” She threatens to send your boy to a camp where they do shit other than teach a new trade.

AVATAR BACK in Zaofu and she’s getting the rundown from Suyin as to how things got so bad between her and Kuvira. Suyin is like, yo, she just hate me cause she ain’t me. When Korra asks what she can do to help, Suyin bends all the chill out of her body and start rappin that Rah Digga from “Party and Bullshit”…

And Korra’s official response is…

Back in Republic City, Asami Da Fiction Bae is going through it. She in the park alone, watching father daughter interactions and its breaking her heart. Which is unrealistic. Not because of the father/daughter love she’s witnessing, but because her fine self is out in public and didn’t get harassed once. So, #HollaBack on that bullshit because they edited all the Fire Benders out of this clip.

On the train, Bolin comes to see Varrick because they both realized they workin for Mussoluni 2K.

WELCOME TO THE PARTY BOLIN. You’re late, all the shrimp has been eaten and we only got Bud Lite left to drink, but at least you showed up before the DJ hit us with the slow jams.

After the Korra met with Kuvira and got the “You Shall Not Pass,” Kuvira’s marmot is searching for Bolin and realizes that both him and Varrick (and Zhu Li) are missing. So now them cats are fugitives and enemies of the Earth Empire. The Fugitive three are arguing about where to go next when Bolin gets hit with that hot shit to the armor.


[divider type=”space_thin”]
Can we talk about how Zhu Li got LOOSE in this fight. I imagine that this looks a lot like Zhu Li when she goes to the club minus the mech suit.

And while his diplomatic skills are shit, you KNOW it was Bolin time up in here.

But of course, Varrick’s fragile ass gets caught, so that was all she wrote on that shit. Once they’re captured, Kuvira out here playing grade school English teacher and handing out ALL the sentences. Varrick gonna be forced to stay and work on Nazi technology, while Bolin and Zhu Li get sent to re-education camps…Until Zhu Li gets all the way fed up.

She threw Varrick so far under the bus, he gonna be picking asphalt out of his Earth Empire uniform for weeks. All capped off of course by Zhu Li telling someone else to “do the thing!”

Korra tries to get back to talk to Suyin and negotiate peace but Suyin took both her sons on a suicide mission to merk Kuvira in her camp, Solid Snake style. I love Suyin, but at some point we’re gonna have to circle back and look at her parenting style. Something tells me there might be some opportunities for improvement there.