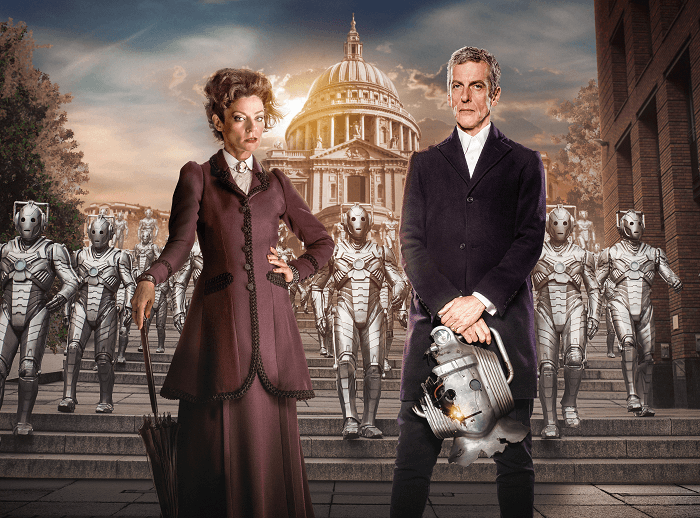 Wow. What a way to start off the season eight finale. I do think we deserved a smart, action-packed episode this week after last week’s boring dud, and boy, did Steven Moffat deliver.

There’s a lot to get into, so let’s just start off at the beginning. “Dark Water” immediately digs right into some heavy sorrow with Danny Pink’s death. Seriously? Dude gets killed just as Clara is making her ridiculously emotional declaration of love? Cue all of the feels—and we’re not even 15 minutes into the episode. We already know that this isn’t the end of Danny, and we know that this is the route we’re going to take into the Nethersphere, where we’ve been heading all along. But it’s still a daring choice to make because we get hit with this (although not as hard as Danny is hit … too soon?) before we even get a chance to settle into the episode. It’s also tough because we know Clara’s been having a rough time this season, what with saving the world and battling aliens and balancing her lives with the Doctor and Danny, and she chooses that moment to really express to Danny what he means to her and come clean about everything. Oh irony, thy name is Moffat.

Jena Coleman gets to show off her acting skills yet again (though to be fair, she’s had to do a lot of that lately, with this being such a Clara-focused season) as we see Clara suffer through her grief in a way that isn’t overly maudlin—which wouldn’t have worked for the show or for Clara, by the way—but in a way that is, honestly, a little unhinged. Clara goes almost mad with her grief, and is even driven to manipulate the Doctor into changing time to bring Danny back. Sure, this reminded me of Rose’s request to the ninth Doctor for him to bring her father back, and all of the mess that caused, but only momentarily, because Clara’s turn in this episode was far darker than Rose’s teary-eyed attempt at her father’s salvation. I love seeing a character’s limits, and Clara is an interesting case study because we already got a season of her with the last Doctor. We’ve already seen her at her most clever, her most chipper and her most brave. In fact, she spent a good part of the last season running around and being cute, which, of course, worked for her at the time and definitely worked in terms of her interactions with the eleventh Doctor. But she’s had to grow up in this season, and we’ve seen her pushed close to her limits in multiple respects: when she has to decide on the fate of humanity in “Kill the Moon,” and when she has to become the Doctor in “Flatline.” In the former, she had that tense altercation with the Doctor during which she decides that she no longer wants to travel with him (but jk! Of course she returns), and in the latter, she is pushed to the limits in terms of her character, and in order to survive and save the day, she must become the Doctor. Now we see her serious enough to basically roofie the Doctor, hijack the Tardis and threaten him with both of their well-being at stake. That’s pretty hardcore, Clara.

The volcano standoff was quite the scene, one of the most tense and riveting scenes this season, and Coleman hits just the right notes. I appreciate the fact that Moffat commits to this emotional and mental breakdown on Clara’s part; even after she finds out that the exchange was just an illusion, she says she would do it again. And the Doctor’s response to Clara’s betrayal definitely warranted an “Aww” moment: “Do you think I care for you so little that betraying me would make a difference?” It looks like the twelfth Doctor has a heart after all. Of course, he also betrayed her and has been a dick many times this season for no real reason, so he can’t really hold Clara’s grief-caused mania against her—but we’ll just leave that alone for now.

I’m just going to take a minute to point out a few other good quotes before the team takes their field trip to the underworld:

The Doctor, on Clara’s sad doe eyes: “How do you do that? It’s like they inflate!”

Clara, after learning the Doctor is going to help her bring Danny back: “I don’t deserve a friend like you.”
Doctor: “Clara, I’m terribly sorry, but I’m exactly what you deserve.”

OK, back to the episode. Danny really has a rough time in this episode. He gets hit by a car, dies, has to fill in a bunch of really depressing paperwork, is separated from Clara and is made to face his PTSD with the child he accidentally killed when he was a soldier. You can’t help but feel bad for him, and Samuel Anderson does a good job with his acting in this episode as well. I really enjoyed the presentation of the Nethersphere, especially the customer service rep that Danny spoke to throughout the episode. The professionalism and inappropriate cheeriness despite the situation just made it feel a lot like a Progressive car insurance ad—I was waiting for Flo to pop out and hand Danny a “choose your rates” tool. The aesthetics of the Nethersphere—the outside, that endless, futuristic metropolis that Danny sees when he steps out on the balcony of the office—juxtaposed with the blank, lifeless interior of the office was pretty impressive. I’m also glad that the iPad thing was brought up—because apparently the Nethersphere has Apple products—a point I brought up two episodes ago. It’s bizarre to see everyone using iPads, but the explanation was short and clever enough to appease me: “We have Steve Jobs.” I’ll take it.

Moffat really went for the darkness in this episode with 3W. We’ve already had a death in the episode and there are corpses everywhere, but we just have to take it to a whole new level with the explanation for what happens in the afterlife—the 3W, the three words: “Don’t cremate me.” Dear god. Really, Moffat? I’m about to go run and get my will in order right now. It’s a really gruesome and depressing thought, that humans are still aware of what happens to them after death. This episode is enough to stop anyone from becoming an organ donor. But the way this revelation, and the x-ray dark water, sets up for the arrival of the Cybermen is pretty brilliant. I was skeptical when I saw Cybermen in the trailer for the finale, because Moffat has a bad habit of throwing in a bunch of the Doctor’s main antagonists together with no rhyme or reason, making things unnecessarily complicated (aka “The Christopher Nolan Method”). And sometimes it just ends up being expected. But I really didn’t see this coming.

Speaking of things I didn’t see coming: Missy’s the Master! OK, so the Interwebs had come up with that as a theory before the big reveal this week, but I was doubtful because of Moffat’s oh-so-characteristic douchebaggery regarding whether the Doctor will ever regenerate as a woman. We knew that Time Lords could change genders (and races, if you recall Mels, an incarnation of River Song, who was ::gasp:: black), but we were just supposed to take it on good faith because we hadn’t seen it. I’m really surprised, knowing Moffat’s misogynistic tendencies, that he would even allow for the Master to do a gender swap—while wearing a very quirky Mary Poppins hat, I may add. But I suppose allowing for different gender representation in antagonists does not signal his allowance of different gender representation of the lead protagonist. That would just be getting out of hand, wouldn’t it, Moffat?

Anyway, Michelle Gomez aptly captures the insanity and cleverness of the Master. And the fact that she, as the Master, called the Doctor her boyfriend and made out with him as quite a dramatic greeting was surely enough to launch a million fanfics. My gut reaction is to be excited at the return of the Master, but I don’t have enough information at this point to really commit. There are a lot of unanswered questions. For example, how did the Master get back? Wasn’t he trapped in the Time War with the rest of Gallifrey? As much as I love the Master, Moffat can’t just keep breaking his own rules and revisit Gallifrey whenever he wishes. Hopefully, there’ll be a good explanation for that. Plus, we still haven’t figured out just exactly what the deal is with the Nethersphere and what’s going to happen to Danny.

Other great quotes in this episode:
Dr. Chang (who is apparently a big ‘ole pervy freak): “I keep saying they should use [dark water] in swimming pools.” … Come again, sir?
Clara, to the Doctor: “Speak for me again, and I’ll detach something.”
Doctor, to Dr. Chang, as he waits for his explanation of 3W: “Can you just hurry up please, or I’ll hit you with my shoe.”

So far, I’m very happy with the season eight finale. This first half was daring in its coverage of grief and challenging in its subject material in general. Plus, we’ve got classic “Doctor Who” villains in the form of the Master and the Cybermen. The build-up to this finale has been pretty weak, but at least it looks like we’re going out with a bang. I’ve got to be a little skeptical because we’ve still got plenty to wrap up, but either way, I hope we’re getting a strong end to the season. Make sure to check back in next week for my final review, of the last episode of season eight, “Death in Heaven.”