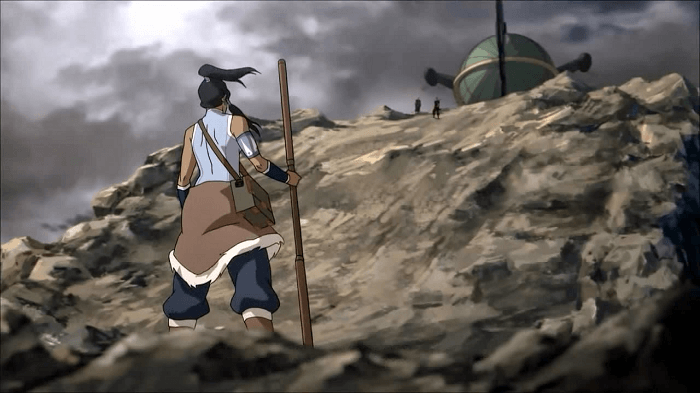 Yo, Nickelodeon, ain’t about shit, fam. They just emotional terrorist, b. I thought a brotha had two weeks to prepare for the finale. Two weeks to give my emotions their marching orders to obey them fuckin selves. Naw man, Nick.com dropped the final two episodes at the same damn time. At like noon eastern standard time no less. It’s too much yo, it’s too much. I barely survived this shit myself. Nickelodeon don’t care about us man. They like the Guilty Remnant, smoking cigarettes and watching us go through it from afar.

Back into this episode, we start at the beginning of the apocalypse. Airbenders captured, Tenzin’s fate unknown and Zaheer planting his flag on top of the Northern Air Temple

Team Avatar plus Metal City’s finest are heading for the showdown. All salute the great strategist, the general, Suyin, with some new armor she picked up at the Zaofu Mall. Also, man, thank the Goddess (shouts Liara T’soni on the hook), that Bolin is here trying to ease the tension because this episode was dark. Cats lost their hope in the same fog that Zaheer through Aiwei into. Korra hits Zaheer on the hip to set up the meet and exchange. Zaheer pick up the phone, waiting by window like some early 90’s R&B video. I half expected Zaheer to start singing his dialogue and shit on some “Korra, you might be young, but your’re ready” mess. He sets up the meet, but Team Avatar ain’t really about that get down or lay down life. The Republic City Heartbreakers (Asami, Bolin and Mako) go to the temple to rescue the airbenders while the Loyal Beifongs and Tonraq scale the mountain to ambush the AOD when Korra surrenders.

Meanwhile, Zaheer up in the temple practicing his Guru Laghima in preparation for the poetry slam later that night. Admit it, Zaheer look like he would walk up in the venue and pull straight 9s on the judge’s scorecards. Like he wouldn’t fit in. Spittin about anarchy, and no more masters, sheeeyet, Zaheer probably make Upworthy on his first try.


[divider type=”space_thin”]
P’Li walks up into the temple. My bad, P’Li bends down just to fit through the doorway of the temple to share this last (they don’t know it yet) moments with her boo. We find out that Zaheer saved her from being a child soldier in Uganda some years back. I guess all those white college kids that were on that Kony 2012 shit helped Zaheer go behind enemy lines.

Pat yourselves on the back activist. Now about this Ferguson “thing”…

Before Korra goes up the mountain, Team Avatar hugs it out, including when Korra gives Mako that “your body was calling me” grip. The Republic City Heartbreakers make it to the Air Temple where Ghazan come out the temple looking like he just got his hair pressed, talkin about the airbenders are inside. Korra glides to the top of the mountain and confronts Zaheer and P’Li at the meet. Where does Zaheer get off man? He talkin to Korra on some daddy shit, talkin about don’t make me come over there. Korra drops the air glider and lets P’Li put the Jacob the Jeweler bracelets on her. Back in the Air Temple, the Republic City Heartbreakers see that Tenzin alive, barely. He look like he spent a weekend with Ray Rice in Atlantic City. Or Floyd Mayweather. Or Hope Solo. Or Chad Ochocinco. Or Tonya Harding. Or William Koch. Or Chris Brown Or…fa real, I could do this all day…

Tenzin the only airbender up in here though, cuz all the other airbender hostages are actually just water puppets that Ming-Hua has set up. Like 18 of them b. Ming-Hua used the whole Hudson River to make fake airbender hostages. Ain’t nobody fuckin with the Young and the Armless, fam. It’s an ambush, but its almost too late on the mountain top cuz Korra doing that perp walk to the airship already. The Loyal Beifongs get the call and attack Zaheer and P’Li. Meanwhile, I’m sorry man, if you have made it this far and you still got shit to bitch about when it comes to Korra, then kill ya self b. You like the cat that still be catcalling women with a flip phone up to his ear. Kill ya self. Korra out here doing THE MOST. She rockin the Django before he was unchained attire and still giving Zaheer that trouble. Y’ALL RED LOTUS MUTHAFUCKAS DON’T WANT NO TROUBLE!!!

Yo, but when the Beifongs come up over that mountain side with the cables lookin like the Scout Legion beyond the wall dooooooeeee. This is not a game people.

P’Li goes to deal with the Beifongs while Zaheer finally wears the shackled Korra down enough to lead her to the airship. But then Tonraq come through in the clutch, trying to redeem himself for getting smashed every other time we’ve seen him in battle. He cut that airship loose and Korra and Tonraq rock the best Father / Daughter combo since Ra’s al Ghul put Talia’s first sword in her hand.

Back in the air temple, Ghazan on some “I’ll burn everything you love” type shit as he Pompeii’s the whole temple, trying to bury the Republic City Heartbreakers plus Tenzin. Bolin keep clearing paths for them deeper into the temple, but you know…Lava. They finally reach a cliff edge where Bolin got no choice but to step up and bend that lava back, like he had that shit on rewind. Take your punkass lava back Ghazan, we all full over here.

This dude Kai show up with the baby bison like he couldn’t have pulled up half an hour ago before the temple got turned to ash.

On the mountain, the bending too real people. The bending too fierce. Korra got zero limbs free, but still got 4 elements for that ass. They set up Zaheer perfectly, but Tonraq goes for that killshot too late.

Zaheer lift’s him up and then tells him to respect the shooter before pushing him off the cliff. Eventually, he wears down Korra again, but most of that is secondary.

The way she bends the bullet like Jolie in Wanted. We didn’t get a whole lot of speaking parts from you P’Li, but you were fine as baby hair and nobody but you, Storm and probably Janelle Monae could rock the Mohawk braid. I dug P’Li…I really did…but I probably dig Suyin even more. While Lin was causing a distraction, Suyin decided she was over dressed for the occasion, and bent her own armor around P’Li’s head right as she was lickin a shot.

Dude…We got no visual and no sound. Cuz that shit is BRUTAL. I mean, we threw Aiwei in the mist of lost souls. Aiight. Took the air out of the Earth Queen’s lungs. Bet. But bruh, P’Li’s head…it ain’t there no more. They gave her the Mars Attacks treatment fam. Rest in peace P’Li. All six feet seven inches of her.

Zaheer felt that shit in his bones man. He knew she had went Sleepy Hollow the second it happened.

The Beifongs finally make it to Zaheer, but this dude got an unconscious Korra on the cliff edge. Then he remembers he signed up for the Cover Poetry Slam and start spittin that Guru Laghima again…before he stepped off the cliff…cuz he only the second cat to be able to fly. Tell me those bars ain’t about be the new anthem for cats in the hood with commitment issues. Wanna leave your job, drop out of school? Guru Laghima got you. That relationship that’s going nowhere: Baby, I know we’ve been together for 3 years. But I need to let go of my earthly tether. And enter the void.

Cats gonna be entering the void to get out of child support, group projects in school and helping their boys move into their new apartment. It’s about to be rough in these streets. Basically, this might be the same shit that Tenzin told Lin back in the day because she probably had the same expression when Zaheer started flying like, did this muthafucka just…

Yes Lin. Yes he did. This dude flying. Zaheer with the cheat code, bruh. He got unlimited ammo and weapons in GTA V right now.

That’s where we leave it, everybody is ok for Team Avatar, P’Li still perfect but only from the shoulders down, and Zaheer doesn’t need a ride, cuz he doin the Superman thing.

Setting up the best muthafuckin finale in the game, my peoples…