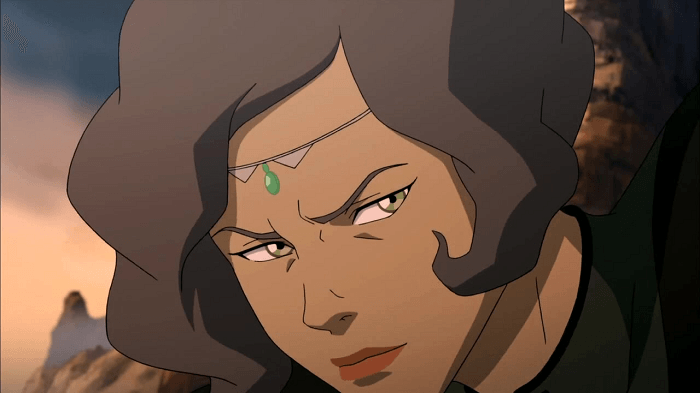 Yes. Top 5. Yes, I know what the fuck universe we referring to, but Suyin “You can put a ring on it, but you still taking my last name” Beifong is one of the best to ever do it. I don’t care, I don’t care, I don’t metal bending care. First off, she’s a daughter of the best bender in all of bender-dom (but I’m gonna have mercy on y’all not hit you with that THAT Top 5 today). Second, she’s the matriarch of the most advanced city in the world. Third, she do all this shit with some flawless hair that only moves when she wants it to. Wife, mother, world leader, world saver, dance instructor, and bending teacher? In my Alonzo Hightower voice, “Y’all gonna get an education today!” Suyin is a lot of things fam, but being full of shit ain’t one of them. Yeah, she is a caring and devoted mom, but she ain’t scared to give somebody that real rap raw. Of course, you know I’m talking about the time her sister Lin tried to come collect her fade and Suyin gave her all the receipts with, “No wonder Tenzin ended things with you years ago.” Gotdamn Lin, ‘now why you wanna go and do that love, huh.

Of course, she capped that off by fighting her sister and giving her some of that FMLA before her daughter had to break it up. Suyin slings no fucks about as well as she slings that metal, yo.

2) “She showed me how to shoot for the stars until I put a hole in the sky.” You know how people be like, so-and-so births nations. Yo, Suyin really out here birthin’ the Big Bang, fam. Su got 5 kids and no regrets in these metal city streets. Her oldest is an engineering genius (though he’s got terrible taste in women), she bended a couple of twins that created their own sport, a metal-bending artist, and her youngest is a new Airbender with Asami-aesthetic aspirations.

Not only did Su get a good spouse with the job and the benefits, she made dude take her last name and soak up about 30 seconds of screen time in the background of her story. Patriarchy stay getting bent into the earth, yo.

Lin Beifong was the oldest daughter of Toph, followed in her footsteps and wanted to preserve her legacy. So it’s some cruel shit that Lin ended up being the miserable and lonely Sheriff of Nottingham while her younger sister ended up creating the greatest city there ever was and ever will be, apologies to Qarth.

Su had to flee Republic City because she was an accomplice to a heist, ruined her mother’s career in the process, joined the circus, then yada yada yada, became fuckin’ Cleopatra. Except in her version, she made Mark Antony obey. If that ain’t the Earth Nation Dream, I don’t know what is. Ain’t nobody got the god flow like Suyin. Even though there are tons of high-powered benders in Legend of Korra, not many have a distinct visual style. Su might be one of the best earth benders out here wreckin’ shop, but she moves like a water bender, not the wide-based and cement movement style of the common folk. Bolin can bend fuckin’ lava and he ain’t as smooth as Suyin, fam. Suyin bends like a ’92 Chateau served slightly chilled. That shit be massaging your throat on the way down.

I’m sure folks remember that Kuvira got the best of Suyin in one of the illest battles ever, but let’s not forget that Suyin giving Kuvira ALL the bendin’ and some leftovers for most of that fight, despite the fact she’s over 20 years older than her. Plus, no metal bender got situational awareness like Suyin. She be using her surroundings like First Person Shooters that put exploding barrels all over the damn place.

Suyin’s bio: Founder. Mother. Wife. Loving sister. Dance instructor. Bending mentor. Straight up killer. Fuck the soft shit fam, when the deed needs done, Su is down to do the damn deed. When shit got tense at the end of season 3 and she saw her sister about to catch that solar flare from P’Li, Suyin decided to put a body on her body armor, by bending that shit around P’Li’s heat lamp. Warranty expired, no returns on that shit.

Let’s not forget that Suyin got captured in season 4 because she took her twin sons on a Black Ops mission to give Kuvira the John Wilkes Booth in her bed. While everyone out here trying to be fucking decent and bring folks to justice, Suyin probably gotta apply extra makeup over all her tatted tears at PTO functions and dance recitals. She. ‘Bout. That. Murda. Muzik.

Check out more of our Top 5 Dead or Alive drops.