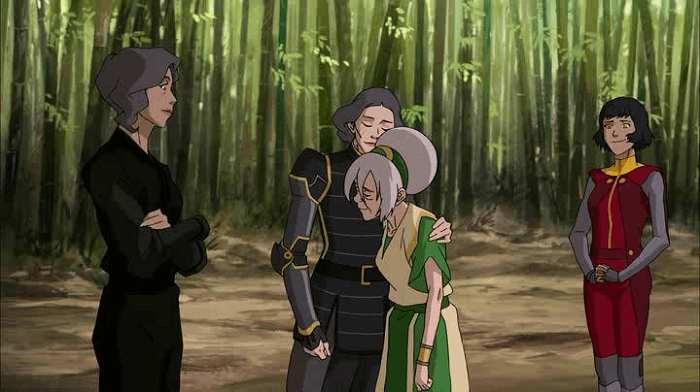 Now you know when you saw the title of this episode that the shit was going down like stock for companies that make body cameras after the Eric Garner grand jury decision. Lin the Elder, Opal aka Young Sky and Bolin aka “I never had an internal thought I wasn’t compelled to say out loud,” arrive near Zaofu on the rescue mission. The forest lookin like Haliburton got the land rights last week. As they are accessing where the prisoners might be, Da Gawd Beifong, La Original come walking out from the forest like this is their Friday meet-up spot or some shit. (Yes, I know “original” is actually a masculine noun in Spanish, but since Toph is a woman, I modified it. I am the translator and you gotta deal with it). Gotta love the greetings here too:

Together they put together some possibilities of where the rest of the Beifongs are being held captive. A couple of notes from this first scene:

Back in Republic City, Varrick and Asami present their first prototype of the Iron Man power suit, but George W. wants a super weapon like Kuvira. I’d say it was because of penis envy but that opens up all kinds of doors we ain’t got time to walk through today. Varrick refuses to duplicate that weapon and when President Reiko asks Korra to harvest the vines, she’s like, “Yo, Black Twitter just took me back and you want me to drop some Charles Barkley and Don Lemon quotes? Naaahhhhh, b.” Prince Wu steps in to suggest that they should evacuate the citizens of Republic City and everyone takes note that Prince Wu has an idea that doesn’t use the words “crown” or “badger mole.” Of course, Prince Wu admits that while he’s serious about his idea, he’s also trying to impress Korra. Mako is like:

Back in Zaofu, the Earth Empire is out here trying to test their Death Star, but keep running into…complications. Mainly, Zhu Li keeps trying to blow the muthafucka up. Baatar (still Jr.) sees some sabotage to the weapon but thinks its just sloppiness and not subterfuge. With the kind of pressure he’s under, it makes you wonder just how scared of Kuvira he is too. I mean, there are things I won’t do in my house because my wife ain’t above cutting a brotha just to prove a point, but normal arguments with Kuvira gotta be THE WORST. How many times you think Baatar got his zipper bended up a little too quickly because Kuvira heard him talkin shit under his breath?

The Beifongs and Opal’s plus one get into the factory and use that sonar to find where the prisoners are (LOVE THAT SONAR fam. I think we’ve established that it’s a Beifong character class exclusive when you play the Korra RPG that Black Nerd Problems is currently developing).

Kuvira drop by for that surprise inspection (of course she does) and gently threatens Zhu Li since she’s been working on this project from jump. We learn that still, nobody is fuckin’ with Toph because she got that truth serum ability too and can tell that Zhu Li is lying about trying to fix the weapon.

After they put together a rescue plan and camp out for the night, Toph opens the conversation by asking Bolin why he suffers from erectile dysfunction since he can’t metalbend. But that was the least offensive shit said around the campfire. Lin is completely fed up with Toph’s cavalier response to everything, just shadebending ma dukes every chance she gets. But then Bolin “I left my filter in my Earth Empire uniform” asks what the streets been waiting on since we were introduced to Suyin and learned that Toph is all about that women’s liberation. The streets been checking in with Human Resources, checking child support deductions and seeing who claiming dependents on their W-4 since “The Metal Clan” episode. Finally he asks, who Lin’s father is. 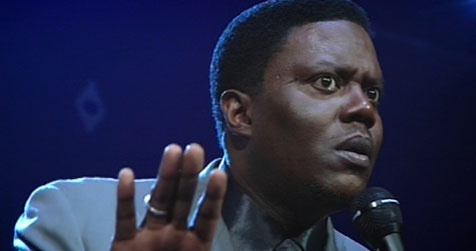 “He was a guy named Kanto.” Toph might as well have been like, “this dude that cashed my bet during the pro bending championships in ’72 that told me he liked my bangs.” Toph was untethered before that shit was fashionable. Toph be looking at Zaheer like, “I’ve been spittin’ that Guru Laghima since before you were born, son.” Well, Toph not seeming to care much is what sets Lin off as she been holding on to this shit for over 20 years. Lin is about as mad as we’ve seen her and for someone that stays on Defcon 2, that’s not an easy accomplishment. She gets so mad at Toph her scar start pulsing and shit.

It’s Final Exams the next day and while Kuvira is wheeling out the Death Star, #DemEarthBenders get on their Ocean’s 11 shit to save Suyin and the family. The plan is for Lin to swing each prisoner from the prison suspended over the canyon over to Bolin in the canyon wall. The whole scene looks great, but I imagine that this is how Dick Grayson became an orphan. 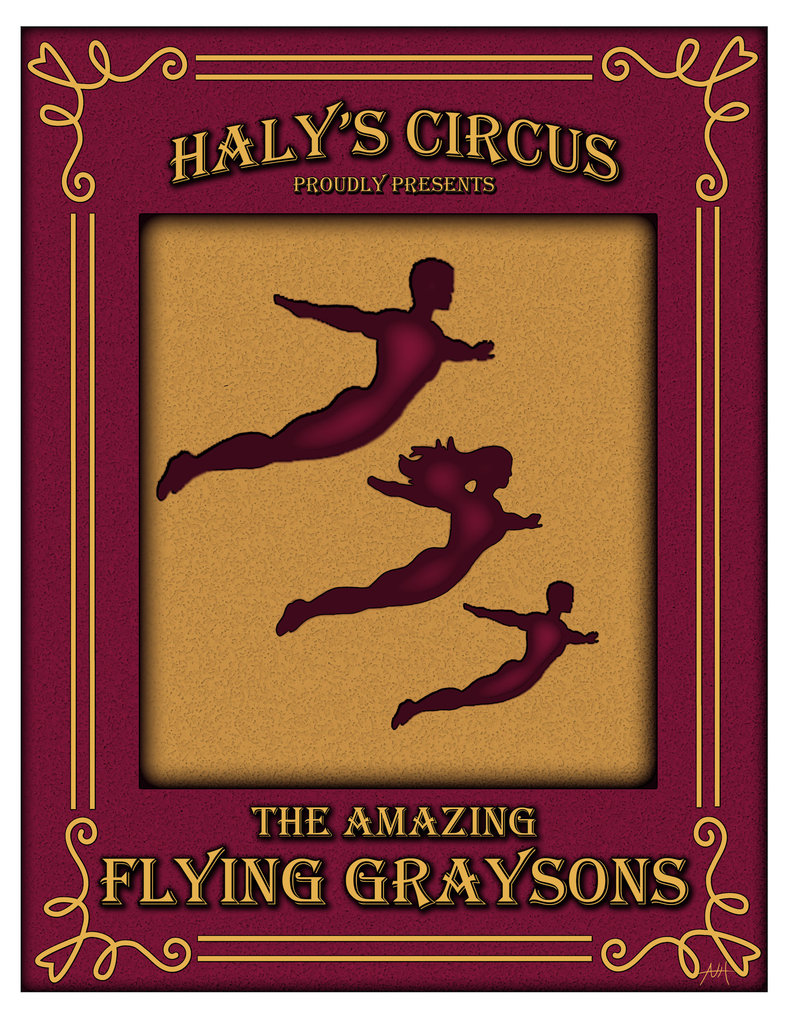 Above ground, it’s time to buy low in fascism because Kuvira got the people cheering for this nuke testing. Of course, the test is messed up, again and Baatar Jr. finds the disrupter pin is gone. Kuvira is fed up and presses Zhu Li on it before finding the pin on Zhu Li’s person.

Kuvira sends Zhu Li to the test town to see Death by Spirit Vine up close…which sounds terrible, but is still slightly more hopeful considering I thought Kuvira was about to take that disrupter pin and “Move the coin” on Zhu Li.

Baatar Sr. need to get some credibility back, fam. He curled up in the fetal position like those bigots that say racist shit on social media and then some Black Folk meet them in the parking lot of their job. Because Baatar Sr. came down with a sudden case of no-chill during the prison break, the guards are alerted and the Beifongs barely escape when the mechs rush in.

Once everyone is united, Opal lets them know Zhu Li is about to get the Alderaan treatment and Bolin can’t just walk away from that. Toph is firmly like, naw, fuck that, but her children both know they gotta do something about Kuvira’s death ray and give Opal and Bolin some cover. And also, Baatar Sr. calls Toph, “mom” but Toph ain’t feelin’ that shit.

***We interrupt this prison break and upcoming battle we’ve all been waiting to see, to show you Korra getting shitted on by spirits.***

Seriously, the spirit world is really #BlackTwitter, yo. It’s hard to define. Everybody knows where it is, but aren’t always sure how to find it. And it’s brutally honest with no chill to be had and no fucks to be given. Korra up in there asking for help, but they lookin at her like they remember those tweets when she called Beyonce more capitalist then feminist and they are not impressed. They tell our girl to go pump some sand before abandoning her. Back to the gangsta shit, Baatar Jr. is about to fire the weapon into the test town before he sees Opal and Bolin trying to save Zhu Li. Baatar Jr. remembers that he has some semblance of a soul and doesn’t want to vaporize his own sister, but it’s too late because the ray is firing already.

On the ground, the Beifongs give the weapon that fault line treatment and throw the cannon off target, which basically PUTS A HOLE IN THE UNIVERSE, but misses our folks. Meanwhile, two generations of Beifong on the ground giving out that holiday pay at time in a half to these Earth Empire cats. But naw, that ain’t what you came here for…THIS is what you came here for:

Yo, I know I rock the hyperbole like none other, but I don’t know if I could exaggerate enough how great if not ridiculously short this one-on-one battle between Suyin and Kuvira was. Just for record keeping purposes, in about a 15 second sequence, Suyin bended a metal panel off the weapon, spun that shit like a pinwheel to block Kuvira’s attacks, backed into that same metal panel to give herself some armor, used the metal under her feet to spring her over Kuvira’s head, then bended the railing off of the weapon to use as the Donatello Bo staff…I mean, WHAT ARE WE TALKIN ABOUT HERE? In a related story, did you know that Wikipedia says that Suyin is 48 years old? Life goals, b. It was way too short, but this battle was top five Legend of Korra fights yo. Seriously.

The Beifongs eventually find themselves cornered until Toph comes in and gives them cats the 7.2 on the Richter Scale so they can swoop in and save everyone. She tells Kuvira that her Metal on Metal crime argument be fucking up the real movement, but unlike Facebook, Kuvira just gotta take that shit because the Gawd is speaking.


[divider type=”space_thin”]
Because I did enjoy this episode a lot, I ain’t gonna talk about why the Beifongs didn’t take out that weapon then and there or why they ran from a fight when they got three generations of Beifong in one place and probably got four of the five best earthbenders currently living on the same side. After everyone departs, Zhu Li tells them Kuvira’s “secret” plan to attack Republic City, even though everybody knows this already as it was alluded to no less than 3 times during the episode. And we supposed to be acting like:

We didn’t get the fight we wanted out of this episode (Toph versus the world) but we got the fight we deserved (Kuvira versus Suyin). All 40 seconds of it. Here’s to hoping we get some more from the “want” column next week.