And we’re back with another season of one of the wildest rides on television. Chapter 9 of Legion, like the rest Noah Hawley’s hybrid genre-f*** of a show, is a trip. The show is effective at weaving science fiction, adventure, creepy atmosphere, and mystery all together in a way that feels distinctive and sincere — something many shows can’t accomplish.

“Chapter 9” opens with Lenny (Aubrey Plaza) aka Amahl Farouk aka The Shadow King sitting on a vivid yellow raft alongside Oliver Bird (Jemaine Clement). The Shadow King is attached to Oliver and they are sitting in a pool, in complimentary swimwear. They talk about time and what day it is, which prompts Lenny to start laughing. “Is something funny?” Oliver asks. Lenny responds, “We’re trapped.” She begins to laugh, perhaps manically, and Oliver joins in the laughter, perhaps sad. The camera zooms out and the two appear to be inside someone’s eye, then inside another someone’s eye who is Oliver again sitting at what appears to be a nightclub table. And the scene cuts away.

It’s a strange opening but one that is fitting for Legion. Like The Shadow King and Oliver, the other characters are trapped in a new situation. We, the audience, are trapped too, whisked along a complex timeline and through questionable realities, unsure of what will unfold.

We left Season 1 with David Haller captured in a mysterious metallic orb. Remember, David is the most powerful mutant their world has ever seen. He was once diagnosed with schizophrenia, then found out his delusions were in fact, real, a parasite — the Shadow King — who burrowed into his subconscious. For one of the weirdest shows on a television, David in a metal orb somehow felt strange and out-of-place. I wasn’t sure what this would mean for the show moving forward.

But the second season of Legion gives us a soft reset, which in a show so dense with action, is helpful. David has reappeared and is whisked into a lab and resuscitated. In a surprise turn, only one day has passed for David in The Orb™, but “about a year” (362 days to be exact, as Sydney tells him) has passed for everyone else. There’s now been a change in location. No longer in the safe haven for mutants that was Summerland, Melanie Bird and Co. have adjusted to a new life without David. They are now working for/at Division 3 headquarters. Cary, Kerry, Ptonomy, and Sydney are all using their respective powers to help Division 3 “fight [their] real enemies,” having convinced the organization that most mutants want to live in peace.

The familiar face at Division 3 is Clark, the interrogator from last season who got burned in “Chapter 1,” during David’s escape. The unfamiliar face is the “boss,” Admiral Fukiyama. Admiral Fukiyama is not just “a guy with a basket on his head,” as David points out. Fukiyama comes with a handful of Vermillion who seem to speak his thoughts for him. David cannot read the admiral’s thoughts like he can the others, which feels like it will be important later. If it seems like a lot to hold onto, I think it is. But it somehow works because all of this is new to David. The episode simultaneously puts us right after the action of that Season 1 finale, in David’s eyes, but so much has changed without him. “Chapter 9” catches us up, as it catches David up. It’s hypnotic, it’s confusing, it’s destabilizing. Everything that makes the show fun to watch (even if a little frustrating).

(Almost) A Year Is A Long Time

David’s introduction to what he has missed begins with Sydney, who as his girlfriend, is rightfully confused and upset — though she remains cool and collected. “Huh…you look the same,” she tells David. Sydney’s comportment seems a bit different than we last saw her, her hair a little longer, her expression a bit weathered. “You left me,” he hears her think. It turns out she’s upset and worried it will happen again. She feels she has changed a bit telling David “I like cherry pie now,” implying that they might not know each other like they once did. What does it mean that each of these characters besides David has had an entire year of growth? How will that affect their dynamics moving forward? These are interesting questions that I’m excited to see play out.

The various characters catch David up on what he’s missed. Sydney explains to David “the catalyst” which has distracted the team from their first priority of finding The Shadow King. “The catalyst” is an occurrence that turns humans into frozen, teeth-chattering shells of themselves, whenever the Shadow King is near. It’s not biological, not a physical virus, it’s psychological. David goes to Admiral Fukiyama and learns the extent of the threat they are dealing with. So, while the Shadow King still seems to be the baddie this season, the new threat is what will happen if he finds his body. He is already extremely powerful, but if he’s reunited with his body — “he will be unstoppable.”

Melanie Bird (Jean Smart) is distraught about what’s happened with Oliver. Her change is evidenced in a new haircut and penchant for getting very high (in what’s truly a mesmerizing visual). What will her being out of sorts do to the Legion crew? She has an extended conversation with Sydney, and I think I could listen to her talk all day. On men she says: “In, out…with all their important things they do…and off they go, a day a month a year, forever….it’s how they control us, their absence distracts us from our lives, the things that matter.” She goes on to say that, what “after they come back, things are never the same.” This probably strikes a nerve with Syd. Every word and phrasing in Legion seems intentional and layered. So I’m interested to see how things will change, and how that will make Syd feel. 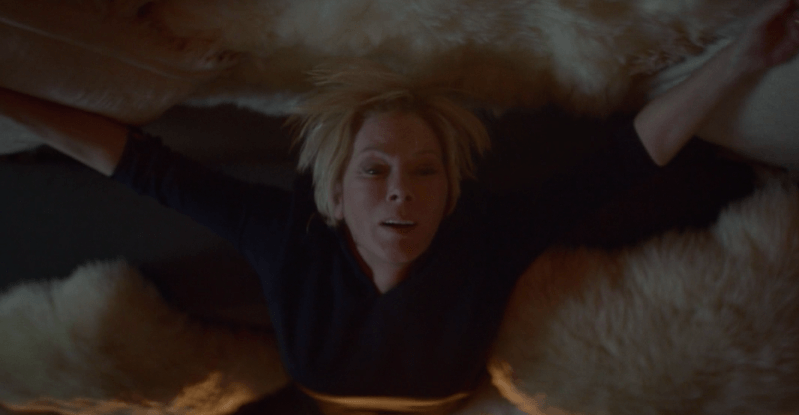 Someone To Explain Things

New to the mix this episode, is a narrator (Jon Hamm!?). I think it would be hard to institute a narrator in the second season of a show, but for Legion it works. Talking of puzzles and “a maze in your mind” (which is very Westworld), the narrator is a nice thematic guide in a show like this. He talks of various parables and ideas exploring madness and delusions, what it takes for something to seem real or not. This allows for the more philosophical and metaphorical musings that the show is clearly invested in. “You’re inside the maze and you can not escape, welcome to madness,” the narrator says.

The other portions of “Chapter 9” regard Cary finishing an “amplification chamber,” to make David remember the year he was trapped in the orb. And when he finally does remember…it’s worth the wait. In the orb he sees…Sydney!? Dressed a bit differently, she can’t speak but instead draws pictures with a wand-like light source. Future Syd explains that she sent the orb, that she is speaking to him from the future, and that David should help the Shadow Man find and reconnect with his body.

What I love about this show is how much of an experience it is. Take for instance this scene inside the orb where we see Future Syd draw out what she is trying to say. We almost have to figure out the images alongside David. As an audience, we really feel part of the action. Finding out that it was SYDNEY who sent the orb was a shock, and it was fun to find that out alongside David. FUTURE SYDNEY!? “HELP HIM”!? WHY does she want him to help the Shadow King? Is she in danger? I’m scared!!

Later, it seems David doesn’t know what to make of the present Syd, but he gives Syd a compass that will always point to him and says he won’t keep things from her (but he does not tell her about what he remembered seeing in the orb). Finally, we get to see the club dancing scene that has been hinted at throughout the whole episode. I’m not sure what I expected from this, but it wasn’t the choreographed dance sequence that followed. It works, as does most of this show’s creative detours. David’s subconscious meets up with Lenny and Oliver in the nightclub. I’m not sure if it is literal or imagined in their subconsciousness, but their dancing and control of the club patrons seems to indicate he might help the Shadow King, per Future Sydney’s request. 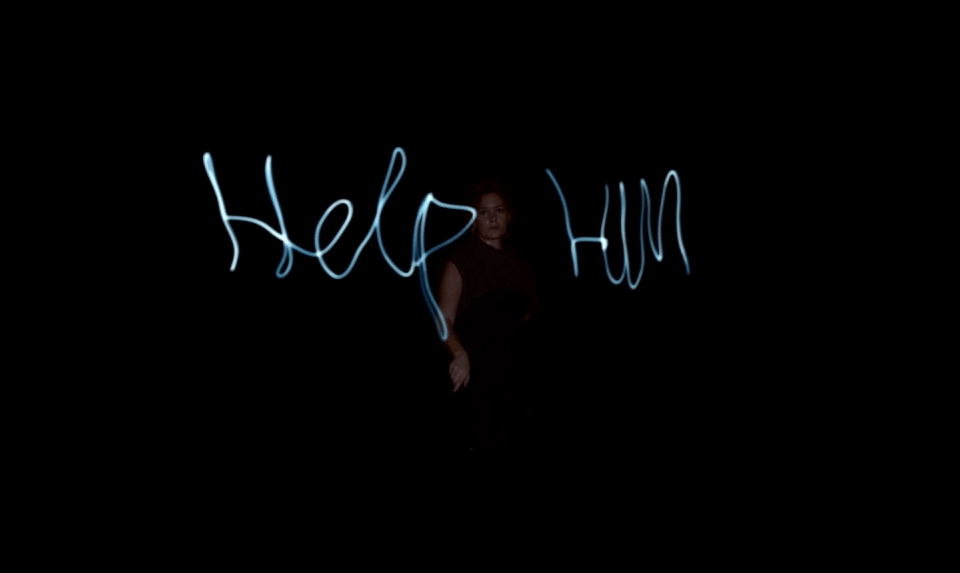 As our lone brother (and resident “memory artist”) in the show, I want to devote our own section to him. Okay, Ptonomy (Jeremie Harris) looks GOOD. He got a haircut, and I believe new, rounder glasses. He looks fresh! It’ll be interesting to see what happened to him across this year. He distrusts David saying that he has no recollection of the past year (since Ptonomy can see some form of memory there) and seems to have taken on a more cautious, and maybe more authoritative, role now that Melanie is in a different head space.

We’ll be covering all of Legion so come back weekly for new recaps and other news under the Legion tag.