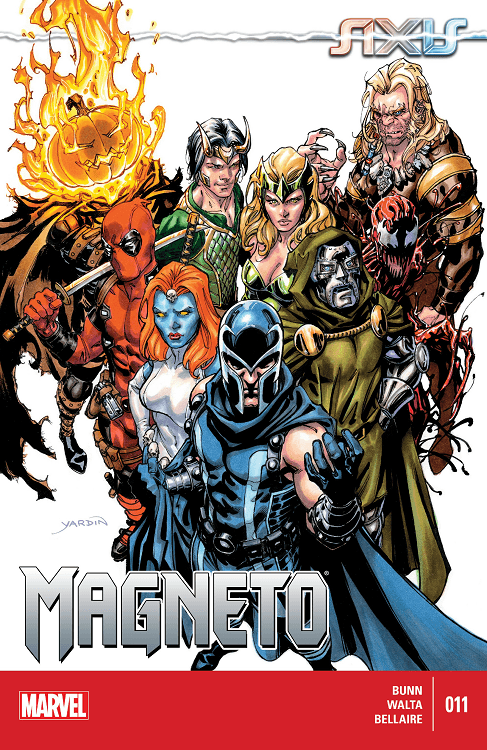 Magneto is front, line and center of the Axis conflict as is his solo comic with mixed results. I’ve come to grips with Magneto’s role in the Axis crossover as I was once resistant to see his excellent storyline stopped in its tracks to accommodate the crossover. However as one of the strongest mutants alive (still) and him dosing up on some MGH (Mutant Growth Hormone) that bring his powers close to what they once were, he should be on the first line of defense against Red Onslaught, who cares little about fighting heroic figures and more about killing everything. The first half of this issue was tough to digest as it has Magneto, Da Metal Slinging and always confident (read: arrogant) Gawd running from a fight and essentially leaving friends and foes alike to die on the battleground. If Magneto left Scott Summers under the might of a Sentinel with a “tell Charles I said Hi” type of sign off, I could see that. But this is Magneto wallowing in self-pity and saying, “well, I gave it the old college try.” I’m not feeling that.

Maybe the ends justify the means here as with some persuasion, Magneto then recruits the anti-Uncanny Avengers (check the pose) or in other words, a bunch of cats who have no real moral center. The highlights of the book come in the individual recruitments of Magneto’s new team, especially Deadpool, who thought he could sneak up on Magneto because of his “noise dampening helmet.”

Magneto hasn’t been as good as it once was since it began the Prelude to Axis storyline, but there was some redeeming qualities in this issue, at least for what it will lead to. I would’ve liked it to arrive at the same place, but without the uncharacteristic abandonment by Magneto, but you know, some of us are about the journey, some about the destination.