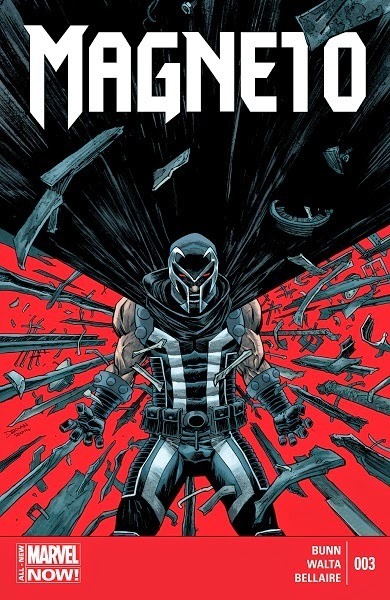 Keeping with the momentum of last month’s issue, this month Bunn takes Magneto deeper down the wormhole in learning who is making these sentinel abominations and why their doing it. I realize that one of the things that makes this book and its premise very fascinating is that we’re still dealing with a Magneto who’s powers are just a fraction of what they once were. As he comments in the first few pages of this book, if he were who he used to be, he would bring this facility down with just a thought, but now he has to use more conventional methods of stealth and infiltration. Its a nice way of exploring Magneto’s abilities and resourcefulness when he doesn’t have the brute force that we know him for. Though, as you’ll see with what he can do with a paper clip, it doesn’t take much.

If there’s anything lacking in this specific issue, its that the person responsible for building the sentinels has a pretty lousy explanation for why? There is an attempt to bring a sympathetic light to why she has made these nightmare machines, but it kind of falls flat once she lays it all out. Even so, she is just a means to an end as Magneto realizes that there is still a bigger fish out there as a lead for the next book.

Overall, the book continues to progress by highlighting Magneto’s ruthless approach of investigating and showing the cunning he possesses in the absence of his forgone absolute power.