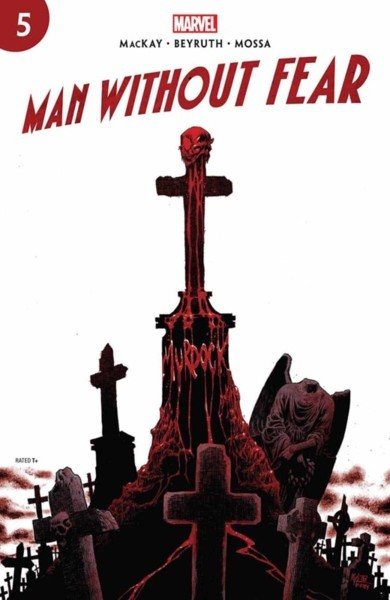 Fear fought pain and pain won. In the conclusion to the “Man Without Fear” miniseries Daredevil is back. After supposedly deciding that he was too broken and too afraid to continue being a superhero, Matt Murdock has a change of heart. Like the first issue, Daredevil spends the comic in his own head rather than engaging with any friend or enemy from his past adventures. In true montage form, Murdock goes from finally getting a grasp on walking with the support of beams to push-ups on an exercise ball(and he has the beard to show it). The specter of fear still plagues his mind and ever present with its doubts and grisly predictions but you can see an accepting serenity on Matt’s bearded face. Even with fear literally (fine . . . figuratively) breathing down his neck he pushes on, embracing pain as a motivator. The mantra, “What is pain for? It keeps us going”, we were introduced to issues ago reveals its origin in Daredevil’s mind. 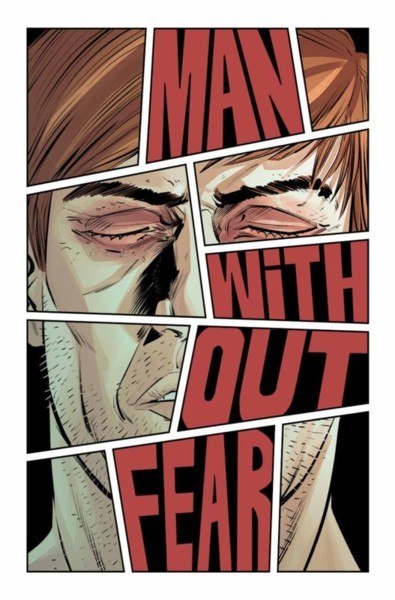 Murdock recalls his early days, newly blind and young. His father, Battlin’ Jack Murdock tells him to be strong and vigilant. His meaning is clearly to help Matt live a fruitful life despite his disability but how could he have predicted that his future would be one more of physical pain than academic rigor. There is beauty in the side by side shots of the father in the ring and the costumed hero punching Bullseye. When Foggy Nelson comes by the hospital room in the last page he’s met with only an empty bed and an open window. 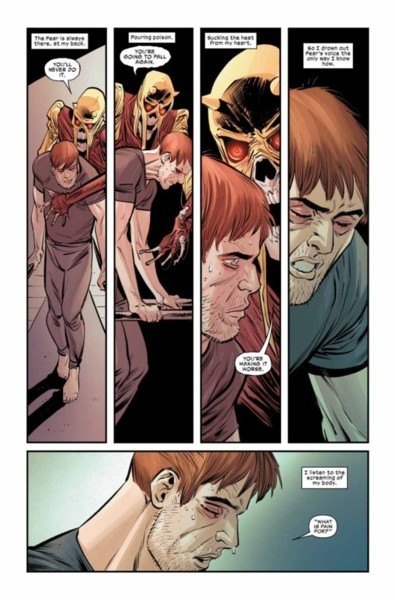 So Daredevil’s back in action. February marks the re-release of the title series on the heels of this book. We already knew that this series was to be the return of Daredevil rather than his death but most of it was beautiful and compelling. Being the last issue, the cliche comes full circle so it’s hard to be wow’d. This comic would be fine with its poetic montage if not for the distracting art. I know Matt has been down and out but in his recovery issue he shouldn’t look like his subconscious pain and fear monsters. That said, the creative team won me over with a panel of Daredevil’s rogue’s gallery drawn in the style of the Last Supper painting. The only thing that’d fill me with more glee would be if Stilt-man was in Jesus’ chair instead of Kingpin but a boy can dream.