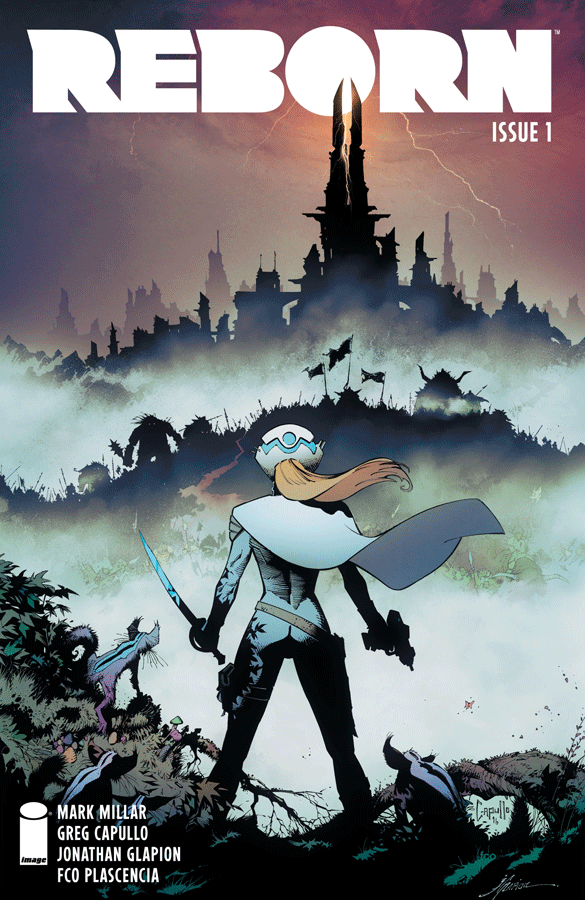 How does he do it, folks? Take a comic book filled with powerful superheroes, dastardly villains, revolting creatures and intrigue beyond your wildest dreams, yet give it such a personable feel. Make it so tangible. Force you to imagine that you could theoretically be a part of this vast world he has created. For that Mark Millar, I thank you. Reborn debuted back in October 2016, so it’s full steam ahead on these catch-up reviews. If you ain’t about that spoiler life, go cop the book then peep the review once you’ve read it. The rest of you know what it is.

Now, let’s get down to business. Reborn starts off with a trip down D.C. sniper memory lane. It’s 2002 in Minneapolis and someone’s on a roof bucking off shots with the light pole barrel. The chopper stupid long wit a scope, so he’s delivering more fades than a Dominican barber on a Saturday in July. It’s here, amid the chaos and carnage, that I realize I’m about to witness some visually stunning, awe-inspiring panels all throughout Reborn’s run. The detail and pencil work on that ‘My dad owns a fortune 500 company’ Ken doll dude getting his dome obliterated while sipping on his macchiato with skim milk! I’m no ballistics expert, but I know on-point bullet entry and exit depiction in that image was astounding. This opening finished with the sniper taking out an old man, who then falls to the ground. Which brings us to the next chapter of our story.

It is a brief but telling chapter. A young man wakes up from the same position that the old man fell into after being shot. T’was like using the perfect transition word in literature. We see a woman shouting something about knowing they look different and not being able to explain because they have bigger issues at hand. Pan to an army of ferocious beings marching on this squad of people holding weapons, all looking as confused as a baby bird that just fell out of it’s nest. The dark haired man who we first saw waking up to this madness says it best, “What the HELL?” THAT’S WHAT I CALL SETTING THE TONE!

Now we get transported to present day, where we see our main character recalling some morbid moments. Mrs. Black remembers the sad, gruesome, and unexpected deaths of her mother, father, and husband. The latter murdered 14 years ago by the Minneapolis sniper. She’s speaking to her granddaughter, shitting on the Notorious ‘Ready to Die’ hospice care approach that many seniors are forced into after retirement. Her granddaughter don’t know shit, talmbout the doctors are really good up in there. How do you know?! Are you the one getting bathed by these people? Are they wiping your ass 3 times a day? Sit down. Be humble, child. Next we see Mrs. Black speaking to a nurse. She immediately hops back onto the hate train and starts shitting all over religion. Luckily, the nurse took things in stride and broke it down to Mrs. Black so real that all she could respond with was, “That just might be the sweetest thing I’ve ever heard.”

The Queen (maybe runner-up with Lady Olenna Tyrell out there) of keeping it real, Mrs. Black didn’t make it to next day. She missed her appointment with the handsome physio. A stroke claimed her life, but that is just the start of this tale. As the name suggests, it appears that Mrs. Black..or Bonnie as she is called when she looks like a young blonde snack, has been reborn. Reborn into the best strikingly blue-eyed version of her younger self, clad in this dope all white suit, laced with helmet and cape. Maaaannnnn, that transformation was dope as hell fam! And once again, the attention to detail in the chandelier moments of her life flashing before her eyes, shattering into her reborn self! That artwork was mirroring ice crystal jutsu dopeness cascading over reincarnated yoga flames.

This new world that she has been cast into is very different from the one she left. A patrolling enemy craft immediately fires at her, but not before a large man clad in this huge helmet, tattered clothes, and weapons galore comes to her rescue. He destroys the aircraft with precision and ease. He slays a dam dragon with a battle axe and forearm strength, it was boss. He raises hell. But it is seeing Bonnie in the flesh that actually scares off some wizard lookin’ guy commanding the Voldemort in the face ass creatures warring with these reborn folk. That’s my guess at least.

Big burly Robert Baratheon Battle of the Trident lookin’ dude takes his helmet off, yells out “Bonnie” and she can’t believe her ears. Hell, she can’t believe her eyes when she sees her handlebar mustache having ass father! Even her old dog (who has grown to Battle-Cat levels of brolic) comes running up ready to see the protector they’ve all been waiting for. They’ve reunited, but now it’s time to meet up with the others. Clearly, this is a world where Bonnie will be seeing some old familiar faces.

There we have it! The first issue of Reborn. Great start to this series. Excellent place to leave a little cliffhanger. Already, I love the range of characters rich with personality, bravado, innocence, and naivety. So hype to see the various settings as intriguing as every new planet in the Star Wars franchise. Proper pacing and action. Let me just shut up and get to the next issue.

9 Dragon Slayings out of 10
Are you following Black Nerd Problems on Twitter, Facebook, Tumblr or Google+?
24 Shares