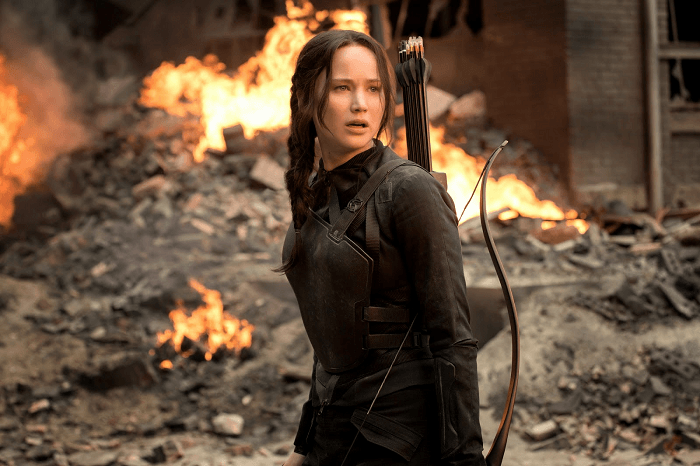 ***While the book Mockingjay was released in 2010, this is your spoiler alert for both the book in its completion and the movie, Mockingjay: Part 1.***

Several years ago I was introduced to The Hunger Games, a new book gaining popularity as a young adult dystopian novel featuring a female lead. I borrowed a copy from the library and was introduced to Katniss Everdeen from District 12, and she was everything I wanted her to be. Clever, bold, and independent, The Hunger Games’ leading lady was instantly a crowd favorite, and the world of Panem made for a breezy thrill ride as I sped through it in 3 days of subway rides and bedtime reading. When the second book came out, Catching Fire expanded the world from the Battle Royale of the games, to the larger theme of dystopia and revolution. “Tread carefully,” I remember thinking. But most of my thoughts were still preoccupied with wishing Katniss would finally leave Peeta to die and ride out with Team Gale, so I was still a fan, to say the least. Before the first movie was even announced I tried to pre-order tickets by holding my Fandango app in my hands and concentrating really hard.

All of that ignores the existence of Mockingjay.

Mockingjay genuinely makes me angrier than any book I have ever read, including Sarah Palin’s Going Rogue, Marvel’s Decimation, and Gym, Tanning, Laundry by The Situation. It’s worth saying that any novel evoking a reaction such as mine to Mockingjay must have done something right; the opposite of love is not hate, but indifference. I am far from indifferent to Mockingjay. I actively hate it. I could open a random page of that book to get pumped up for a fight or a basketball game. My leg twitches, I feel warm – emotionally it causes the same symptoms of watching the Batman versus Bane fight in The Dark Knight Rises, as they fall on exact opposite ends of the awesomeness spectrum.

[divider type=”space_thin”]
When I finished reading Mockingjay, I set the book down, closed my eyes, and took a deep breath. Writing my thoughts was the only thing to keep me from screaming, so I opened my laptop, clicked “Compose” to my best friend, and yelled through my keyboard.

“ARE YOU FUCKING KIDDING ME? AHHHHHHHHHHH!!!!!!!

Okay, I need to calm down. Let me start with the good first. The story of them trudging through the Capitol was great. She and Johanna trained to get there, she tooled up with armor and guns and her strike team, and they stormed the city. It was a ton of fun to read as they slowly made their way towards Snow’s mansion, losing Boggs, Jackson, and Castor along the way. Finnick had a good death, too. He held off the mutts underground so the rest of them could escape, and Katniss blew them all up with the Holo.

Alright, that’s that. Now let’s talk about the rest.

Gale and Peeta BOTH live? THEY BOTH FUCKING LIVE, ARE YOU SHITTING ME? Peeta and Katniss have children playing in a meadow?! Gale – the badass who earned my respect in Mockingjay when he was finally given an actual voice in the series – left to get a job in another District? THIS IS A FUCKING JOKE, ISN’T IT? NO, REALLY. THERE’S EXTRA PAGES HIDDEN IN THE HARD COVER OF THIS BOOK THAT CONTAINS THE REAL ENDING, RIGHT? Dude is the picture of loyalty and commitment, and he abandons Katniss for a job? And readers aren’t even given an EXPLANATION?! And Prim – PRIM FUCKING DIES IN A PARAGRAPH, ARE YOU FUCKING KIDDING? The foundation of the entire series lay with that girl being the hope of the future. Prim represented everything worth preserving in this world, AND SHE APPEARS AND DIES WITHIN A PARAGRAPH? AND KATNISS CRIES A LITTLE AND THEN HAS BABIES PLAYING IN A MEADOW TEN PAGES LATER? FUCK YOU, MOCKINGJAY.

Suzanne Collins wrote that ending overnight and she knows it. I can only hope she feels guilty about it. She got an email from her publisher saying she needs to have the book finished by morning, so she decided to order Dominoes and pull an all-nighter like a college student, AND THEN SHE GOT DROWSY, WROTE ABOUT EXPLODING PARACHUTES, HAD PLUTARCH EXPLAIN THE ENDING TO KATNISS (AND THUS, THE READER), SO SHE COULD GO TO BED.

[divider type=”space_thin”]
What’s so frustrating is that I actually LIKED it up to the point Katniss finally made it to the mansion. 200 pages were spent following the slow progression through the city to get to the mansion. I thought, “Oh shit, this is about to get REAL.” And then a few paragraphs later Katniss wakes up FROM PASSING OUT FOR THE THOUSANDTH TIME AND HAS THE ENDING EXPLAINED TO HER. No closure with Gale, no surprising Snow in his mansion, no final climactic confrontation, no cameo from THREE characters presumed but never shown to be dead. dal;kjgd;lakgjedsa;kljgd;akls JUST THINKING ABOUT IT MAKES ME WANT TO GO BRUCE BANNER AND RIP THIS BOOK APART.

Here’s an alternate ending that took me SIX SECONDS to think of:

Katniss and Gale storm the mansion where they search for Snow. The mansion is a labyrinth of guards they kill by covering each other and showing all the skill they developed by hunting together of the course of their lives. They find themselves in ANY PRECARIOUS SITUATION. All looks lost, until Jackson (only assumed to be dead) or Johanna (who promised she’d go as far as stealing a hover craft to join them in killing Snow) appears and does something badass to sacrifice themselves to get Gale and Peeta out of said situation. Katniss has the opportunity to kill Snow, but it would somehow result in the death of either Gale or Peeta. One of them – EITHER FUCKING ONE OF THEM – sacrifices themselves or gets killed. Katniss is destroyed mentally, slowly tries to cope and move on, and Prim represents the hope of the future of their society. Fucking DONE.

Instead we get Gale moving to North Dakota to work for UPS or some shit and Peeta lives too and the series ends with babies in a meadow. I’m fucking done with Suzanne Collins, yo. I won’t even go to Brooklyn anymore, I heard she lives there.

I already knew I was being duped the second we learned it would be released in two parts. I knew it, you knew it, and we all deluded ourselves because geeks live off hope. Hope of awesomeness is our number one source of sustenance. Hope is to geeks what energon is to Transformers, and Hollywood knows it. How else can you explain Transformers 4 grossing $1,087,404,499 worldwide? You can’t. Teenage Mutant Ninja Turtles, Green Lantern, hell, they could greenlight Gargoyles right now and cast Nick Canon as Brooklyn, Cedric the Entertainer as Hudson, and introduce Kelsey Grammer as Goliath and I’d still pay $15 like “he’s got a deep voice, it could work.” I wouldn’t even be mad if they altered Mockingjay to make it better – go ahead Lionsgate, get that money, the source material is landfill anyway. 300 pages of young adult fiction doesn’t add up to 4 hours of film unless you add loads of action scenes to fit in between plot points to stretch the story, so that’s what I was looking forward to considering the dumpster fire that was the book. My mistake, I didn’t realize I actually bought tickets to 123 Minutes of Crying: The Katniss Everdeen Story.

[divider type=”space_thin”]
Did you count how many arrows Katniss Everdeen shot in Mockingjay, Part 1? You don’t have to count higher than 1. Think about that. Really let it sink in: defensive end JJ Watt has more touchdown receptions than Katniss shot arrows in Mockingjay, Part 1. In the only action scene of the entire movie, Katniss springs into action, notches her bow, shoots down a plane, and rescues… no, everyone died. Compared to Arrow, Katniss’ archery skills are a D+. Oliver Queen would cut Katniss from Team Arrow and hand Canary her bow, like “I’ll never take you for granted again.” By the hour-mark of the movie I wanted Katniss to tag out and let another hero into the ring. Johanna, Margaery Tyrell, tag anyone. Give Neil deGrasse Tyson a calculator and let him math the capitol to death.

[divider type=”space_thin”]
This is when fans of Mockingjay say the point is to show Katniss’ PTSD and the effects of the trauma of the games. Heard it all before, and I’m glad you enjoyed the movie. I understand the ousting of a character’s fire, but that’s not to say Mockingjay, Part 1 does well depicting it. In fact, it portrays it horribly in terms of plot exposition. About an hour and fifty minutes into the movie is when Katniss makes her first significant decision, which was to air herself on television to speak to Snow. The other decision she made was trying to save Prim during a bombing, before Prim made it out just fine like “I went to save Buttercup, which means I’ve saved more lives in this movie than you.” Ninety percent of Mockingjay, Part 1 was Katniss responding to other people’s suggestions and demands. Rather than the protagonist leading the development of the story, she’s written to be reactionary to every horror around her in what feels like the longest Sansa Stark chapter in history.

The movie also didn’t give Jennifer Lawrence an opportunity to act, as her range of emotions was covered with one facial expression, having Katniss on the verge of tears. Moods have to be offset with their opposites to make them feel real and for audiences to care. Dramatic stories need moments of humor, just as comedies need moments of sadness or emotion. They have to establish a baseline, so that when you pull away from that baseline the audience reacts. If a movie is 100% action and explosions it’s just exhausting to watch, which is why you needed to take that nap after giving your money to Michael Bay. Mockingjay, Part 1 is the emotional equivalent of an overdone action movie, without nearly enough endearment intermittent in the drama and misery. 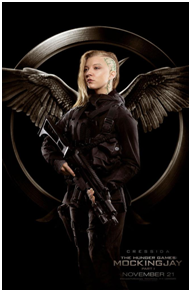 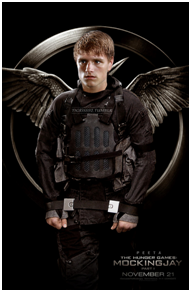 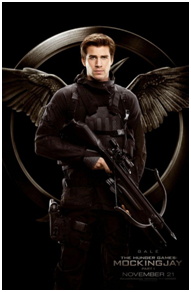 Haymitch, played by Woody Harrelson, and Effie, played by Elizabeth Banks, offered the best scenes, cutting into the numbness with sprinkles of comedy. Only they were used for a total of 5 seconds and were hardly enough to offset the constant gloom that turned boring before the first action scene even began. Instead, additional screen time was dedicated to convincing us to feel sorry for Peeta. Peeta, the kid who wouldn’t survive Detroit, let alone the Hunger Games. Did you feel sorry for Peeta? Or Prim, and all 3 minutes of her screen time? Unless Mockingjay goes Lazarus with Rue in Part 2, consider me not caring about any character’s passing. Only characters worth a damn were in the hospital the whole movie. Finnick will go out like O-Dog in what I hope is an epic scene in Mockingjay, Part 2, and I could watch Johanna rip off her IVs on repeat for 2 hours as a standing reminder of the person I wanted Katniss Everdeen to be.

How I wish I liked the ending of a series that began with such a promising character. You want to know another series that captures a similar challenge, but better? Try The Legend of Korra. Follow a stubborn, headstrong, spitfire woman face trauma, learn humility, and evolve without descending into the archetype she originally escaped. In the meantime, Mockingjay will be my personal litmus test to determine whether we have compatible tastes in media. When someone recommends I watch something on Netflix, I ask if they enjoyed Mockingjay. If they begin to smile, I’m already halfway facing the other direction. “I can’t even trust you though.”

Original review of Mockingjay, Part 1 by Maya Phillips can be read here.