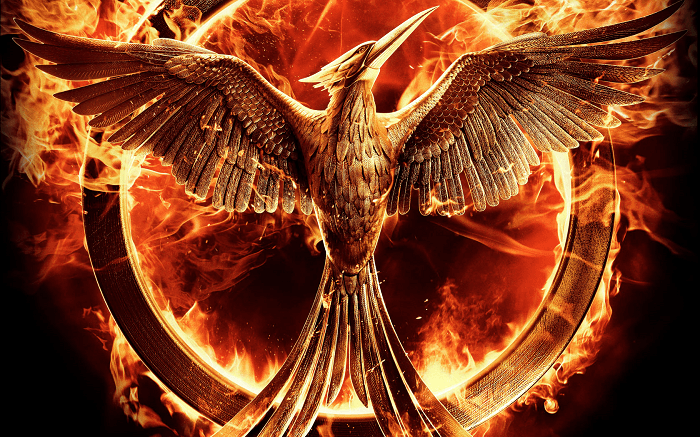 It’s pretty hard to ignore the thick layer of irony coating the release of the third installment in the Hunger Games series, “The Hunger Games: Mockingjay Part 1,” the week before Thanksgiving, so with that in mind, I spent two hours of my weekend of thanks checking out Katniss Everdeen take the helm of a Panem revolution—or, to be more exact, cry and do photo shoots—and here’s what I thought of Katniss’ latest cinematic adventure.

Let me start by saying “Mockingjay” isn’t my favorite book in the series. The first book in the trilogy was my favorite, my problem with “Mockingjay” being that we’re taken out of the careful structure of the Games and introduced to a wider stage—Panem—with a much more significant conflict: the growing revolution. I recognize my problem is simply that I’m a creature of habit and felt comfortable relying on the clean-cut plot structure that the Games presented within the first two books: Katniss is sad about life in Panem, gets picked for the Games, fights for her life, then defeats the Games. But the trilogy wouldn’t be what it is if the scope didn’t widen in the third book. Either way, we benefit, because in “Mockingjay” we get something totally different from the first two books plot-wise; we get significant emotional development from Katniss, and we get the juicy political drama and revolution that has been all the rage in YA dystopian fiction lately. We get that in the movie too.

“Mockingjay” is a pretty depressing book, certainly the most depressing of the series, due to the constant casualties and the absence of Peeta as Katniss’ loving, hopeful other half. The film did well to capture this bleak tone. The scenes that took place in the underground District 13 felt dank and lifeless, and the carnage and rubble we see of the lost District 12 and the destroyed District 8 drives the point home. The most stirring parts of “Mockingjay” captured Katniss’ responses to all of the horror around her and the pressure she shoulders to be a symbol and leader of the revolution, even though she’s so young and still reeling from the consequences of the Games. Jennifer Lawrence has some great moments of portraying Katniss’ pain and fear, and her love and concern for Peeta is palpable. … However … we really didn’t need two hours of it. There’s a difference between a smart, introspective cinematic character study and two hours of filler. “Mockingjay” is a book of action and rebellion. You miss a lot of that in the film.

In terms of the Katniss-Peeta-Gale love triangle, I must admit that I was never very interested in the romantic side of the series; besides, even though Katniss may be unclear of or unable to admit to her romantic feelings for Peeta, her feelings are pretty clear from the beginning of “Mockingjay,” which takes away the mystery of the romantic drama. The movie made me a tiny bit more invested in their relationship, and Josh Hutcherson’s wounded, tortured Peeta really contributed to that. I’ve never been a fan of Peeta, the weak, lovesick character who—let’s be honest—lacks the courage, talent and sheer badassery of Katniss. But with Hutcherson’s acting and the makeup job, it’s hard not to feel for Peeta in “Mockingjay.”

My main issue with this film is the fact that it was split in half. Sure, it’s a trend in Hollywood that is meant to generate more money and hype for movies, but the quality of the films suffer as a result. We know the action is ultimately leading to the final face-off against the Capitol, but because the final book was split up into two films, this first part just feels unnecessarily drawn-out; the pacing is slowed down and all the dramatic momentum we would have had if the adaptation was limited to a single film is lost. The second part of “Mockingjay” is hefty in terms of the action and the death toll, but I still would’ve preferred a longer film than two separate ones—especially because now the second half of “Mockingjay” is just going to be packed full of death and revolt, so everyone who hasn’t read the books is going to feel like they’re being socked in the gut after this mild and dull introduction. Look at it this way: “Mockingjay” is shorter than each of the individual books of “Lord of the Rings,” and in terms of action-filled plots, they’re definitely comparable. So “Mockingjay” certainly could have been one movie. Instead, in part one, we got Katniss being sad and traumatized, everyone trying to figure out how to make Katniss the Mockingjay, a few trips above ground for some propaganda photo shoots, an extremely dull rescue mission, and more sorrow over Peeta. Virtually no action. Katniss gets her badass new outfit designed and a few nifty arrows (not up to Hawkeye standards, but we all know Katniss is no Avenger) but is all dressed up with nowhere to go.

As I said, “Mockingjay” is supposed to be a pretty depressing book, and the tone of this film matches it, but the lack of action and decent dialogue sucks the little bit of life that remains in this movie. (Although to be honest, the series isn’t known for its dialogue, with Peeta usually getting the short end of the stick with declarations of love reminiscent of Anakin Skywalker in “Star Wars Episode II.” Search your feelings, Suzanne Collins; you know it to be true.) It’s definitely the Katniss Everdeen PTSD Show, but when she gets a little fired up or when she interacts with the more fun, less traumatized characters, it’s worth waking up from your nap to check it out. A good example is Woody Harrelson’s Haymitch, who I really love and who provides a grim humor to the books and films. Too bad he gets about five lines in the film. Elizabeth Banks as Effie is also adorably, painfully funny in that clueless, privileged way, but her presence in this one just feels irrelevant and a bit forced. I did like the good cop-bad cop feel of Plutarch (the recently deceased Philip Seymour Hoffman) and President Coin (Julianne Moore), and Moore’s coldness and severity as Coin felt like a good fit. As for the few other characters we’re introduced to—Boggs, Cressida, Messalla, Castor, Pollux, etc.—their presence also feels superfluous. For those who have read the book, it’s clear why these characters are introduced now, even if they did little more than walk around Katniss and look important. But for now, their lack of character development and clear relevance in the story at this point is noticeable.

Overall, the movie was fine, but don’t expect anything too riveting. “The Hunger Games: Mockingjay Part 1” is exactly what it presents itself to be: one half of what is supposed to be an action film, but you end up sitting through what feels more like the long, mostly irrelevant prologue to the actual movie that you’ve paid to see. Save that $11 and wait to see this one on Netflix.