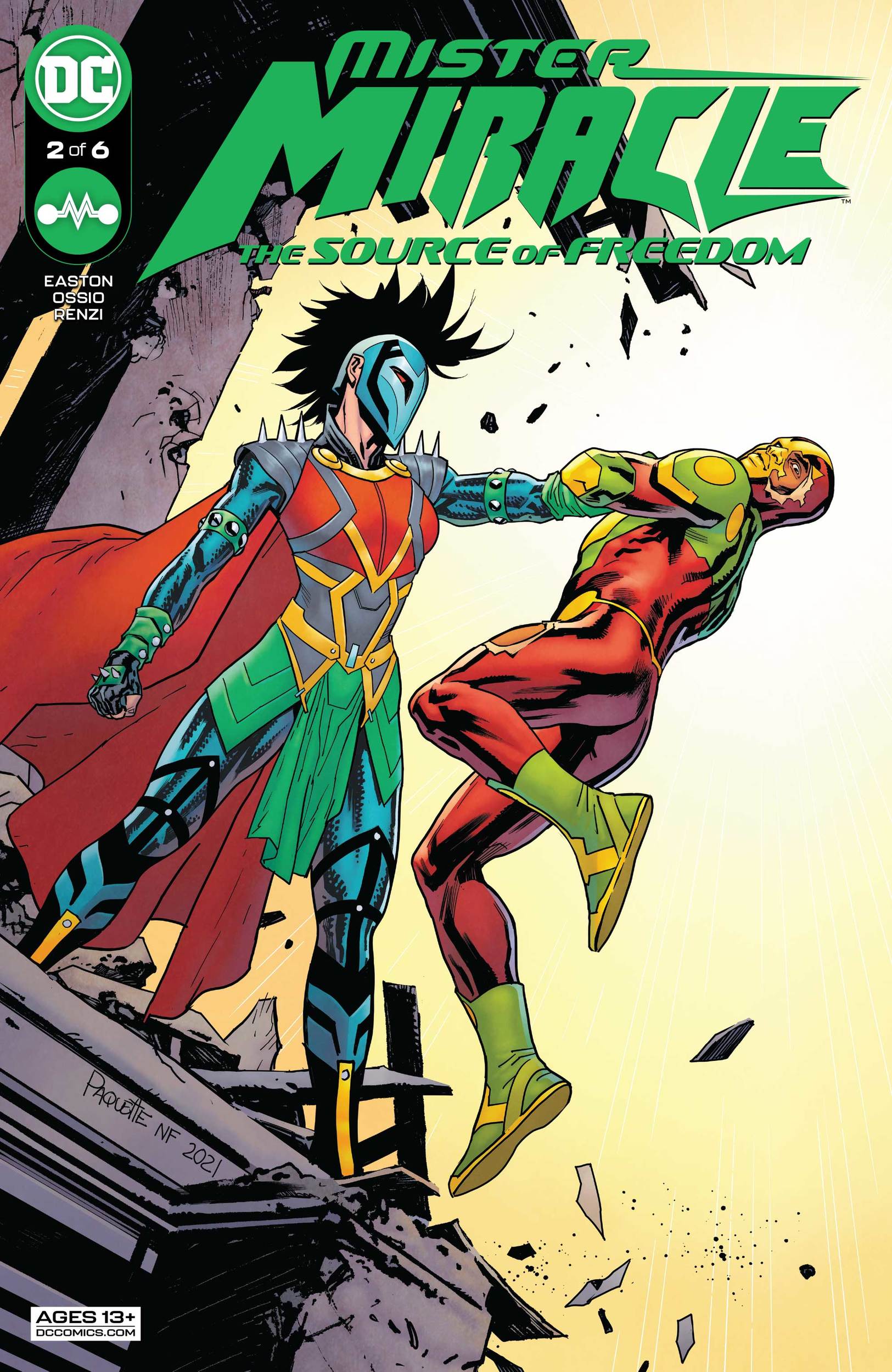 Mister Miracle #2: Source of Freedom introduces Shilo to the multiverse, while his own world finds out that he’s Black.

Two issues in, Mister Miracle has found a really good balance with its conflict. Easton puts equal effort into fleshing out the type of problems that create action, and the type of issues that create personal complications for Shilo. What’s even better is that both of these things are connected, guaranteeing that Shilo doesn’t have a good day…and probably won’t have one until the end of this series.

In Mister Miracle #2, we learn that Shilo is on another Earth than the one we’re familiar with. No boy scout in blue or scarlet speedster, at least to our knowledge. And he’s just finding out that there are other worlds out there with other variations. That’s because he’s being hunted by N’Vir Free, the daughter of Scott Free and Big Barda, and she wants his suit, claiming she’s the rightful heir. She may be right, but if she isn’t from this Earth, then that’s not the suit she should be tracking down.

Remember when I said the world found out Shilo was Black? That was a result of his fight with N’Vir Free. Because he’s such a high-profile figure, there’s always cameras close by, and one of them caught a glimpse of part of his face after the fight left him beat up and his uniform tattered. Nobody knows his identity, but they do know he’s Black, which when you’re a hero who is assumed to be white, is a big deal. And Shilo really didn’t want that to be known. So yeah, like I said, my dude isn’t having a good day.

I’ve got to say, I think it’s pretty strong writing to be able to weave those two conflicts together so expertly. They could have just as well been two separate things that Shilo had to deal with, but the fact that they’re related really just elevates the tension of the story.

I gotta give a quick shoutout to Rico Renzi on the colors for Mister Miracle #2. One, because colorists never get the love that they deserve, but also because my guy is killing it with 2/3rds of the primary colors prevalent in the book. Mister Miracle has a lot of red and yellow in his costume and surroundings, but Renzi continually finds a way to make those colors feel fresh and have purpose when I imagine that’s got to be incredibly hard. So yeah, shout out to him. My eyes are thankful.