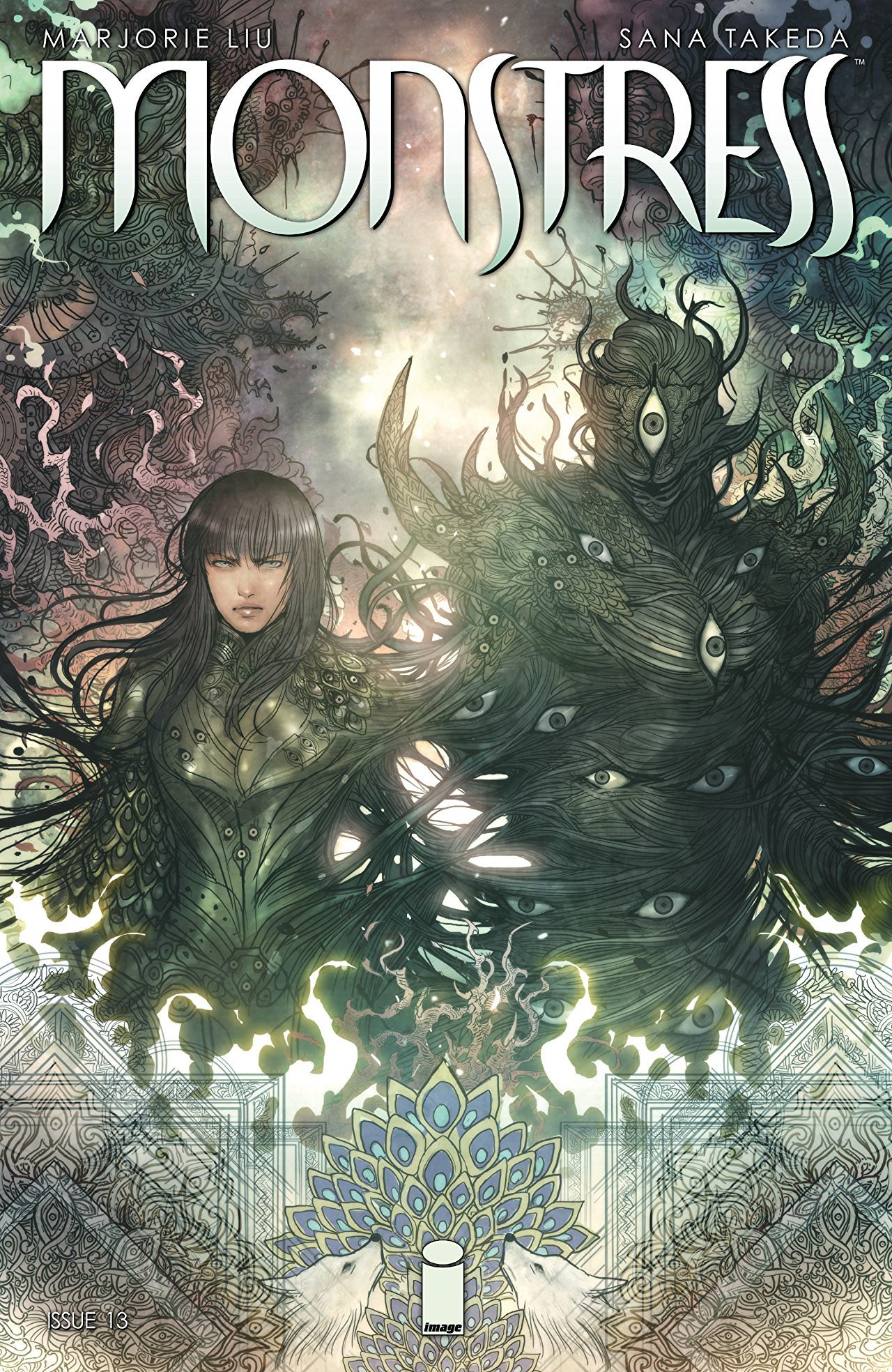 Goodness, Monstress is back in this new year of 2018 returning as a Hugo Award-winning book with a new arc and, once again, another oversize issue to bring us back into Maika’s adventures and struggles.

To recap three major drama bombs of what last issues have brought us: deception and, by default, betrayal are exclusive in this world. Maika learns that her beloved mother who, as we read on, often operated by blurring the lines of ambition and vanity, purposely conceived Maika in order for her to become something to be feared. She also purposely raised her as a weapon before their untimely separation. Not good.

It was hinted several issues ago that Tuya, Maika’s only friend in the world, someone whom she survived being enslaved with and being the dregs of society with…was confirmed as a member of the Dusk Court, someone who seeks Maika’s power in some regard or another. No bueno.

It is also confirmed that Maika has an actual living family member alive and kicking, her grandmother, yet not of human face and kind. Maika’s grandmother is of the older, more ancient variety, also of the Dusk court. She also has taken the back seat and let the proverbial chess pieces play on the board as she’s sat back in luxury…Maika Halfwolf has known nothing but strife in this life and I can’t blame her for the fight-or-flight reflexes she’s honed and has depended on because they’ve kept her alive.

Maika Being A Catalyst To Change, Both Good and Bad In This World

Thirteen issues in, it’s obvious that Maika Halfwolf, daughter of Moriko, granddaughter of an ancient blood heir of an Empress, confidant of Tuya, protector of Kippa, keeper (and container) of the deadly Zinn, who is also reckless, dangerous, cunning and naive, is the catalyst to this world-changing. With her decision in the very first issue to infiltrate a certain grand place by posing as a slave, under the guise of wrecking things and getting answers, she has set off a chain reaction that has caused ripples across the pond, making anyone and everyone take notice. Olden spirits and beasts that had been in slumber have awakened, secret sects and orders have busied themselves, loyalties have been questioned, contracts have probably been drawn, blood has been shed and bodies have certainly dropped. There have been shifts in the non-physical world as much as there have been in the physical world and it has been a fascinating and terrifying journey to see Maika being the cause of much of this.

Here, in this issue, we start to see a glimpse of something more for her, not a savior, but someone whose actions are provoking even the hearts of some to look past what’s been normalized, which is dangerous but also needed. This issue continues to surprise us with individuals finding others who want something better, and shows us the violent swing of how it’s been detrimental.

At 40 pages, this issue is, of course, bringing us back to the world that Monstress takes place in. Yet it is not shying away from allowing folks we haven’t seen in several issues to drop an, “Excuse me let me reintroduce myself” on the mic. I was pleasantly surprised to see such a person whom I was greatly intrigued by, and who gave a hell of a first impression, back on their bullshit, sitting among the cats, readily telling our girl the plan. They are easily one of this issue’s best reveals and it is a welcomed sight, even in this matriarchal ruled world. The page in which we first see them is in lavish fashion, indeed: they are seated amidst a page with several other characters and lots of glorious detail added by Takeda.

Master Ren continues to be shifty and shady, as we all know him to be, after an illuminating scene where we are once again reminded of the prejudices and power structures in place of the land (which ultimately works to his advantage). To what ends? We won’t know until later and that’s another plot thread that I hope wraps up with Master Ren not being at the mercy of having his tails cut off. Maika has had allies, like temporary allies for a spell, through the run of this book often enough to where it’s not a surprise to see someone offer aid (as everyone needs something in this world). More often than not, Maika and company have needed this aid so it was taken. Here we’re starting to see a greater line being drawn in the sand: there are people not complying with their orders and who have simple goals such as “I just want to see my people live,” which isn’t a foolhardy desire in this world where people are slain without a care, where children are dissected, where slaves are sold. Liu is patiently and painstakingly casting out her net to flesh out Monstress once again. This ties in greatly with another favorite scene in this issue which brings in another web of potential allies wanting to save lives, expanding some plot threads that I look forward to chasing.

I can’t and won’t gloss over Maika’s struggle in the maintaining of her connection of the Monstrum, the dark and deadly creature named Zinn that resides within her. At several times…okay, often, he has proved to be less of a tool and ally and more of a liability to Makia and most things living and alive in their presence. While her control of his…hunger is far from being at a level anyone in their right mind should be okay with, it is comforting to know that at least they have some sort of truce with each other. I only say this because of the past memories these two share, haunting dreams and past traumatic events that stain the world and the life they both led. Whereas our Halfwolf herself has surely seen and viewed herself as a literal monster before Zinn, he hasn’t aided in reassuring her that she isn’t.

Maika is transforming. Into what, you may ask? It’s still far too early to tell. This issue at least hints at her being at the center of so much change in the land, being seen as a catalyst both good and bad. Also…she’s toying with the idea of friends or at least achieving more with people who can become friends one day. Look, Rome wasn’t built in a day and teamwork makes the dream work. Maika can’t do this alone and she’s begrudgingly taking steps, baby steps. Monstress has been away for far too long and stepping back into it is a breath of fresh air. I’ve so missed this comic and this issue is a well-crafted ease back into the madness and fury and opulence that is Monstress. I will add that fans may have to hit the back issues to familiarize themselves as the break has been long and you may have forgotten about a character or two. This is a strong entry back into the series. 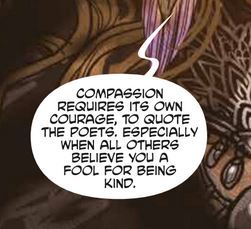 Reading Monstress? Find BNP’s other reviews of the series here.