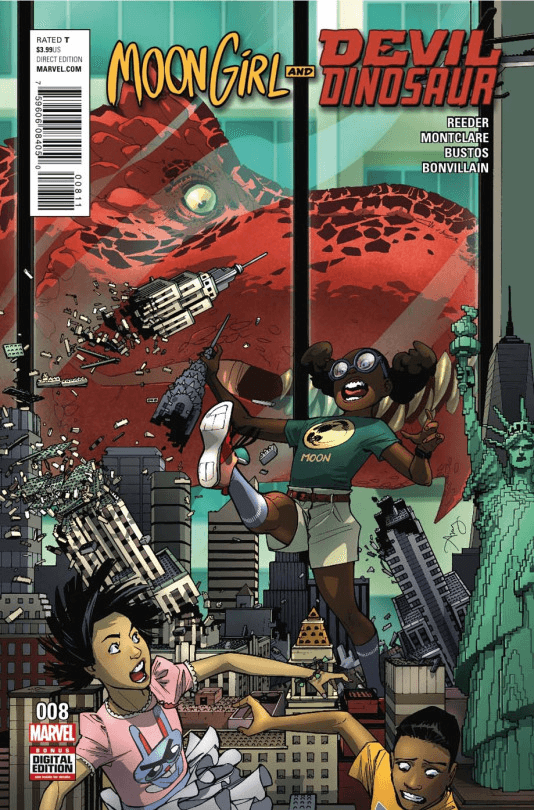 More than anything, what sets apart the duo of Moon Girl and Devil Dinosaur from all their mainstream comic counterparts is the limitless possibilities for these two to get into wild but fun adventures and this issue takes the dinosaur by the tail as our heroes discover a little bit more about each other…from the inside.

After the heaviness of the last couple issues, as much as unexpectedly switching bodies with Devil Dinosaur has knocked Lunella for a loop, it’s nice to see the playful bounciness of the comic return. I don’t know about you, but watching “Lunella” roar and knock down entire cities of legos gave me some badly needed vicarious stress relief. Look, I know she’s not technically her self, but shoot. I be wanting to kick over some stuff and get in the face of white boys tryna be passive aggressive with me, too, Devil Dinosaur. You can take all his hotdogs, his legos, and his joy for that. 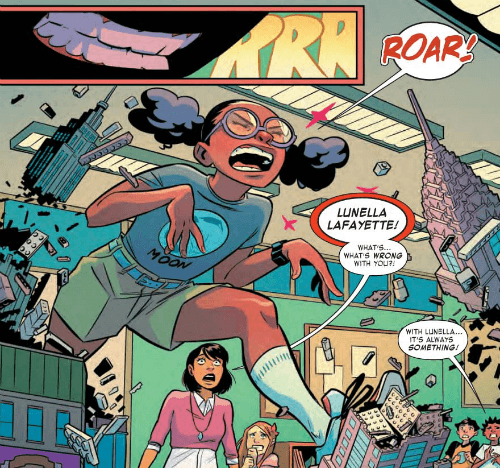 On the flip side, watching “Devil Dinosaur’s” facial expressions as Lunella not only crashes her own lab but wanders half-panicked through the city with only “hot wings” for arms and a growly attempt at the English language is hilarious. I say this as a Black woman who was once an uptight Black girl myself: sometimes you need the world to come crumbling down in the most nonsensical fashion to get a grip on what you really care about. Truthfully though, I love that Reeder and Montclare allow Lunella to handle it like a champ without losing her trademark personality, giving her just the right blend of smarts to make it through safely. While the lesson of learning to accept your friends as they are is heartwarming, the comic doesn’t feel overly preachy and reminds us what a solid all ages work like this one should be like. 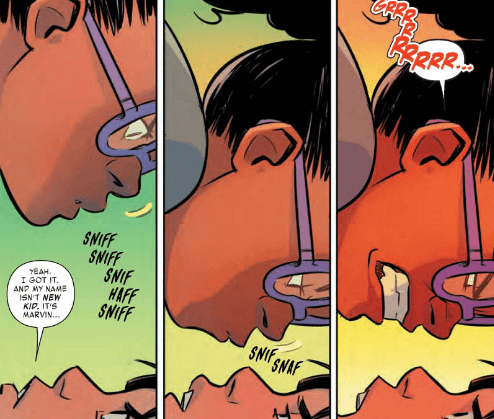 Also, I’m not sure why Natacha Bustos wasn’t the artist on the previous issue but man oh, man, does she return with a vengeance with action-packed panels and some amazingly emotive close ups that make you wonder why this series hasn’t been adapted for television yet. When you can thoroughly enjoy the story without even having to read the word balloons, you know you have a world class artist on your hands. As ever, I look forward to adding more Moon Girl and Devil Dinosaur joy to my life next issue.