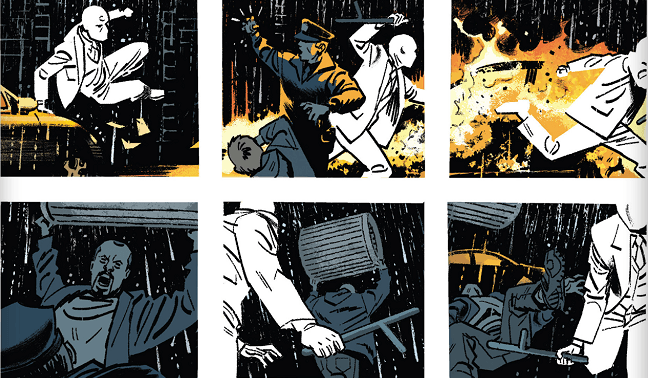 We got a new creative team this time in Moon Knight. Warren Ellis has laid the foundation down for the vigilante Sherlock consultant Marc Spector has become to the team of Brian Wood & Greg Smallwood. The issue mirrors that of the second issue (more on that in a bit). We see Moon Knight having to deal with a mercenary that is sporting some highly advanced technology. The reader is caught up in fast paced action off the bat as the merc is hunting down an African diplomat(?) that apparently (surprise surprise) done some inhumane shady shit. (sigh, come on b) Moon Knight however is intervening on behalf of this man’s life because this ain’t justice and he ain’t having that shit in his city.

As I mentioned before this is highly similar to the second issue of Moon Knight that Ellis gave us where Moon Knight was hunting down a sniper. The only difference is the gear and fighting skill of this merc this time around. This guy was able to black out a large section of the city. Smallwood did a wonderful job of Moon Knight making his way through the black out and keeping eye on his target while multitasking at the same damn time.

The big reveal that I didn’t see coming was the final page as we see who hired the merc. Now, each issue of Moon Knight is done as a one shot open and shut case. This reveal however will def have to play into the next issue or perhaps later on but this is the first essence of an arc we’re getting with the book and we are in the 7th issue. I am looking forward to what Brian Wood has in store thus far. I feel he is off to a good start. Although I wanted a dash right out the gates, I’m willing to see what Brian Does with the pace he has set thus far for the book.