Tyrell Wellick on the hotline bling with Elliot Da Hack GAWD but Tyrell ain’t no snitch…and damn sure ain’t no self-snitch so he doesn’t reveal his location just yet. But one thing he does do, is highlight the night he and Elliot became “Gods”. CLICK! Mr. Robot puts the kibosh on that conversation before the NSA puts a ear to the streets and starts listening in.

Remember last season when Elliot got fed up and frustrated with his inability to remain in control a handful of times? Then he immediately followed up that frustration by going out and doing the most reckless shit he could come up with at the time? Yeah…the homie bout to regress again, because he meets up with the plug for a batch of those good ol narcotics! Adderall is the weapon of choice this time around and Elliot wastes no time showing Mr. Robot exactly who’s in charge of this body when he methodically accentuates the popping of each pill into his mouth. Felt like I was watching a fucked-up hybrid mash-up of Sesame Street and the old Flintstones vitamin commercial. 1 pill, 2 pill, 3 pill, 12!!!

While Elliot has gone the addict route, Angela the confidante has gone full fuck it mode. Philip Price, the E Corp CEO, summons her into his office and tells her that she needs to make the interview with FOX happen despite her impressive strong arm tactics that got them the Bloomberg interview. With her new instructions, she begins to walk out of the boss’s office when she realizes she’s a level-25 Pokemon Go trainer. She 180’s that shit and drops the realness on big dog. Angie from the block hit him with the screw face and was like, “Soooo we just gonna act like I didn’t risk my name, credibility, and career to get this Bloomberg interview that you shittin on right now? We just gonna act like FOX is anywhere close to being in the same stratosphere as Bloomberg? We gonna act like Bloomberg doesn’t puppeteer business decisions like Mister Geppetto? We gon stay on that corporate fuck-boy-no-rationale behind the decisions I make because I sign your check type shit right now?” Price claps back with, “Simmer down young Cersei. You see these 2017 Himalayan alpaca couch cushions? Take a seat and let the wool engulf you in its spine tingling embrace. Please, feel free to kick off those pumps and rub those hard working feet against my pure 99% silk 1% diamond dust infused, Persian rug handwoven by Monks in the heart of the 13th century Mongolian Empire. You ever been to this ballin ass restaurant that only the 1% get to go to, so I’m simply asking you this question to stunt and tell you about the 24K gold flake decorated truffle pasta that I’m going to order when we go to dinner there on Saturday. See you then. Oh, and you were right, I’m going to do the Bloomberg interview. Dismissed.” 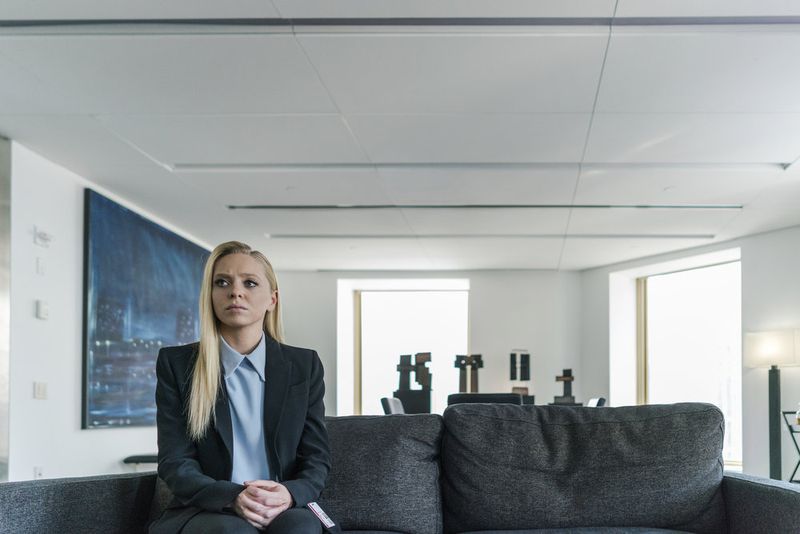 Paranoia is a Hell of a Drug.

Kernal Panic delivered on so many fronts this week. Sam Esmail is very George R.R. Martin in his methodical approach to leaving no stone unturned. We get the dopest of dope accounts on the insane history of the future location of fsociety headquarters. From dwarf sanctuary to multiple murderous families, Romero explains to Mobley, the prosthetic hacker homie, that he believes the spot is haunted and may have been proven right as we jump back to present day. Mobley is on his way to holla at Romero, but instead finds his corpse and stench infesting the pot sanctuary Romero and mom dukes have set up in the backyard. Cue the paranoia and mistrust that Romero planted in Mobley’s head wayyyyy back when they were first getting started with the revolutionary hack squad. Our newbie, Dominique DiPierro, gets the call for Romero cleanup and is soooo disappointed in the standards the NYPD seems to lack in the crime scene investigation department.

Trenton makes her return when Darlene and Mobley show up at her crib to discuss the possibility that The Dark Army has each member of fsociety in their crosshairs. Aaaaanndddd Mobley is officially shook and mad skeptical of Elliot. Darlene hits them with the take a chill pill line and chucks up the deuces.

Ray makes his return sitting across the table from someone who is actually there right now. He’s consoling a man who had something go down in the form of a beat down ass Barney purple and Cookie Monster blue pulverized face. He seems to be in charge of or working on a Bitcoin site that is losing all of its money with the servers simultaneously crashing left and right because of the withdrawals. He tells Ray he’s too basic for this business and that he needs to find a hack GAWD who can migrate the site to another secure location…then set up hot and cold wallets? My brain just hurt a little.

Elliot out here increasing his tolerance again. He thinks Mr. Robot is officially gone. He thinks he likes conversing with Leon. He thinks he found God. He thinks he understands and appreciates basketball. But y’all ninjas know thats some bull, and Elliot knows it too. After being awake for 5 days straight, he begins to succumb to madness of it all. The visuals in this scene are insaneeee.

Angela in the crib getting dolled up something severe. She clearly assumed she was going on a date and walks into a meeting with some E Corp employees of the most deceptive variety. Angela’s face of disgust is just too perfect. After Price dismisses (yeah, again) his two lackeys, he asks Angela if she enjoyed the semifreddo. She plays along nicely.

He finally gets to the point that he had been plotting on for probably 6 months when he asks, “Did you enjoy the company of those two gentlemen tonight? Those men who started the Toys for Tots program and have adorable grandkids annnddddd were in the room with Colby when they made the decision to cover up the leak that caused your mom to die prematurely? Crazy how such ordinary, seemingly nice guys could also be complete monsters behind closed doors. I’m just gonna leave this evidence that can lock those guys up forever, riiiiight here on this table.” Angela ain’t on that Season 1-Season 5 Sansa type shit though and knows not to trust a white-collar criminal for a damn thing because ulterior motives. Price keeps it a hunnit, “Oh they’ve been involved in insider trading for quite some time now, I want you to bury them for me. I’m out. Your car’s out front. Happy revenging.”

Elliot runs out of Adderall and awaits the siege on his sanity while at his prayer group. As soon as the prayer group facilitator asks Elliot if he wants to share, she opened up the group for a cerebral attack from the most potent hate filled schizophrenic hack GAWD on the face of the Earth. HE goes OFFFFF and ends his rant with a poignant, “So f**k God. He’s not a good enough scapegoat for me.”

Following her hunch, Agent DiPierro runs up on Romero’s mother with a few more questions. Mrs. Romero responds with the best line and door slam in old woman history. DiPierro, being the savvy woman that she is, offers mom dukes her hand in rolling up a few Js for her arthritis-riddled body. In her low key interrogation, Agent D Nice gets moms to reveal that Romero’s only friends was some “Chubby boy”, then while going to get a drink for moms, hits the discovery jackpot.

Elliot and Ray sit down in the diner. Ray returns the notebook that Elliot threw out after his prayer group meltdown, then tells Elliot how long he’s been without his wife, then tells him that he talks out loud at breakfast to his deceased love. Elliot like, “I’m supposed to care about this, why?” and Ray simply tells him that they are more alike than Elliot thinks. They make their way to Ray’s office and chat about control. He eventually asks about Mr. Robot and if Elliot still sees him. Elliot tries to leave, but Ray knows he needs to talk this multiple personality shit out. Ray suggests chess and when he goes to retrieve the board, Mr. Robot makes his resurgence. Elliot eventually agrees with Ray that life is not so much about control but stumbling from one thing to the next. Trying to correct yourself after each fall, until the next comes comes along.

…As Agent DiPierro stumbles upon the Coney Island arcade headquarters.

I guess Part 1 and Part 2 of the season premiere were the first 2 episodes, since they’re calling this episode 3. Just to make sure you’re keeping up.

After getting some, courtesy of that AIM conversation, Agent DiPierro has an epiphany and goes to retrieve that list she got from the crime scene. I didn’t get it. Why did it have her name on it? Why was that the ‘aha’ moment that convinced her to go back to Romero’s crib? Probably the only aspect of this episode that wasn’t 100% clear.

Dig some digging. Remember when they hurt my brain? The moving of money to “hot” and “cold” wallets. Is pretty realistic. In the crypto-currency ecosystem, “hot wallets” are essentially bitcoins that are accessible online, so you can spend them easily. “Cold” wallets are stored offline. A hot wallet is like the cash in your pocket, or hidden under your mattress, where it’s safe for the most part; a cold wallet is more like a safe deposit box at the bank, which is a much harder nut to crack. The things I do for you people…

More digging…Romero was a ‘Phreaker’ which were the hacker of his day…ya know, cuz he was old. Phreakers illegally avoided phone charges until computers became the technology to exploit. That’s why he was originally recruited by Mobley, because he was the phreakiest.

Ray got an enforcer though? What’s this cat up to…

Ray’s conversations with pretty much anyone have been hilarious and amazing.

Joey Bada$$ has been brilliant so far. This kid may be on to something.

“Control is about as real as a one-legged unicorn taking a leak at the end of a double rainbow.” 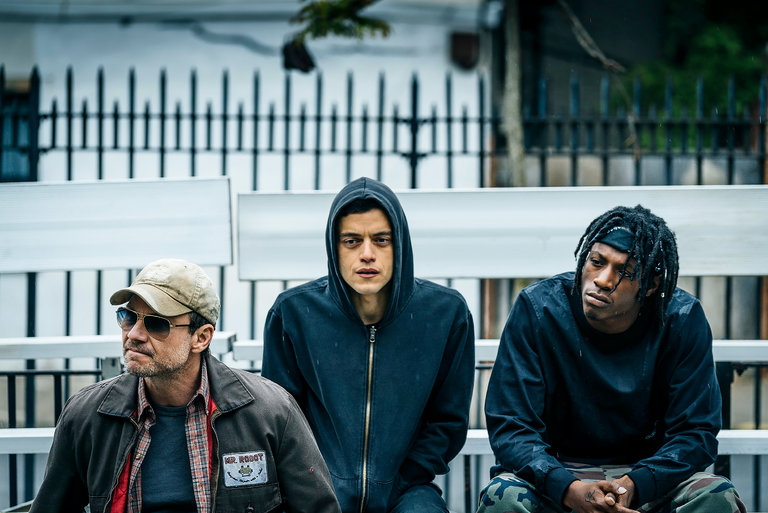