The title of this episode really explains it all. It’s time for a successor. Elliot is locked up, but the show must go on. In terms of Mr. Robot episodes, this one was tame AF, so I’ve decided to thug it out a bit with this recap.

Ayo we pop off wit the shook homie Mobley and hijab rockin Trenton meeting up at Ron’s Coffee. But real ones know dis shit a flashback cuz Ron is a despicable ass pedophile scumbag who ran a child pornography site and got the business when Elliot Da Hack GAWD found out about that grimy business. Darlene shows up and tells them what the plan is. And fsociety is born. 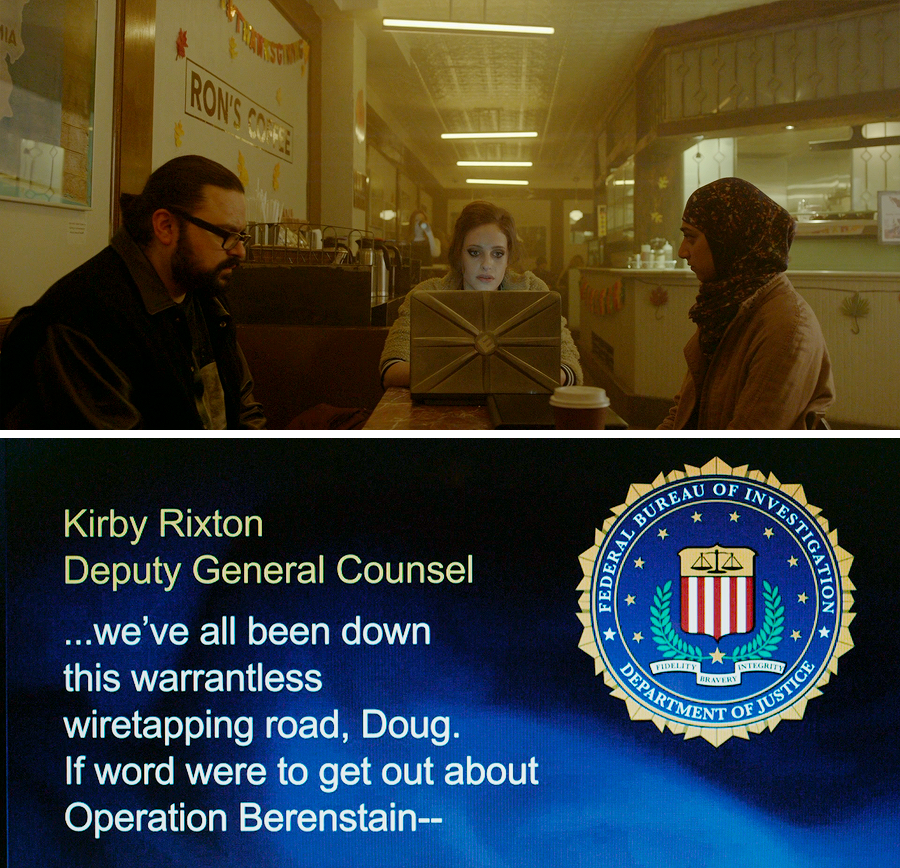 Back at Hacker HQ, Mobley is officially soft as Flubber, blubber and baby shit. He aint ride or die no more and is calling it fsociety quits. Too bad he makes his move when Susan Jacobs, the general counsel at E Corp returns to her apt and discovers the team in the midst of all their revolutionary shenanigans. Aint no other options than to lock her up. They throw the shackles on shorty and toss her in the pool room (Told you this mansion apt was ballin AF). Eventually Trenton goes to check on her so she can let ol girl drain the main fem vein…and when she cuts her loose for the bathroom break, Madame Executioner Bron Bron shoulder charges Trenton who dodges like a fuckin matador and Jacobs smashes her head into the wall. Yea, dat be a problem.

Darlene and the crew get into avoid shitstorm mode aka find some dirt on this woman who has seen every face and aspect of fsociety. They start scanning through emails and texts; they find nothing. But Holllll up! Trenton done stumbled across the yahoo login info written on a mafuckin Post-It note..a Post-It note fam! This show yo.. Amazing it can be so mind-blowing but always grounded wit real ass shit. Darlene pays the head smasha a visit. She tells her about the first time she saw her. It was in a courtroom and Darlene was but 4 years old when Madame Executioner cleared Evil Corp of all the murderous wrongdoing they committed. Jacobs out here pleading for a deal, asking Darlene if they can work something out. Darlene lets her know she’s already got it alllllll figured out. TASER TO THE HEART EVIL CORP PAWN!! Aaaaaaand then she falls into the pool and drowns to her chlorine death.

The team at a loss for words when she let’s them know the 411. Darlene out here acting like she didn’t hack Susan Jacobs’ life and medical records and know she had a heart condition that a taser would cause to malfunction something stoopit! But she knew..oh she knew!! Darlene gets back on her bully shit and dismisses Mobley and Trenton so her and Cisco can complete that full electronic and fingerprint wipe down. While waiting at the Bowery train station, Trenton and Mobley debate their next move. Trenton the type to voice her hate for Drake whenever the convo come up but be bumpin that shit on the low like, “Next move better than my last move”. It’s time for the hacker homies to run. 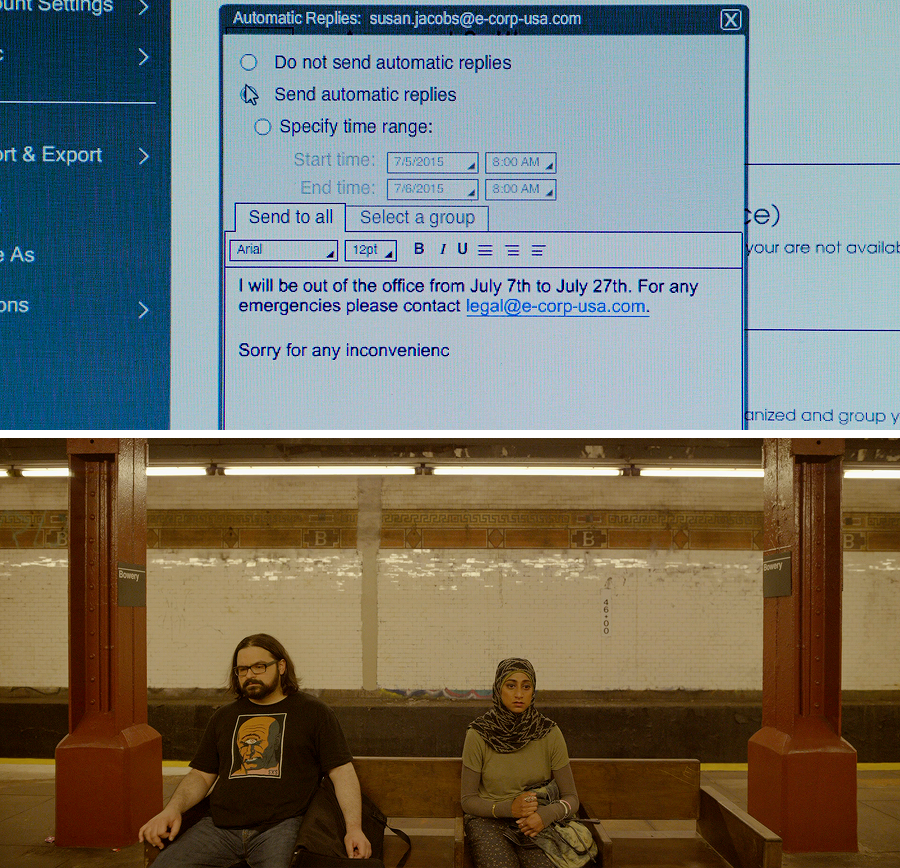 Darlene pulls off the bully mask and converts back to her convincing people to do things they should never do swag. This time Cisco is her right hand man as they go fishing for floating females then travel through the subways of NYC with a giant suitcase full of dead body. They pay off Darlene’s ASPCA morgue plug in ecoin dolla signs and stuff the body into the incinerator. While Cisco is traumatize by this ordeal, Darlene admits she feels pretty ok about the whole thing.

Agent DiPierro kept her Fed ass self busy this episode by questioning some cat who owned the gat that shot that bullet the FBI found at Coney Island Arcade Fire Hacker HQ. She offers him immunity in exchange for a name becoming a full blown bonafide rat. Iight so we ain’t find out if she gets one of the names of our OG revolutionary hackers, but Agent D Nice and her plot be thickening like porridge. Thickening like racial tensions around standing or putting your hand on your heart for the national anthem. Thickening like Teyana Taylor thighs in Kanye’s Fade video. Thickening li..OK I’m gonna stop now cuz dis shit gettin’ thick.

Mobley shook beyond belief to even walk in his apt. This mafuckin’ craven got a delivery boy scoping out the pad while he quivers across the street like a newborn deer left in in a blizzard.

Trenton, poor Trenton got into this game just so she could save her parents from their consumerism ass selves and now she’s resorted to simply salvaging any life for them, so she’s low key trying to get her dad to move.

Mobley digs deep down into that petrified soul of his and pulls up to his crib and not 2 mins later hears a knock at his door. It’s da boys. He bout to piss himself.

Trenton peeps a shady car drive down her block then scurt off.

FBI pull up in crazy numbers and threaten to knock down Mobley’s door. As soon as he opens up these Federal goons busy up in there and haul his jolly behind off to a familiar face. Agent DiPierro is blessed with questioning duties and breaks out the End of the World party flyer with DJ Mobley on it that she found at Romero’s crib. She asks for some sort of help and he..well.. Darlene wakes up in her boo’s apt. She hears the shower running and asks Cisco how long he’s been up.. then shorty gets some crazy whiff of betrayal and snoop hack attacks her man. Turns out Cisco sold Darlene ‘The Loose Cannon’ Alderson out to The Dark Army. Apparently they used her to plant the femtocell as a backdoor plan. Stage 2 is about to commence. Buuuuuuuttttttt not before Darlene takes a Lousiville slugger to Cisco’s money maker. Here’s another hit, Barry Bonds!

The Trenton and Mobley show ends with Mobley telling Trenton to meet him in the place they first met. Thanks to the opening flashback scene, we know exactly where that is. Funniest moment of the episode by far.. 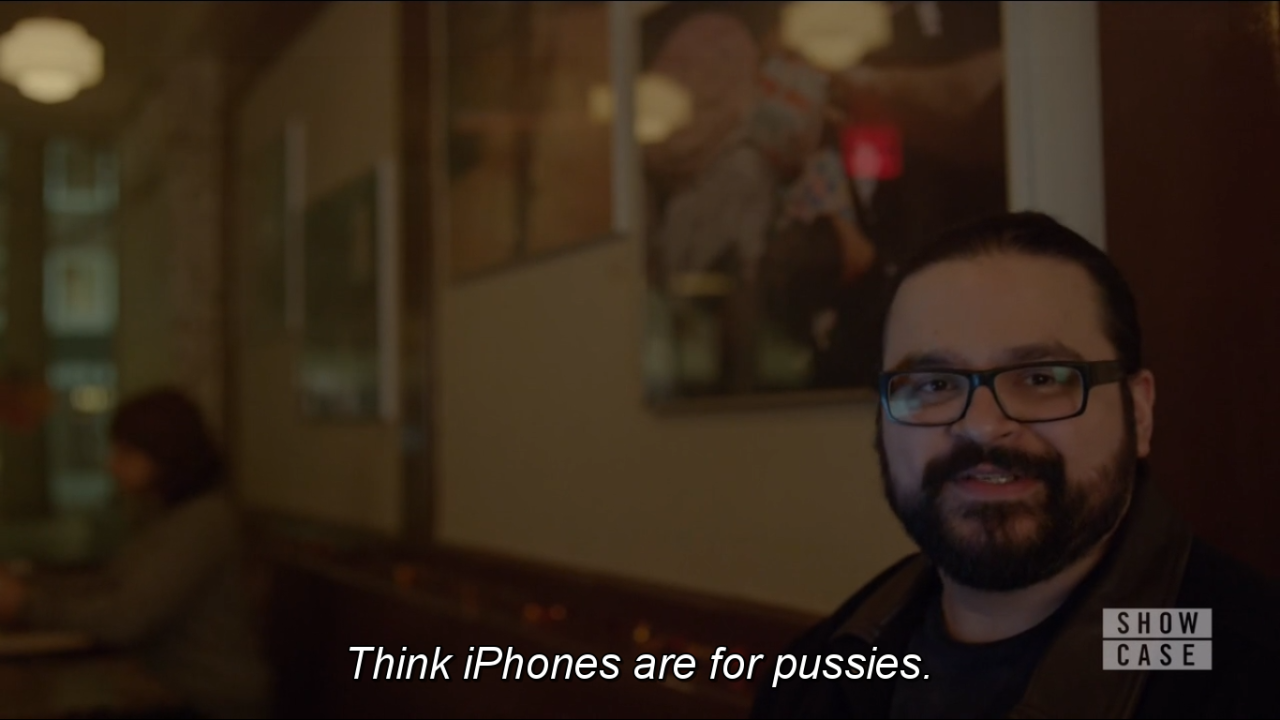 Behind closed doors, Agent D Nice was getting chewed out by her boss and was basically told her witch hunt is dead. The leaked conference call got the FBI in deep doo doo.