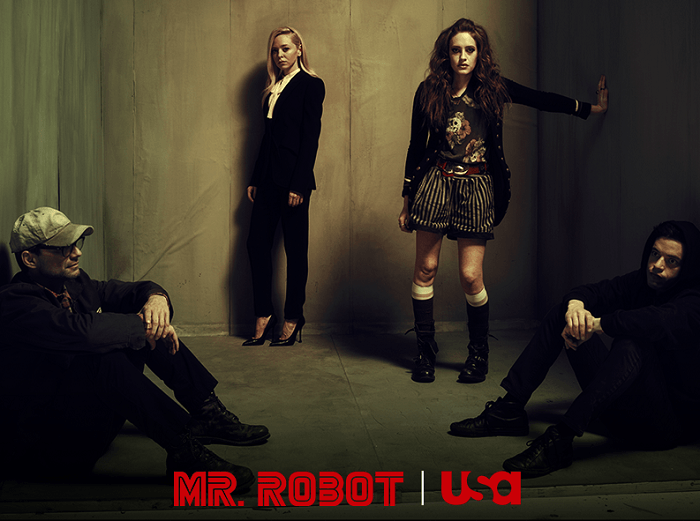 ***Spoilers for the Season Finale of Mr. Robot***

In a week that has conjured up all the frustrations and disdain proud Black Americans have felt since the world woke up to the all too common, unpunished and paid atrocities being committed across this (mainly) amazing country, I wake up nearly everyday resonating with Elliott, Darlene, Trenton, Mobley, Cisco, Angela, White Rose and Tyrell.

In the Season Finale of Mr. Robot, we get the appropriate antithesis of a happy ending for the friends and hackers we’ve grown to know and love over the last two summers. We see every thread of uncertain actions, possible death and impending revolution get sewn up tighter than a Wu Tang torture victim. Over the course of this top notch second season we witnessed the “death” of Tyrell Wellick, Angela turn into a tech savvy supporter of anarchy, Darlene assume the role of upheaval Commander in Chief, White Rose emerge as the head of this history making leviathan, Trenton and Mobley go into hiding, Cisco become the target of some bad ass killer-instinct-having cats from China, Joanna pull strings and remain afloat in this world of piranha, Phillip Price place his last power play card on the table, and Elliott go to jail and be released in a suspiciously short 3 month time span. Just a snapshot of the 90’s sitcom inspired, dissociative disorder laced, brass bull balls hurling, black market servicing show that keeps Hulk smashing cinematic barriers and Deadpool defying racial and cultural expectations like something we’ve never seen before. Sam Esmail and Malek Rami, we are not worthy.

[quote_simple]Sidebar: Congratulations to Malek Rami on his huge Emmy win for best actor!![/quote_simple] Our finale starts off with the man responsible for 90% of the Mr. Robot fandom, Elliott Alderson out in Coney Island (or some small amusement park) debating and challenging the notion that Tyrell Wellick is indeed alive, hasn’t been wacked by Mr. Robot, and spittin’ the most out of this world bro love speech. He droppin’ bars from his father’s favorite poem. He reveals his deepest insecurities. He gettin’ all this shrink time on the low. He loves Elliot so much, but their relationship will always be. 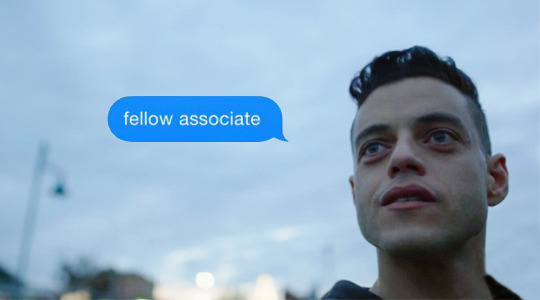 Meanwhile, in a bland as rice looking interrogation room we find Dom in the thick of things surrounding the Dark Army and fsociety. We also find out who fell victim to the Suzuki gangsta shooting at Lupe’s. Turns out the homegirl Darlene is very much alive. Well, she is now. Especially after seeing the love of her life get his top blown off and have his brain bits and blood splatter all over her person. Most would not have made it out of that situation with a shred of mental stability. But Darlene Alderson? Darlene, I been holding shit down since they said took my father away from us, Alderson got her Fuck It Gun locked and loaded with 16 rose gold plated Dave Chappelle “I plead the FIFFFF” bullets just waiting for a FBI agent to test her gangsta! But she aint ever go up against an animal the likes of Dom DiPierro. Agent D Nice dismisses her partner after he tries to come hard. Swing and a miss! 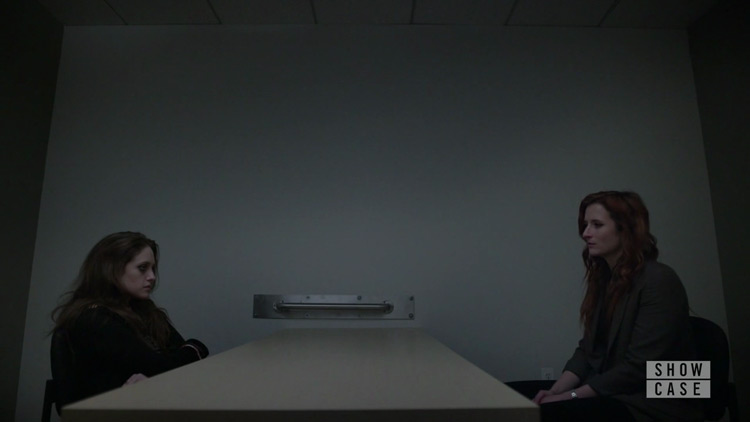 Dom hits Darlene with all her best coercive shots. Left jab, jab. “I thought your brass balls stint in DC was kinda funny.” “I know it’s tough to have your man murdered before your eyes.” “We’re more alike than you know, we should work together on this.” Right hook. Wait what is this? Could Darlene still be standing? Oh she does Dom one better and goes on the offensive! She hits Dom with a mean shot to the jaw like, That was a cute little act you just pulled playing the nice cop but check me out sister. There’s no way I’m not going to incriminate myself. For every question you happen to have, the one and infinite response I have for you is, “Suck it”.

Joanna ends her season with one of the most drastic scenes this show has ever given us. She goes to the apt that Elliot located for her, and the man who answers the door is none other than evil ass Evil Corp CTO, Scott Knowles. Ol Scotty is a wreck. Looks like his home has been invaded by Breaking Bad blue sky users. Joanna calls him out on his creepy ways and he breaks down. Son starts blubbering like every sappy soul who ever watched Titanic. Joanna, the slithering seductress that she is, goes in for the strike and lands a life shattering venom bomb along the lines of, “You pussy. You piece of shit. I hope you rot in hell with your wife,” she snarls. “Fuck her and her fetus corpse.”

Scott Knowles blacks. From the choke hold that Joanna still has the audacity to talk shit through!! To the half a dozen or more UFC ground and pound shots!! Joanna is a walking talking methodical BEAST. Bravo young lady, bravo. The setup game was too real.

Wellick decides to show Elliott where he has been all this time and prove that he is in fact as real as the “God” said he is. They pull up to some bummy ass apt with nothing but the bare essentials. Bed and computer (They got that good WiFi doe). A place to sleep and a place to coordinate the 2nd greatest hack in human history. Elliot wonders if he’s the one that’s been sleeping here during his blackout periods. He wonders what this phase 2 is all about. Then Tyrell shows him exactly what it’s all about. E Corp. Is all about finishing what they started and taking down E Corp from the ground up..literally. Phase 2 is centered around blueprints and backup data. Blueprints that Elliott gathered for White Rose and the anarchy squad, unbeknownst to him. Remember the femtocell that Elliott and Darlene had Angela plant? Yeah that bad boy has given the homies the layout so they can take matters into their own hands and casually destroy all the backup paper information that Evil Corp has been collecting, moving and storing into the Manhattan building that is now in the possession of the world’s greatest hackers. Elliot wonders what they plan on doing with this heavy ammunition and Tyrell keeps it a buck with our boy. Dark Army, fsociety, Tyrell, and Mr. Robot ALL planned to blow up that building, the hundreds of employees that may or may not wind up as terroristic collateral damage, and every shred of physical backup data.

“I don’t know what’s gotten into you. We’re supposed to be gods together, yet you want to destroy our destiny? You’re not making sense.”
-Tyrell

But could it be? Has Elliott Alderson recently developed the part of his brain that has a conscience? If you thought yes, you clearly haven’t been watching this show since day 1, or you’re a bit forgetful. No, Elliot has always had a very good and caring conscience, it just so happens the homie gets controlled by the illest ventriloquist in the game since Geppetto. But that Jim Gordon version of Elliot? That White Knight on keyboard? That sommbitch wants nothing but to stop the most diabolical bastards out there preying on the weak and save the world before the next next season of Game of Thrones drops. He begins to try and find out way to stop phase 2 from happening but Tyrell Wellick didn’t give up his freak nasty yet gorgeous wife to be just another fired E Corp exec, nah he’s playing for keeps. He pulls out the burner and keeps Elliot from stopping the plan “he” set in motion by lodging a red hot slug into the belly of the most unreliable narrator in television history. Hey, Elliot..I think Tyrell is real and very much alive. Thanks a lot Mr. Robot.

Well, it was a great bout ladies, but it’s times to unleash the Dom beast. She decides to pull out her trump card. She walked Darlene through the flickering lights building of hundreds of officers and agents that have been assigned to this case, all so she could show Darlene the classic agent/detective spider web of criminal activity since 5/9 blew up all norms, essentially telling Darlene that the investigation is already over and she’s figured out who every single person who’s been involved with them from day 1. Literally AYEBODY up on the wall, including Tyrell Wellick and Elliot Alderson smack dab (yes, I just hit a quick dab while riding the train) in the center of it all.

Who was the one and only call that Tyrell makes after shooting their confused fearless leader? No one but the only person Elliot has ever felt an intimate connection to, Angela Moss, who has clearly and truly become Angie from da block! The Dark Army’s newest operative puts Tyrell’s worries to bed and tells him she’s on the way because she should be the first face that he sees when he wakes up from his bullet hole slumber. AND THEN THE LIGHTS GO DARK. Phase 2 commencing. End season. Can I get a Ric Flair “WWWWWWWWOOOOOOOOOOOOOOOO!!!!!!!!”

Esmail, you dastardly fiend, you have left us with just as many questions as the answers you just gave us!

Did Tyrell have Angela’s number? Did Angela know to call Tyrell?

How deep is Angela into this Dark Army life?

What did White Rose say to convince her that she needed to go THIS deep and not just give up her silly plan to self-snitch?

Angela is definitely going to turn on Philip Price and E Corp or White Rose and Dark Army.

I’ve been avoiding this Red Wheel Barrow Easter Egg that keeps popping up. I don’t know what to make of it. Noticed it a couple times but made nothing of it..until now.

Trenton and Mobley hiding out in Fry’s Electronics parking lot like an bunch of average Joes in Witness? If you listened up, you heard Trent Dizzle sans head scraf saying. “If what I discovered is real, do you know what that means?,” she tells Mobley, “It means we could potentially undo this whole thing; put everything the way it was.” Really? After all this? you really think you’re gonn..oh yeah that’s right. (see below)

THE HOMIE LEON IS BACK BABY!! Here to guide Trenton and Mobley right back to the hacking promise land.

That Cadillac creeping through the parking lot towards Trenton and Mobley tho?! That’s got White Rose written all over it.

Dark Army is just absorbing all the remaining fsociety members. Should make for a spicy season 3!