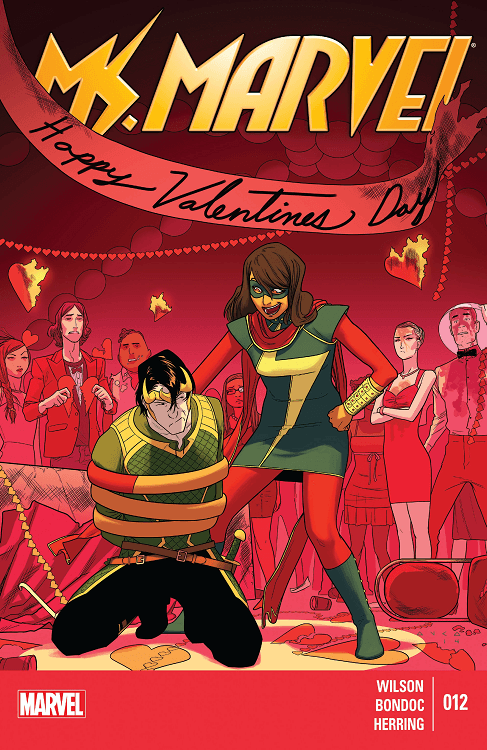 Well, it’s officially been a year since Marvel introduced their first Muslim feature superhero, Kamala “Ms. Marvel” Khan. From the first issue, G. Willow Wilson stole our hearts and left us with “embiggened” smiles from ear to ear. This is basically the flagship title in Marvel’s (and really, the industry as a whole) movement towards making the market a more diverse, inclusive one. A super-eager brown girl defending her neighborhood against the baddies of New Jersey while battling insecurity, the pitfalls of high school and putting her dreams ahead of family tradition? What else could you possibly want?

In this installment, it’s Valentine’s Day, love is in the air and the big school dance is coming up. In the wake of Kamala’s latest battle with the Inventor, the All Mother of Asgard senses all is still not right. So, she’s dispatched Loki to Jersey City to sniff out any of the Inventor’s remaining agents. Of course, this causes complications for Kamala, whose never even been to a dance before. This is a mainly hilarious outing that seems to have equal, well paced doses of all the right elements, conspiring to make this a very entertaining one shot akin to a standalone episode of your favorite sitcom. Comedy, teenage pathos, unrequited love and Loki in rare form. Wilson leaves no real downside to complain about plotwise this week. As far as art goes, Elmo Bondoc isn’t exactly flawless here, but still manages to do a serviceable job of adhering to the aesthetic Adrian Alphona’s started us off with.

There are a couple of uneven faces and expressions that could stand to be just a bit clearer in a couple of panels, but for the most part, the visuals are still up to snuff. All in all, it’s not broken and the creative team isn’t fixing it. The great things about this book have worked for a year thus far. May they keep working and may the millenials of Jersey City sleep well with Black Nerd Problems’ adopted little sister watching over them.

Bottom Line: If ever there were a book that needs to never change, it’s this one. Even when there’s not a long winding plot line, these standalone stories are gold. 9 out of 10