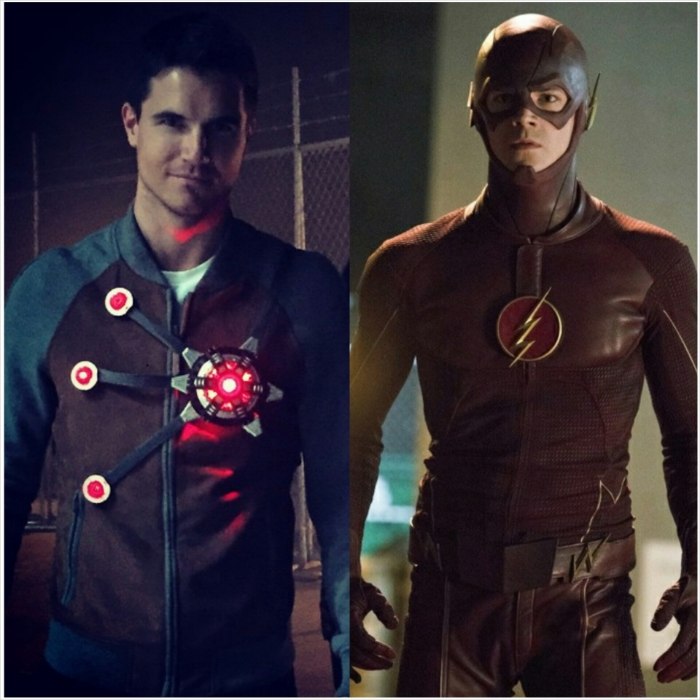 Man listen, we done praised The Flash heavy on this site. We done told you how they been leading the way with *unrolls the list*

[check_list][icon_check]Representation being done the right way on on TV.
[icon_check]Patrick Sabongui as Police Captain Singh that identifies as gay.
[icon_check]Joe West as the new bar for father figures[/check_list]

After the showing of the episode titled “Fallout” it felt like we saw a new era take over for TV comic adaptations. Arrow‘s debut brought us the gritty street level vigilante (Arrow probably owes Batman royalties for borrowing so many villains). However they’ve been very Chris Nolan serious in their approach to take on the character. The drama has been heavy but there was ALWAYS the fantastic fight scenes / choreography that were the life savers for episodes. Let’s say that Arrow represents the modern / bronze age of comics with things being very heavy and dark. Ollie was straight up killing cats when he came on the scene, Deathstroke came out and made it seem like a motion picture with how he was taking it to Starling City. Shit was crazy.

The Flash’s approach has been the completely opposite. We’ve seen a more light hearted approach that doesn’t focus entirely on drama, rather divvying up the action and drama, but also using humor as a key element in the show as well. The Flash has so much more freedom with which direction to move as a result of this. Science also plays a huge factor on the show as well. Through humor, drama, science and the perfect balance of CGI, we’ve been witness to the birth of something that wasn’t possible years ago or let’s say, hasn’t been executed to such a high standard. The Flash is able to take obscure characters like Firestorm and make them work on screen in live action.

It really doesn’t just stop here. We’ve also seen Gorilla Grodd via easter eggs and also in the (cgi) flesh on the show. This is one of the Flash’s more renowned adversaries from the comics. It’s a freaking telepathic Gorilla. Trust, I know how it sounds on reading this. However, through the appearances he’s made so far? Grodd is not a joke in the least bit. I’m sure the the show is going to have an issue with PETA but that’s beside the point. This show is really on some Kevin Garnett shit because it feels like, “ANYTHING IS POSSIiiiiBLEEEEEEE”. Seriously, imagine the show runners pitching this shit to The CW.

Rep from The Flash: *jumps on desk*–Then we got this guy Firestorm, right? He’s going to have his head and hands on fucking fire. I’m talkin Prince Zuko Fire Nation flames! Shit gonna to be crazy. But we ain’t done, we got this telepathic CGI Gorilla. Yeah. You heard me, a fucking telepathic Gorilla is going to be a villain on this show. WHO ELSE GOT A GORILLA AS A FUCKING VILLAIN IN THE GAME?!? Nobody! Thats what The Flash does we do the shit they can’t do. THEY BOUT TO HATE US CAUSE THEY AIN’T US. We’re the cure to the obscure baby.
The CW:…

[divider type=”space_thin”]
We’ve witnessed The Flash take the The Silver Age of Comics, (an age where Barry Allen flourished) adapt that for the modern audience, and pull off, to me, what feels like the greatest homage we done ever seen. I’m sorry (no, I’m not) but Smallville’s reign is over. This is the shit the cyber streets been waiting on. This that Superhero Detox album. I’m also being led to believe we’re eventually going to see The Green Lantern (probably Hal) with the mentioning of Coast City on Arrow, as well as on The Flash in addition to having seen Ferris Air (who Hal flew for).

If this is the case I feel certain that this show would finally be able to do Green Lantern (GL) justice in live action (shout out to Green Lantern: The Animated Series for holding it down in cartoons), which would be incredible to see. I’m not trying to jump the gun here, I’m mostly using GL as an example of a not so far fetched possibility to appear on the show due to the formula they’ve used in creating their characters thus far. We know it’s been rumored that the Atom will debut his shrinking abilities on The Flash and also likely to appear on Arrow as well. The Flash is the show that’s getting the sci-fi heroes justice on screen. They’re able to introduce heroes that aren’t house hold names and give them legitimacy in a live actions series which always feels damn near impossible in execution, however, the beauty of this show is that when it comes to the impossible, well…