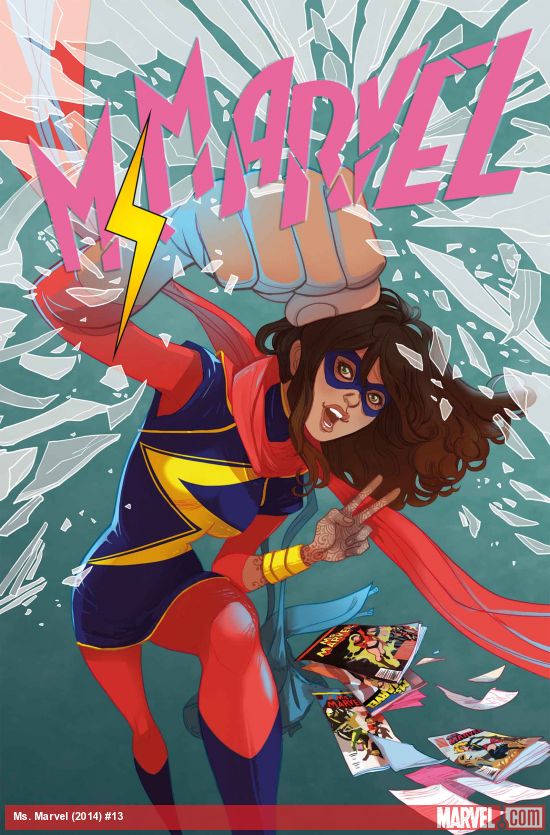 AND YOU SAY JERSEY CITY! Kamala Khan is fresh off the win against The Inventor and reinventing her damn self. She out on New Attilian getting her Inhuman Danger Room sessions on in order to expand her skill set. The girl is getting the hand to hand game up and Queen Medusa approves. She confesses to Lockjaw that she wishes Kamala was more open to help from her since she fears her being influenced by others ideologically speaking (FORESHADOWING). Medusa Knows Kamala is strong physically but she expressing a lot of concerns that it’ll take more than muscle for whats coming. 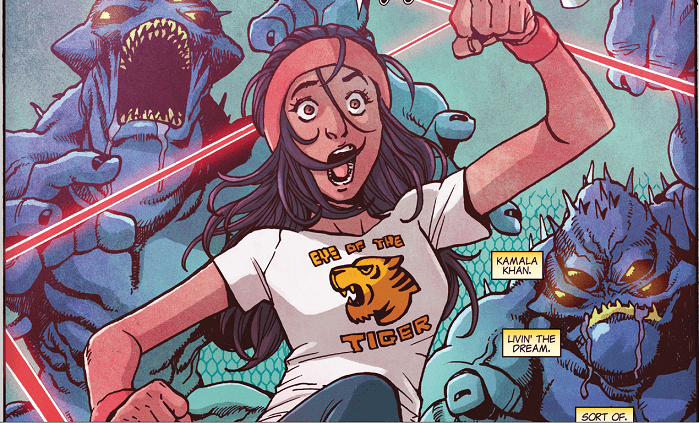 Back home we see Kamala reunite with a childhood acquaintance Kamran who she only remembers as a 5 year old that picked his nose. He comes to visit with his parents (Kamala’s parents are good friends with his) and her tune changes from wanting to tell this dude, “Bye Felicia” to trying to get his gamer tag once she finds out he is into the same video games and Bollywood movies as well. Even her father is taken aback because he wasn’t expecting this. They go out for DVDs together with Kamal’s brother who plays third wheel and defensive linemen against all lead up to hand holding. It’s all good until a new villain on the scene comes up in the streets taking bout she run Jersey city now. Kamala does a quick costume change and faces off against this girl calling herself Kaboom (she has electrical powers). Come to find out she is an Inhuman and part of a crew that’s trying to run these streets and put the humans under lock and key.

You know how Kamala get in the face of any oppression. The girl gets a chidori to the face from Kaboom and returns the favor via Monkey D. Luffy’s “Elephant Gun” aka Embiggen Fist attack. 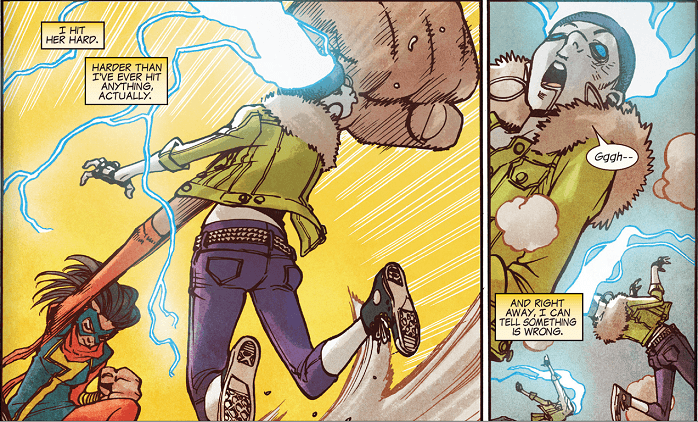 Kamala says to Kaboom, “Here comes the Boom” and she was not ready. Kamala ducks out the back alley but is seen by Kamran who lets her know they both got something in common and he ain’t talking Bollywood appreciation no more. Listen, G. Willow Wilson continues to give us the queen of the fan girls in supreme light. This is a fun issue as we see a new possible love interest for Kamala that will surely end up with Bruno being thrown into the mix for a love triangle. Miyazawa’s art is smooth as fuck and totally captures the look and feel of the Kamala down to the detail. The art has her going from fan girl to hero real quick which is such a great divide to the two aspects of who she is. Don’t even get me started on the depictions of her swoons when she first saw Kamran. I’m hoping Miyazawa stays on for a prolonged period because I’m so grateful for his interpretations visually for this issue.