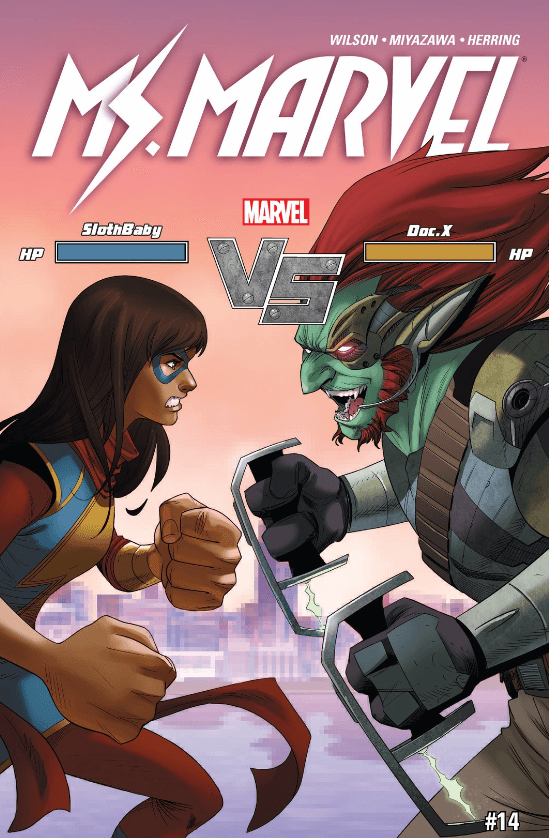 With this issue, #14, we are back at the top of a small story arc, watching Kamala continue to manage her new life, a life without Bruno and without Captain Marvel as her ever-available backup plans. The events of the last many months finds our girl with solitude pushed on to her… at least that’s what she thinks.

Tyesha is Kamala’s sister in law and she’s a great addition to the back-up crew of Kamala’s life, taking over for Kamala’s mom in the “you know, awesome is right in front of you, right?” role. But in typical all-of-us-ever fashion, Kamala has to ignore that awesome for an issue or two before realizing how right Tyesha is. This is one of the endearing things about Kamala — and most of the current crop of teen-ish Marvel superheroes — she’s real. She does stuff you or I would do. Dumb stuff. Like tracking down an online stalker by herself, only to discover when she finds that stalker’s home IP address and goes to visit him, that the fact that she’s found him says more about her (and her secret identity) than it does about who he actually is. 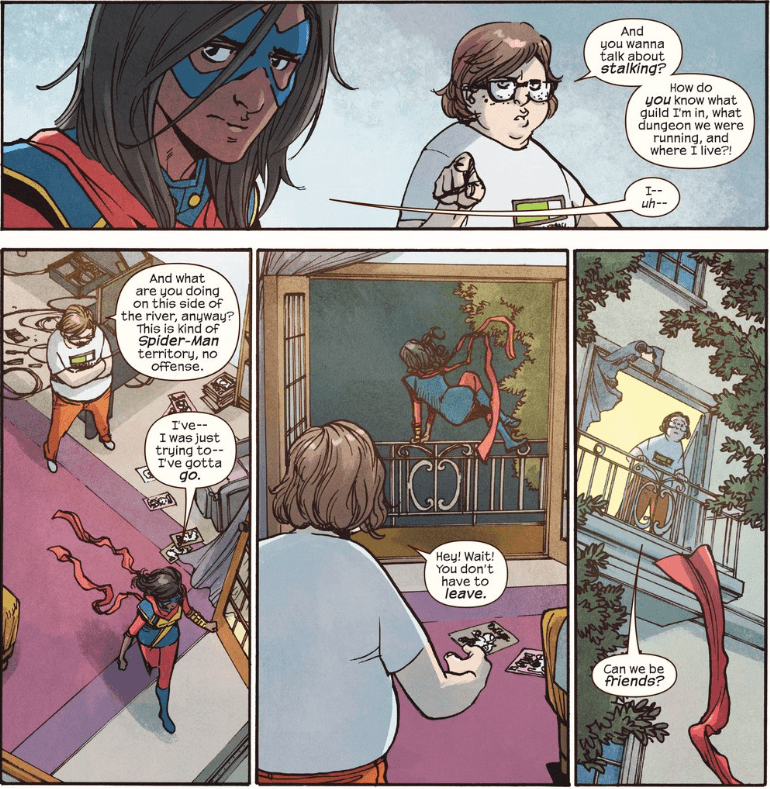 Wilson and crew have perfected the short stories within a larger story framework of comic book story telling. This comic is nothing if not consistent in both quality and appearance. It is reliably good. In a world with new comics on offer every week, it is great to have a few of these reliable stories to come back to. At the same time, it doesn’t fall into a cheesy “lesson of the month” style. You know Kamala has to learn something, and you probably guess what that something is, but it is never predictable or flat.

This is a mystery issue, as Kamala finds that, in her isolation, the world is more threatening than ever. The villain reveals himself in a particularly creepy fashion and we’re left hanging with our girl, feeling the isolation she’s talked about. Next issue, the suspense will deepen and we’ll learn more about our bad guy, and about the kind of person Kamala is trying to become.

I’d like to add here my personal plea for a Ms. Marvel/Black Panther crossover issue. She guest-stars in comics all over the place — she kicked off The Unstoppable Wasp last week — so it only makes sense that Black Panther could drop by. Or she could go to Wakanda to visit Bruno. I don’t know, but Wilson can make it make sense. Come on… for the culture!

Reading Ms. Marvel? Catch up on previous reviews of the series here.