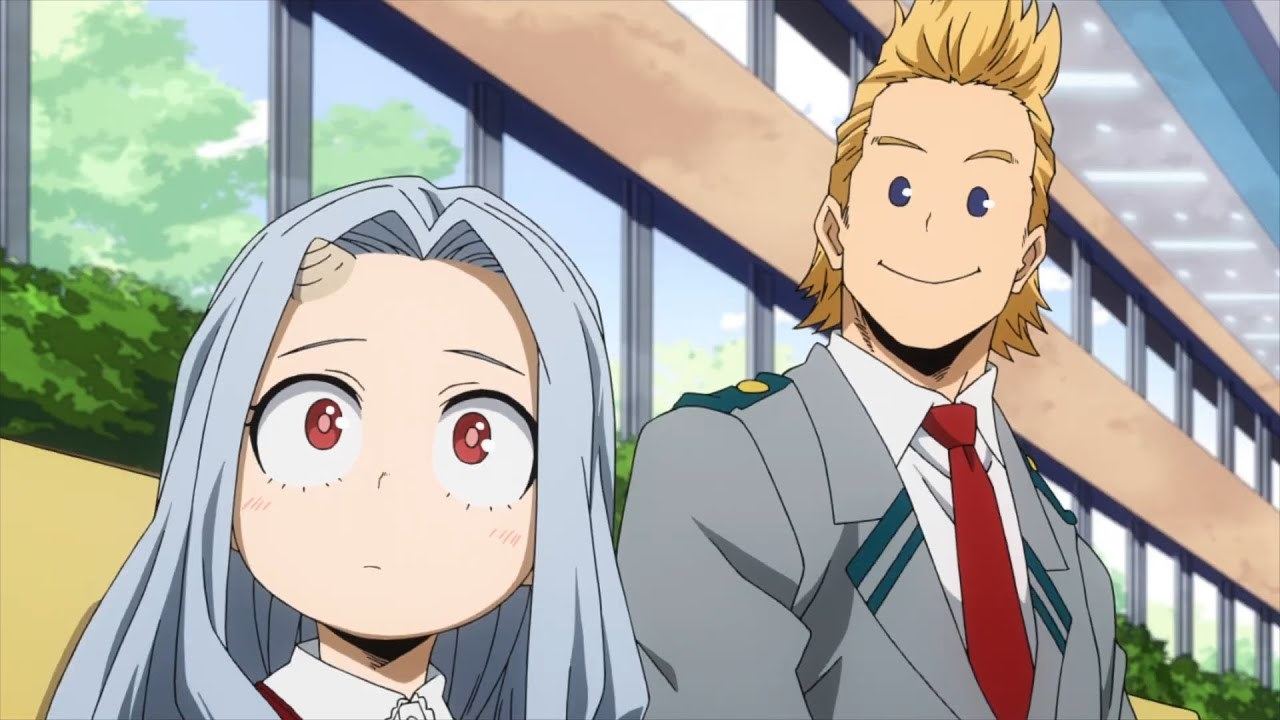 Given that everyone in Class 1-A has had to deal with at least villain attacks (some certainly more often than others) and have done so with a fair degree of confidence and levelheadedness, it’s easy to forget that they are still just a bunch of teenagers. “Gold Tips Imperial” continues the School Festival by reminding us of this simple fact: that despite the maturity they have constantly shown in life-threatening situations, they’re still kids.

It’s Saturday at UA, and Jiro is leading the Band Team, the effects teams are expanding their vision for the performance, and Ashido is trying to get the dance team to pop and lock. Of course, nothing ever goes according to plan because there are some unexpected guests. 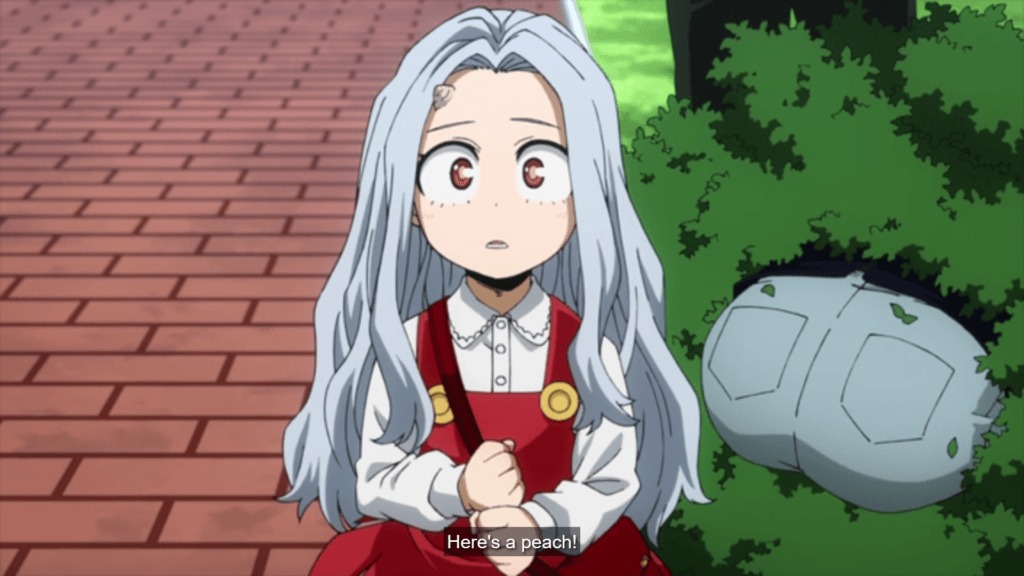 Yeah, out of list of images I imagined seeing in My Hero Academia, Mirio posturing while presenting a school girl Eri certainly was not one of them. Unexpected bodily representations of fruit aside, it turns out that Principle Nezuku has approved Eri’s visitation to the school, but he wants to get her acclimated to the place before the full sensory overload of the School Festival. All of the work study students are ecstatic to see Eri out and about, and the rest of Class 1-A welcomes her with open arms. Everyone decides to take five so Deku and Mirio can show Eri around the school.

Mirio explains the festival and dorm system to Eri, while also getting stopped by some of his former classmates who see Eri and immediately ask if she’s his daughter (a question Mirio awkwardly does not answer). Seeing all of the students prep for the festival brings back [insert adjective of your choice] memories of high school, with all the construction and planning. Our touring trio runs into Class 1-B who are also putting on a show: Romeo and Juliet and the Prisoner of Azakaban: The Return of the King.

There is something very appropriate about the hero’s whose quirk is copying other quirks straight up throwing three different stories into a blender and calling it completely original. 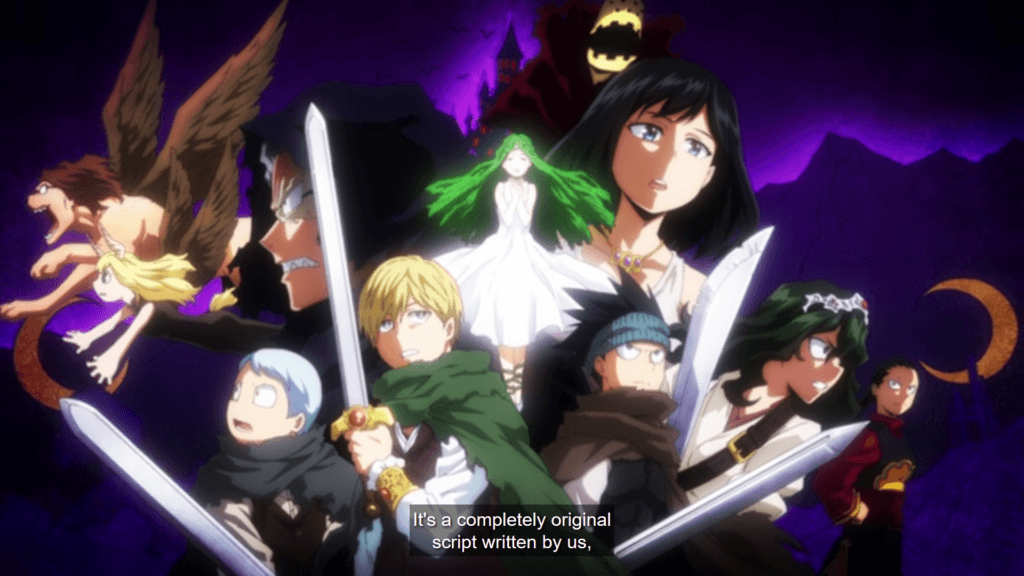 Up next is a visit to fellow Big Three Member, Nejire Hado, who is currently preparing for the Beauty Pageant that Aizawa did not inform Class 1-A about. Nejire Hado was last year’s runner up, and she’s looking to take the title her senior year. Both Midoriya and Eri are impressed for drastically different reasons. Tamaki’s also there for emotional support and some self-deprecating comedy.

Next up is the Development Studio with the Support Class and our favorite inventor, Mei Hatsume. She is very much working on so many different projects and said projects are also still prone to unexpected, inexplicable explosions 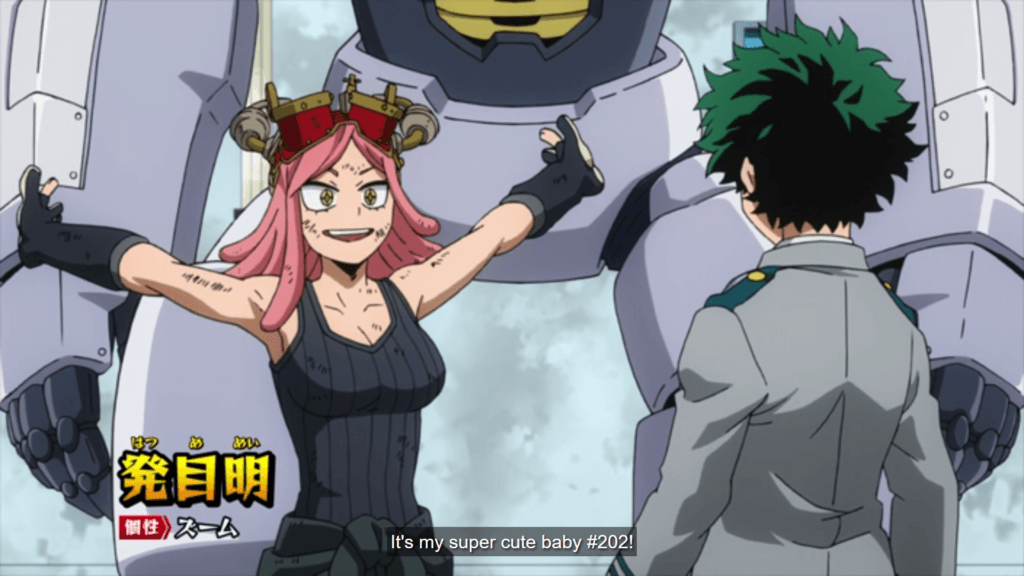 The trio gets lunch and Midoriya learns that Principle Nezuku had to use a lot of their clout to hold the school festival since UA is a high-profile villain target and Japan is without its Number 1 Hero. This only motivates Midoriya even more to make sure Eri has a great experience at the festival, and he goes off to meet up with the dance team only to find that he’s been co-opted by the special effects team who need something strong to carry Aoyama. Midoriya’s disappointed at first, but realizes that Eri will still see him dance at the beginning and making sure the show is memorable is the goal of the entire group.

Afterwards, he heads to train with All Might to try and utilize his air blasts more effectively which ends up just mirroring their first interactions with All Might’s intuitive grasp of All for One making him a less than ideal teacher for Midoriya. Still, neither is discouraged. Mei then crashes the party as she’s testing out another one of her babies and lets Midoriya know that she’s also found the time to work on some new equipment. This also unearths some expected news for the fanboy in Midoriya as he discovers that his idol used support items.

Back at the dorms, the students are chilling and when Uraraka’s just trying to bring him some Gold Tips Imperial Black Tea, she sees Midoriya in full goblin mode: on the intensive google search life, trying to find any visual evidence on the fifth page of results. 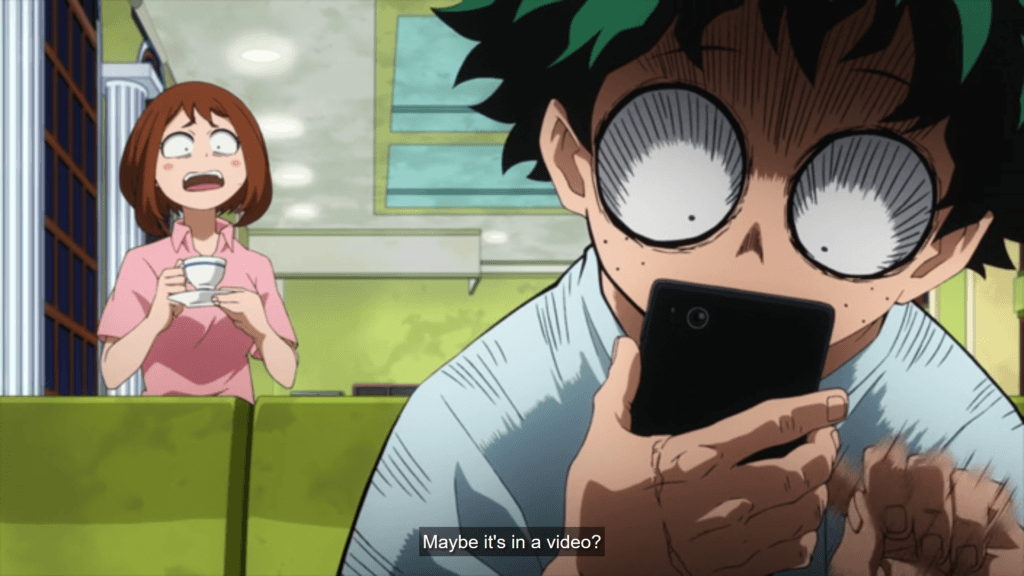 Of course while he’s doing this, he stumbles upon one of Gentle’s videos, and there is an unease that fills the air. Which is justified as the scene shifts to Gentle and La Brava. See Gentle is a villainous content creator with a penchant for tea, but he’s very much got a plan to infiltrate UA and make sure he has time to partake in the titular Gold Tips Imperials. He knows the path he’s gonna take, the tea shop he’s gonna stop at, the means to bypass security. And that’s gonna be a problem since if there’s even a hint of trouble the school festival’s gonna get canceled and after everyone’s hard work, that’d just crush morale and Eri’s heart, and we can’t have that…

The episodes ends in proper by giving us a little bit of insight into the back of Gentle and La Brava. They are certainly an odd couple, but you can tell they have their convictions and if nothing else, that makes them a different type of dangerous than anything we’ve seen in the My Hero Academia universe thus far.