I very clearly remember the one random weekend in February 2017 when I stumbled upon the first season of Castlevania. In its incredibly brief four-episode run, I was absolutely floored by the beautifully stylized animation, the sharp writing, and deep lore of the series. It endeared itself to me because of how well it respected and elevated the source material and I was dying for more. The second season lived up to the promise.

With double the episodes, the sophomore effort continued to show the endeavors of Trevor Belmont, Sypha Belnades, and Adrian “Alucard” Fahrenheit Ţepeş as they bring the fight to Dracula, but also provided ample political intrigue in Dracula’s court itself, where we saw vampires and human cohorts engage in deceptions and various power plays with both storylines colliding in an exceedingly memorable finale. But just because the Big Bad is gone doesn’t mean the story is over. And I am very happy to say that the third season of Castlevania boasts an incredible ten episodes run that continues to live up to the promise that the first season made. 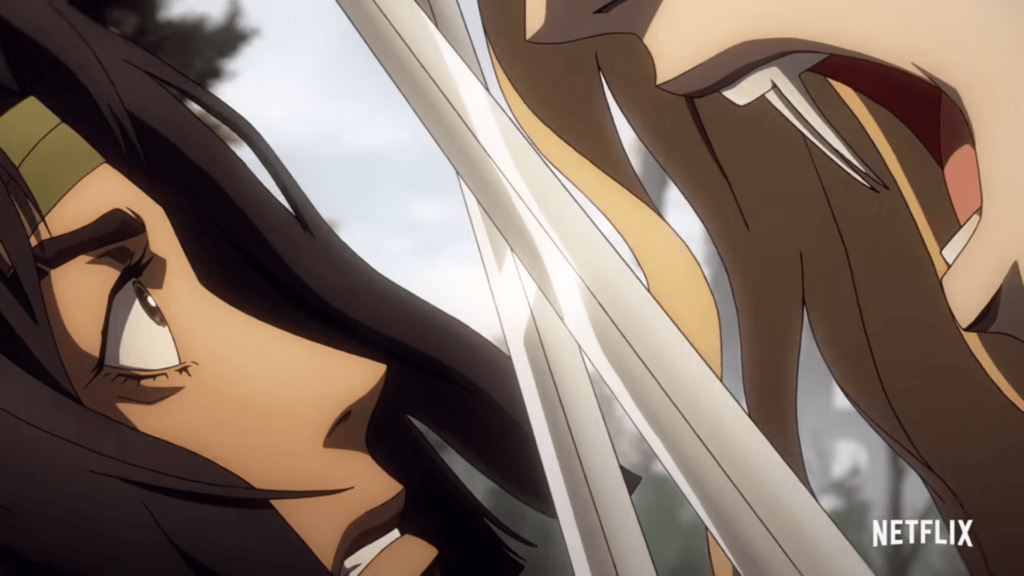 With Dracula’s castle relocated on top of the Belmont archives, the season begins with Alucard in exile. The idyllic forest scenery is juxtaposed against the foreboding architecture, and as the Trevor Morris’s orchestral scores plays, there is a slow realization that this season will be unlike its predecessors. It’s a slower burn of a story, told in vignettes that slowly show the aftermath of Dracula’s defeat and the wider scope of the world and it’s very much wonderful.

Within the first two episode, we see that Trevor and Sypha have taken a wagon and are traveling the country roads fighting night beasts before finding themselves in the mysterious town of Lindenfeld, Carmilla has successfully taken the forgemaster Hector to Styria, and the other forgemaster Isaac is trying to find his way home after being tossed through a magical mirror. These four different perspectives create the foundation for season three, and open up the mythology of the world in incredibly exciting ways. 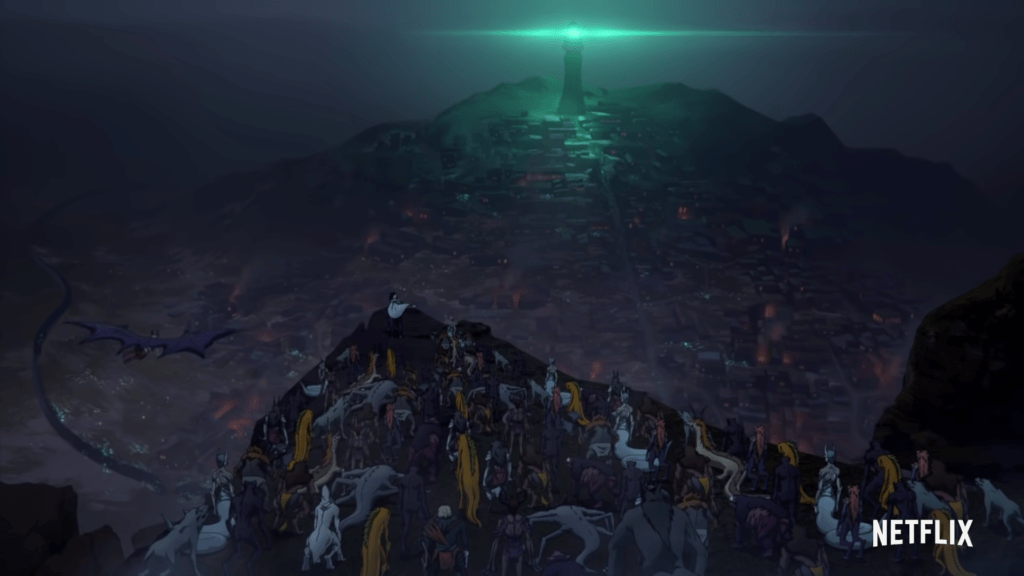 While the juggling of four storylines could potentially stilt the narrative, Castlevania strikes that delicate balance perfectly. Warren Ellis, writer of the series, and directors Sam Deats, Adam Deats, and Spencer Wan have this uncanny ability to provide just the right amount of exposition for a particular thread before cutting to the next vignette. The layered storytelling is engaging because it continues to escalate and build on the world. Now that’s not to say that the plot is perfect. Unlike the definite arcs in seasons one and two, seasons three feels a little more meandering and open-ended and feels like it’s designed to transition into (the almost certain to happen because this series in such a gem) season four.

To the merit of Castlevania, even as an extended world-building exercise, everything about the series is executed to perfection. The animation is still crisp and beautiful. The action scenes, while seemingly not as frequent as in previous seasons, are still a visual spectacle that gets the heart pumping. The writing deftly mixes in drama, sardonic comedy, and even some sultry seductiveness (admittedly new to the series, but it serves a purpose) and the performances are impeccable.

James Callis’s Alucard has a distinct aura of tragedy and guilt, and the lonesome scholar in self-imposed exile is a different type of tragic than his father, but equally impactful. Richard Armitage’s Trevor Belmont and Alejandra Reynoso’s Sypha have an undeniable chemistry that helps sell their arc. Adetokumboh M’Cormack is given ample opportunity to shine and further develop the dark depths of Isaac, and Theo James as Hector continues to portray a pitiful, yet powerful scholar who is seeking comfort after having lost everything. And this is just the cast that you’re already familiar with. Season three also adds the familiar voices of genre talent like Bill Nighy, Jason Isaacs, and Lance Reddick in key roles, and rounds out the cast with Jessica Brown Findlay, Yasmine Al Massri, Ivana Milicevic, Navid Negahban, Toru Uchikado, Rila Fukushima, and Barbara Steele. And everyone gives an incredible performance and helps tell this complex tale of geopolitical intrigue and vampires. 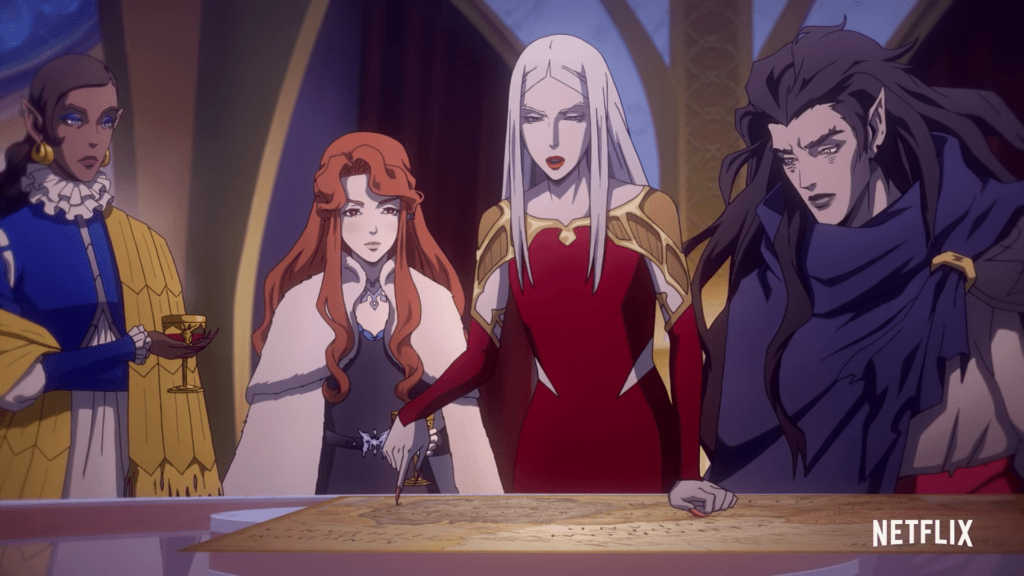 Castlevania is truly a shining example of what a video game adaptation should aspire to be. It has a deep respect for the source material, while also having a fun time pointing out some of the more ridiculous elements of the series. The production of the series, between the acting, writing, directing, animation, and music, is superb and if you’re a fan, clear your schedule on March 5th so you can see the evolution of one of the finest horror sagas of the modern era. 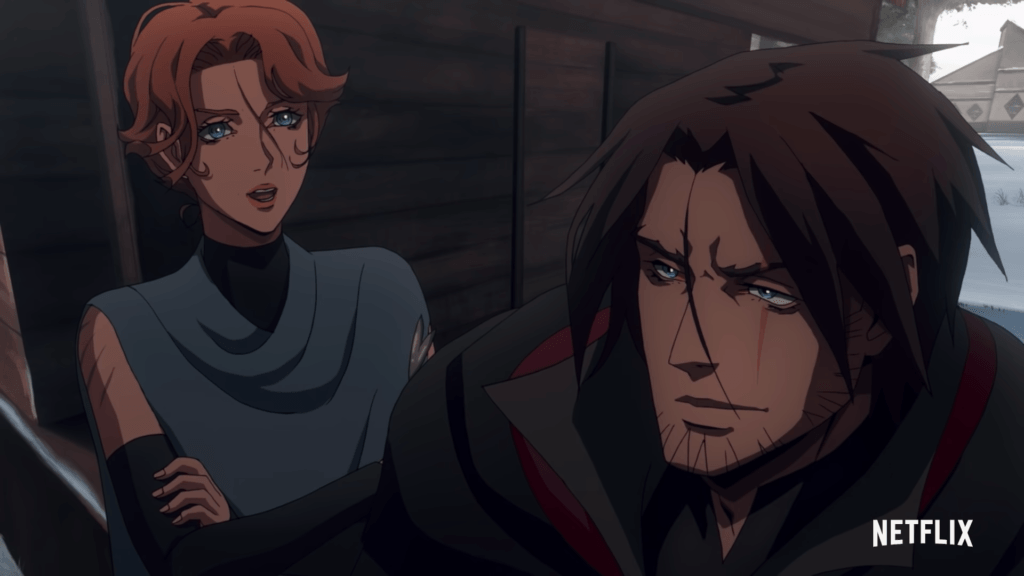 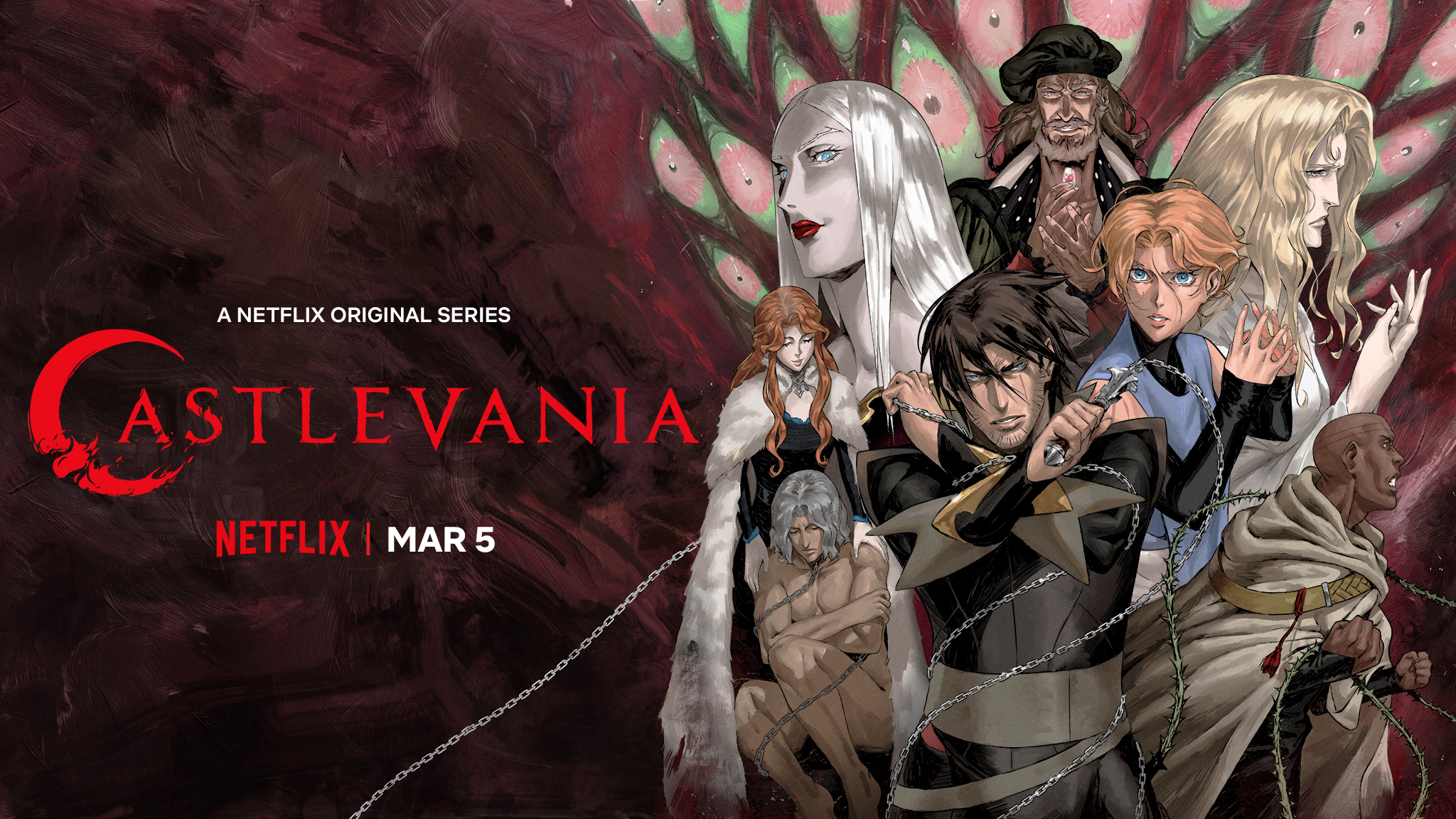