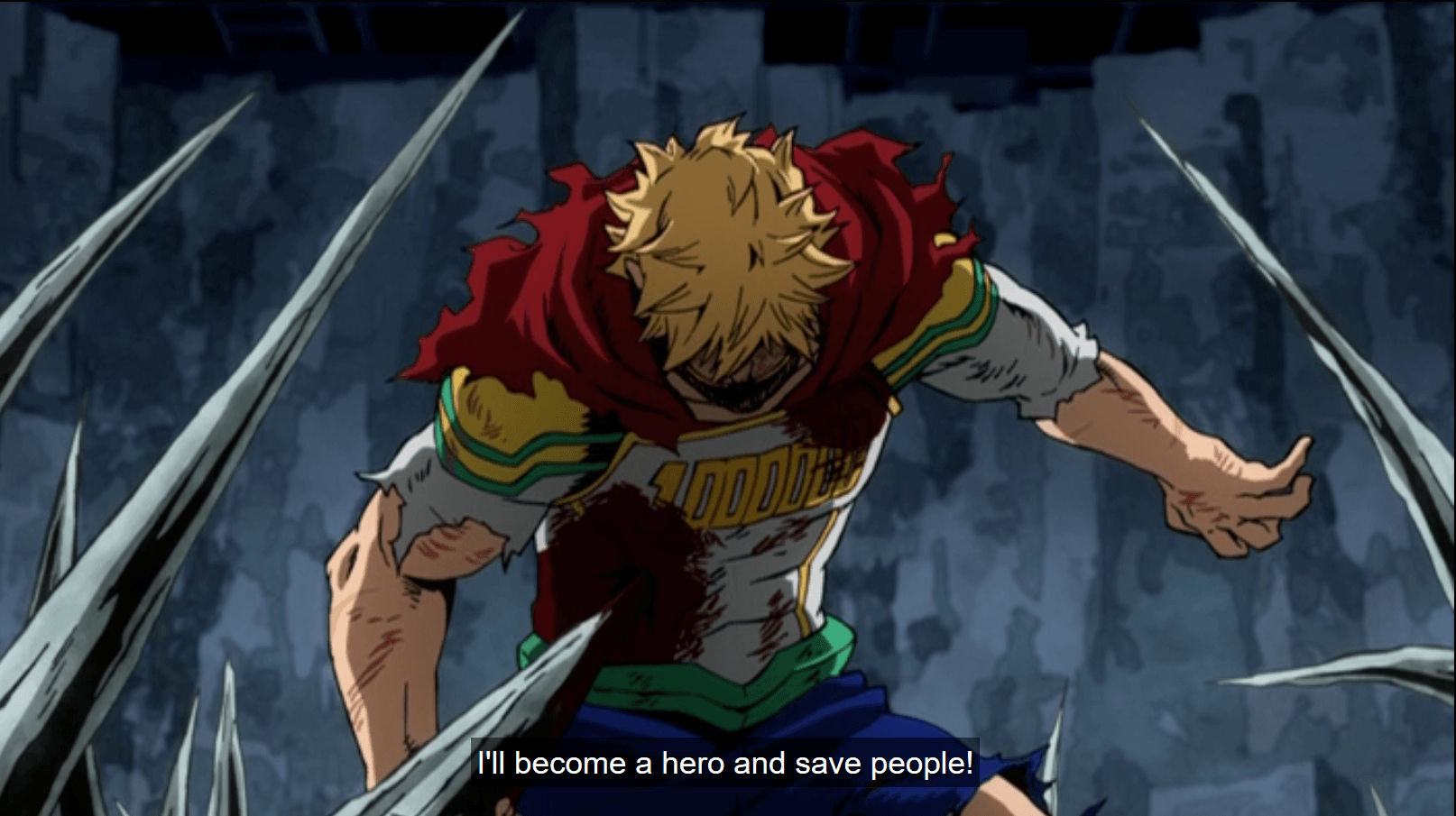 Overhaul’s taking his sweet ass time walking his underground maze with a care in the world, talking big about his perfected quirk destroying bullets (even though his associate is quick to remind him that production of such munitions is slow as @#$%) and is convinced that he’s going to take the top villain spot, and there have been few times in anime history where I wanted a villain to lose. But Overhaul’s an easy magnet for hate and ire after everything he’s done to Eri, and I think we’re all ready for a reckoning. 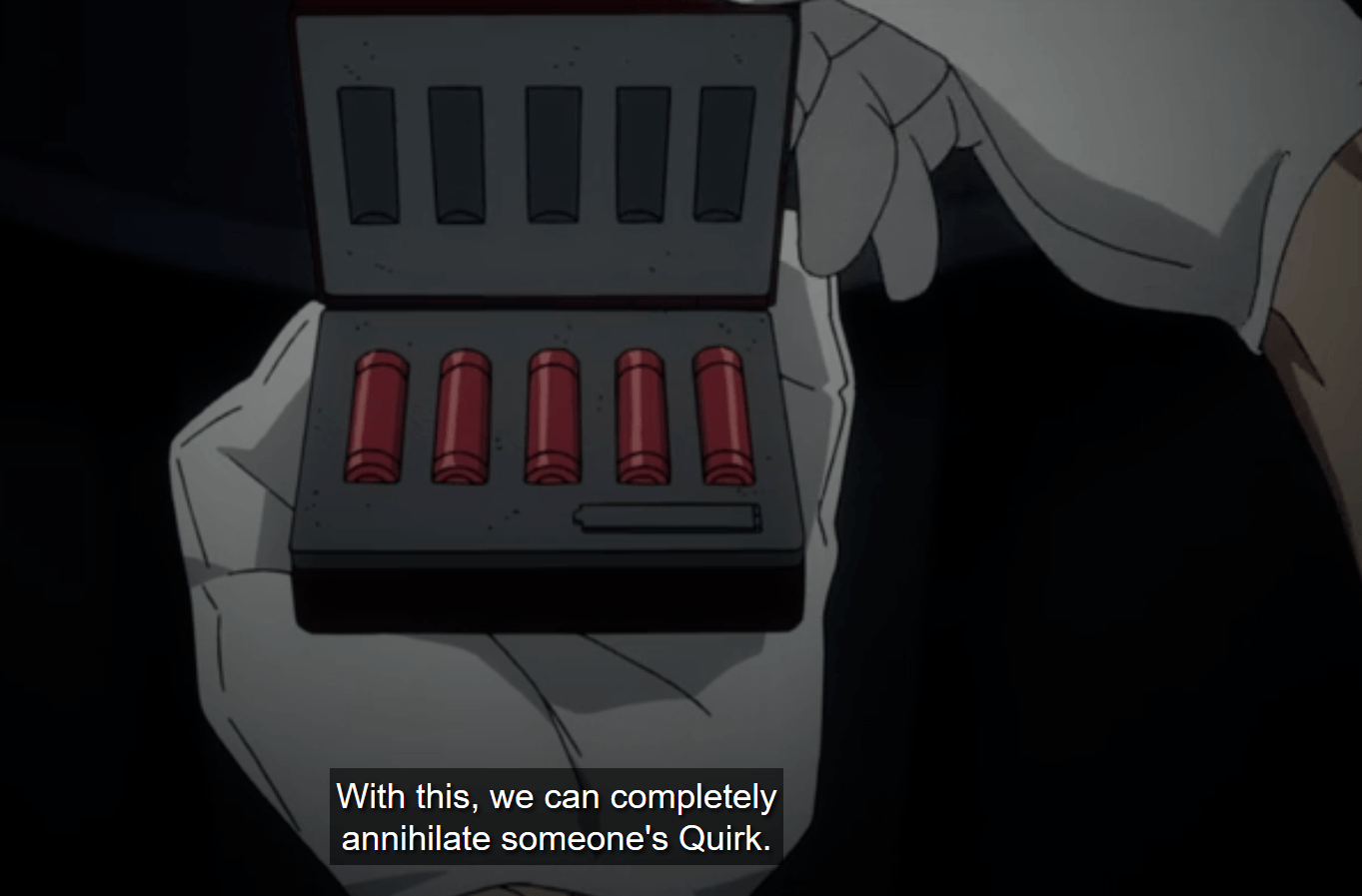 But before we get there, we get a flashback to when Twice and Toga first reconnected with Chisaki and the Shie Hassaikai. Overhaul tries to make amends by apologizing for killing their friend, but Twice and Toga rebuke him after he misgenders Mange. However, he is nonplussed and manages to extract information about their quirks via one of his minions thus setting the stage for the events in Temp Squad. Of course, Twice and Toga are card carrying League of Villain members as as Irinaka’s dose of quirk boosting drug begins to falter, they taunt the ever living hell out of them giving Midoriya a chance to expose the villain, Eraserhead a chance to erase his quirk, and Sir Nighteye ending yet another villain’s career with aforementioned onyx chess piece. The maze has stop shifting and the next round starts.

See, Lemillion has finally made it to Overhaul only to be ambushed by two of the Eight Bullets of the Hassai Group: Shin Nemoto (Quirk: Confession a.k.a. Truth Serum in Verbal Form) and Deidoro Sakaki (Quirk: Sloshed a.k.a. Shared Drunkness). Lemillion suffering a case from vertigo and brutal self-honesty, but he’s determined to be heroic at all costs because of his past failure to save Eri. Turns out that even when emotionally devastated and disoriented, he’s able to use his quirk at full efficiency and pull off his signature move: Phantom Threat. And he just keeps moving forward like it’s the only option he has because in his mind: it’s the only option he has.

You ever get hype for a drop of blood? You ever get hyped seeing a hero use his powers with such precision and power? You ever get hyped for a hero declaring: “I’ll never make you sad again”? Because in a short window of time at the midpoint of this episode, I was ready for Lemillion to prove on screen that he was the closest hero to the number 1 spot, and my dear readers, he did not disappoint.

See, Overhaul’s quirk can deconstruct and reconstruct everything, but his words are targeted to break Eri’s spirit and heart, and turns out he forgot to mention that Eri isn’t actually his daughter: he’s just using her for her blood, and Lemillion is having none of it. He successfully dodges a changing landscape and use his cape to be a complete badass and land blow after solid blow against Overhaul and his sole minion.

But Overhaul’s a clever bastard and he’s motivated by pure evil and manages to sneak his minion a bullet that is fired towards Eri and Lemmilion does the only thing a hero can do: take the goddamn bullet and then proceed to continue his beat down of Overhaul with nothing but his physical strength and conditioning.

Enjoying My Hero Academia? Check out BNP’s recaps of the rest of the season here.