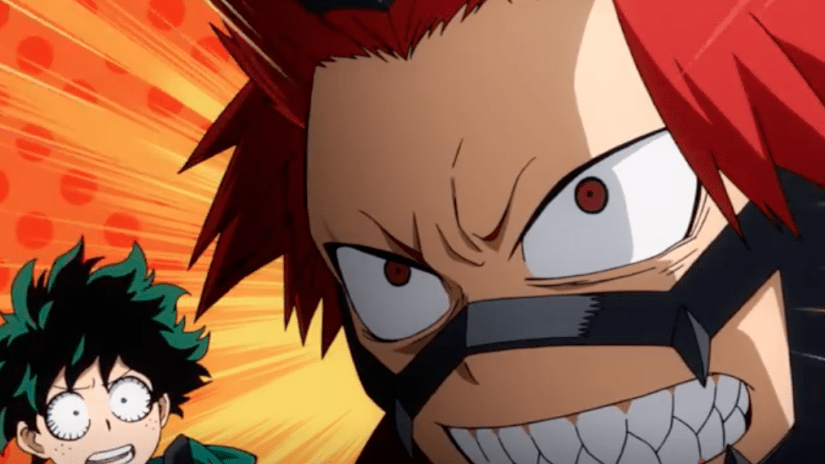 “As long as you have chivalry in your heart, anyone can be a hero”

Lately, you can catch me rockin’ the Fat Gum Agency jersey on my back after expecting straight trash from these three. Kirishima had his coming out episode back when that Chunin level villain popped those Quirk steroids and forced him to go Red Riot Unbreakable on that fool. Tamaki overcame his anxiety and went full Beast Boy Super Saiyan on those fools in that handicap match and somewhere Mirio is smiling with his headphones on listening to “Keep grinding boy, your life can change in one year, and even when it’s dark out, the sun is shining somewhere.” Fat Gum impresses me after every fight I see him in, and lately, these boys been on Ino–Shika–Chō levels of great.

Suneater put the work in on the 3 stooges and freed up time for Kirishima, Midoriya, Rock Lock, Eraserhead, Fat Gum, and Nightshade to find all the smoke.

Annndddd they played right into the villain’s hands, as they begin to target the heroes, starting with Aizawa sensei. But Fat Gum pushes Eraserhead out of the way and gets knocked into a battle, alongside Kirishima who was trying to save his teacher like Naruto when he stopped Mizuki from murkin’ Iruka with the giant shuriken. They run up against opponents who are the equivalent of a shield and a spear, and the shield/shield heroes may have met their worst nightmare. Red Riot immediately whips out his fancy new Unbreakable move and is wrecked off one punch! Homie swimmin’ in rubble after that haymaker, debating if he’s gotten any stronger than his middle school days, while the rotund hero steps up to the plate to get beaten and battered.

Sidebar: When describing their commitment to Shie Hassaikai, some super low level nen users speak about the erratic and concerning behavior of their leader. The fear component is there, but how far will that take them in the long run?

This guy Rappa is fed all the way up with the lack of competition in this enclosed room and doesn’t want his homie to use the barrier he puts up to protect Rappa. It’s an interesting conversation that provides the heroes with a little insight about their paired up strategy, to go along with the intel they got from those guaranteed-to-get-bodied thugs. Fat Gum takes on these two as their loose lips tell him that Overhaul knows the art of war and put his gaggle of villains together with a winning strategy in mind. The spear, Rappa, is assisted by the shield who puts up a barrier after he’s done goin’ Mike Tyson on his victim. Left alone, Rappa is eating away at Fat Gum’s absorption left and right, but this hero is the most hopeful dude on this show outside of All Might.

Fat Gum takes a berserker barrage of punches that you can see blasting through his clothes and out his back like little dango balls. Meanwhile, Red Riot is wallowing in despair so bad he flashes back to his bum ass days as a middle schooler. He’d been nothing but a boring boy with a chivalrous heart and hard body. He watches his now classmate Mina, from afar as she wards off bullies pressing a boy who can change leaves into cash. He later watches her convince a villain to stop attacking a group of girls. Her awesome courage and his inability to step up all lead to the man he has become. Well, that paired with the fact that he’s always looked up to Crimson Riot, who describes his worst moment in a video. He explains not being able to save someone, not because he didn’t have the capability, but because he hesitated for just a moment…and that’s why it’s ON SIGHT for any villain now!

Kirishima apologizes to the girls he was too scared to save and focuses on rushing into battle, victory, and not being scared, which he believes is his version of chivalry. He remembers his middle school lessons, the day he dyed his hair red, his conversation with Mina, and with the encouragement of the human punching, comes to his senses and gets back into the fight.
Fat Gum still taking shots like Ali goin ropa-a-dope on Foreman but Red Riot backkkkk. Rappa is hype: the young buck has found some fortitude and takes aim. Kirishima receives a monster blow but it was just what Fat Gum needed.

Homie turned into a whole Street Fighter Ken doll! He been a strapping, young, six pack havin blonde ting this whole time?! Fat Gum flexxed the most unexpected anime move since Thorkell threw logs to defeat a whole naval fleet! My guy transferred all those hits he absorbed into one mega, barrier crushing Falcon Punch and defeated those villains with a level of flair that would make Fullmetal Alchemist Major Armstrong proud!

Enjoying My Hero Academia? Check out BNP’s review of the rest of the season here.