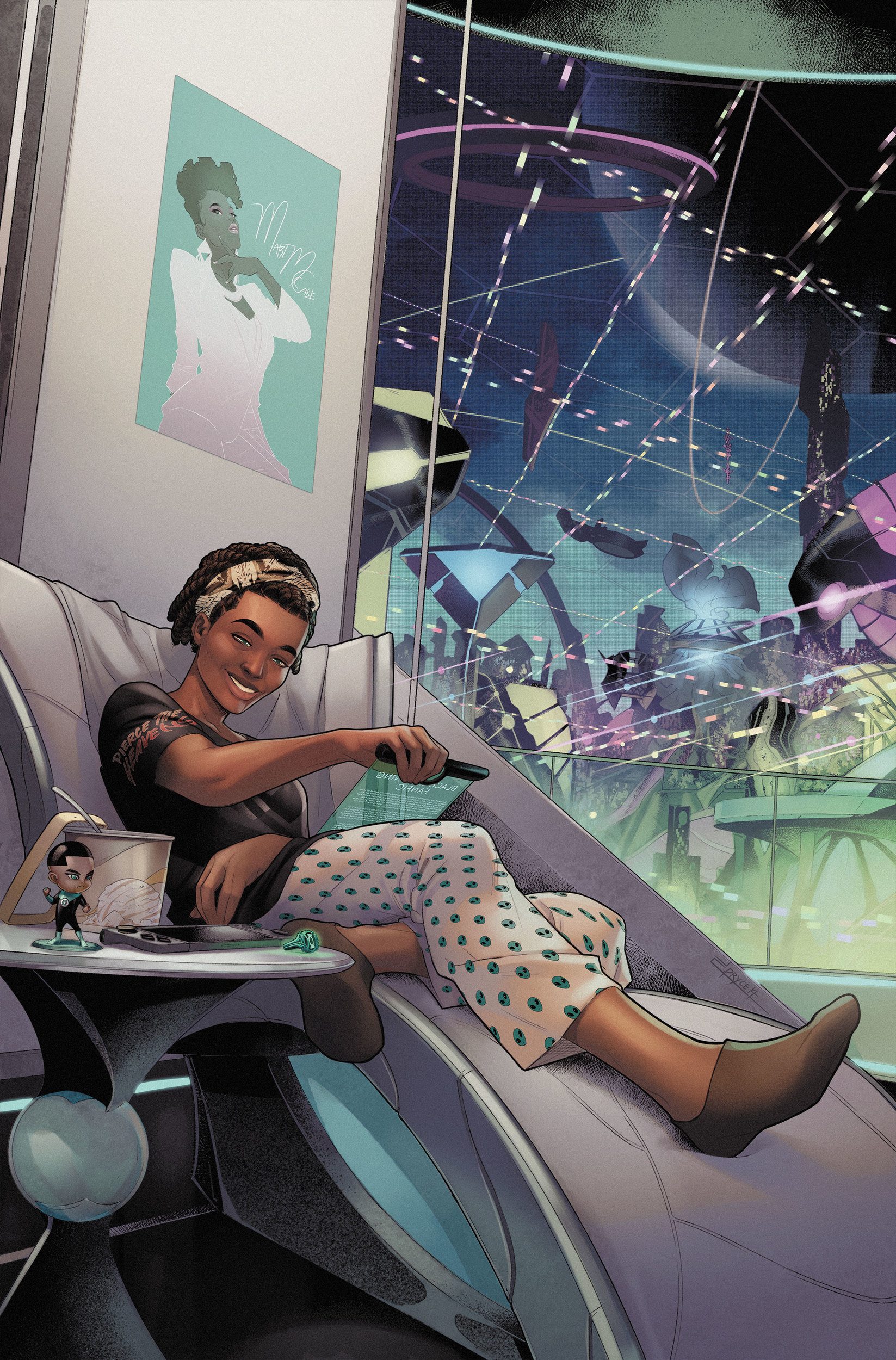 With the first issue of Far Sector out and our introduction to Sojourner “Jo” Mullein, the first Black woman to become a Green Lantern, it’s easy to see how the elements of Afrofuturism will separate this Green Lantern from the rest. You can thank the Jamal Campbell on the art for that and the multi-award-winning pen game of writer N.K. Jemisin. N.K. Jemisin came through and opened up the most pit in DC Comics sci-fi genre which is exactly what it needed. We got to do a quick interview with N.K. Jemisin to discuss the latest all things Far Sector #1, Green Lantern Lore and More

Omar Holmon: I gotta give you the hard-hitting questions from jump. So the first one is, How does it feel to have the best-dressed Green Lantern in the game to date?

N.K. Jemisin: *laughing* I feel a deep responsibility to make her so because A) she is the first Black woman in the game but also because I obviously was inspired by Janelle Monae and that means of course that she has to look fabulous because I cannot disrespect Ms. Monae like that. That’s really what that came down to. I mean, some of it is also because she has been so much of a representative in so much of her life. She’s been one of the few black women in a lot of the spaces that she’s inhabited in her life. She’s learned to kinda just represent herself as best she can at all times because she is aware of how she is going to be judged and how negatively people are going to react to her no matter what. So, she makes sure her eyebrows are fantastic all the time. Makes sure her hair looks fabulous all the time, because that’s almost like a defensive technique. Part of her uniform is part of her weaponry. 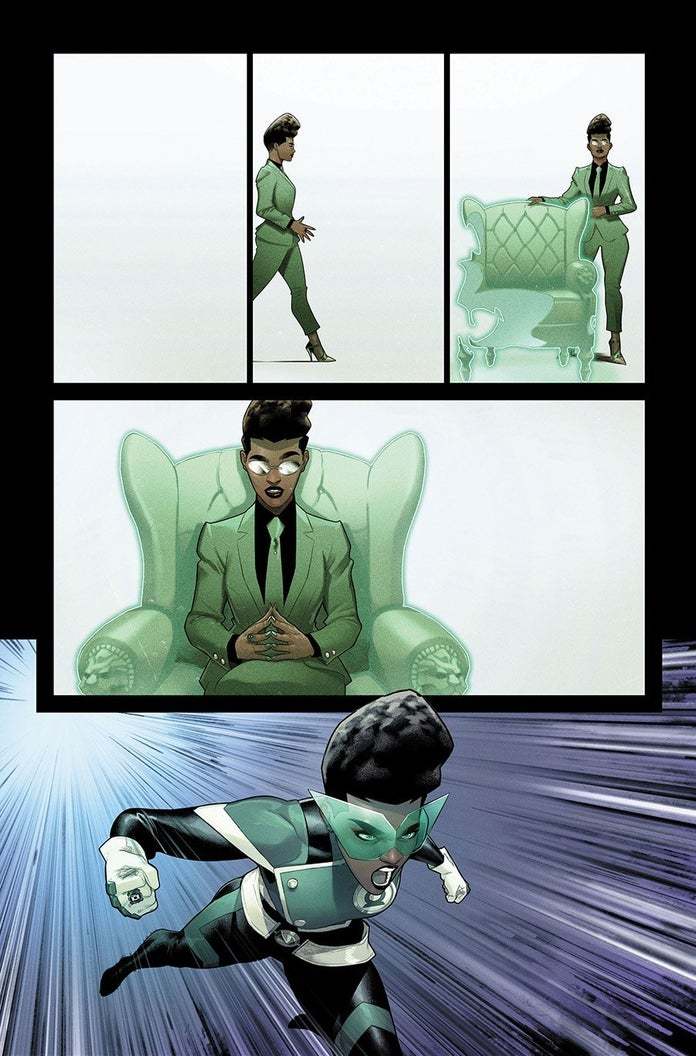 Omar: That she’s based of Janelle Monae is really apparent, so I just wanna know what songs did Jo take with her to listen to while she’s in The City Enduring.

N.K. Jemisin: *laughs again* ummm, well let’s see, I believe she might have left before Dirty Computer came out because she’s been there– no, no, let’s see… Dirty Computer came out last year, right? She might have Dirty Computer. Everything else tho, “Tight Rope” would be a perfect example song, especially considering her life right now. Hmmmm, I’ma big fan of “Many Moons.” I don’t know if you’ve ever seen the video but the video if you remember it, feels to me like The City Enduring. It’s bunches of weird wild people in the future doing weird wild stuff. There’s people of color everywhere. There are vampires. Why there’s a vampire dancing in the middle of the video? Nobody knows. They’re just there. There’s robots. We don’t know why, they’re just there. That to me kinda feels like the aesthetic of the city enduring.

Omar: Jo’s story is taking place in present-day, and its been said in solicits and by you, that Jo is a former NYPD officer as well as having a military background. That hasn’t been explored much in the book yet. So, we don’t know why she left the armed forces which will be revealed but can you tell us why she wanted to join these institutions in the first place?

N.K. Jemisin: I mean that’s going to come through in the series. I’m hesitant to get too deep into that cause it’s kinda spoilers. (Omar: Ahhh! First roadblock. Detour time!) Ahhhh, well more of a delay.

Omar: Aside from the most powerful weapon in the universe, to you, what does the Green Lantern institution offer that’s different from American police institutions? In the general sense.

N.K. Jemisin: I think the Green Lanterns kinda start by hiring people that put the needs of others first. A lot of American police are trained to put themselves first. That’s not saying that they are necessarily bad people. I’m just saying that that is part of the training which is to prioritize their own survival. And what that means is, they’re basically taught to shoot first and ask questions later or a lot of police are taught that way. I think some are starting to reform their training. The Lanterns start with people who put other people first. I think that’s a huge difference. They acknowledge the fact that their job is to help other people. That’s why Jo got picked. 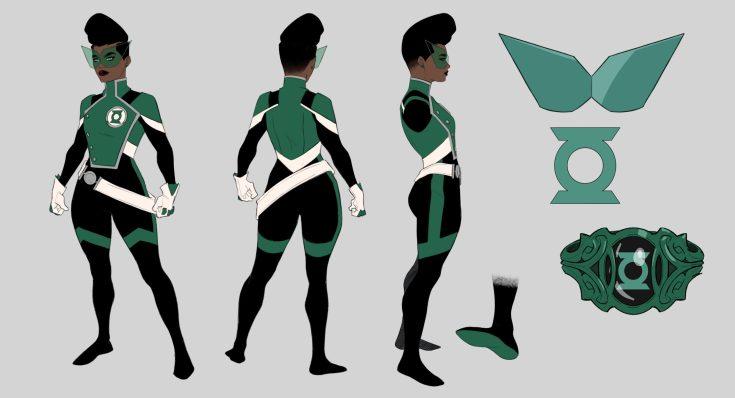 Omar: Nice. We know now in The City Enduring there is no emotion. These three races, The Nah, The @AT (pronounced At-At), and the keh-Topli use universal languages (like crying, laughing, smiling) to show what they are feeling. How much do will those universal languages come into play because couldn’t there be someone using them to lie?

N.K. Jemisin: Using emotional words to lie? Yes. In a heartbeat. The City Enduring and the trilogy races are all emotional people by nature. It’s only in the last 1,000 years that they outlawed emotions. Before that, their languages revolved around emotions. Their body language incorporates emotion. Jo pointed out in the first issue, they smile and yell at each other, all of this is just how people communicate. It doesn’t necessarily mean they are feeling it but it’s how they convey– like in our own culture, one of the reasons that are speculated to exist for the handshake is that it’s a way to show “Hey, I don’t have a weapon in my hand right now. I’m not about to stab you. I’m going to give you this symbolic test of strength so that you don’t think that I’m a weakling.” The theory is we shake hands as a symbolic gesture of “I don’t want to kill you right now.” Obviously, in our culture, we don’t believe that people should exist in our society. So, it’s the same way for them. They think of emotions are primitive but on the other hand, they are happy to use them as part of their complex set of communication gestures, languages, and words and things like that. Of course, they can lie. …They ain’t Vulcans.

Omar: I gotta ask. For the @at race it’s like a triple to entendre referencing Twitter, Star Wars, as well as African / African-American (“Aht Aht Aht” meaning “no no no”), that was obviously intended right, the triple play?

N.K. Jemisin: *laughs (hat trick)* I dunno about the third one. It was more just meant to be a sort of a joke on the use of the “@” symbol. So more of a writer play and how writers have lost the ability to use the @ symbol because of twitter and some of us are still mad about it. 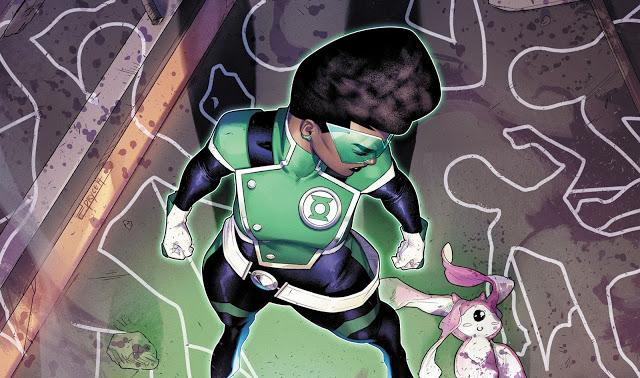 Omar: You built so much world-building behind the races as well, but we haven’t learned that much about Jo. I noticed we only saw her use a construct once and that usually acts as a psychological profile for a Green Lantern since they all use them differently. We’ve only seen her use it once to make two seats, and when she did, there was an alien in her seat. She had a slightly surprised reaction like “oh” as if it was an accident when she saw it occur. What’s that scene about?

N.K. Jemisin: uhmmmmmmm, some of that will also become clear in the rest of the story. Unfortunately, that’s the problem when it’s a world-building issue. Basically, she does have a different ring. Her ring functions in a different way from most Green Lantern rings. There’s a reason for that that I can’t go into. One aspect of it is her’s is a little bit more sensitive than a standard Green Lantern ring. It shares a teeny bit more of what’s going on in her subconscious than it really should, so she’s still getting used to it.

Omar: Was there a specific Green Lantern run that you went back to as research for reference of The Green Lantern lore, and if so, is there one that stuck out to you the most or you had the most fun reading?

N.K. Jemisin: There were a couple actually. I did get the giant Geoff Johns compilation of the early years of Green Lantern so I could read the whole origin story of Hal Jordan. A friend of mine gave me several issues involving Guy Gardner. I became a giant fan of Guy Gardner. Yeah, he’s probably my favorite. I did watch Justice League for a while with John Stewart. I also read the DC Universe rebirth chapters of Green Lantern with Simon Bas and Jessica Cruz. I’ve read obviously the DC wikis of the various characters and background stories and so forth. 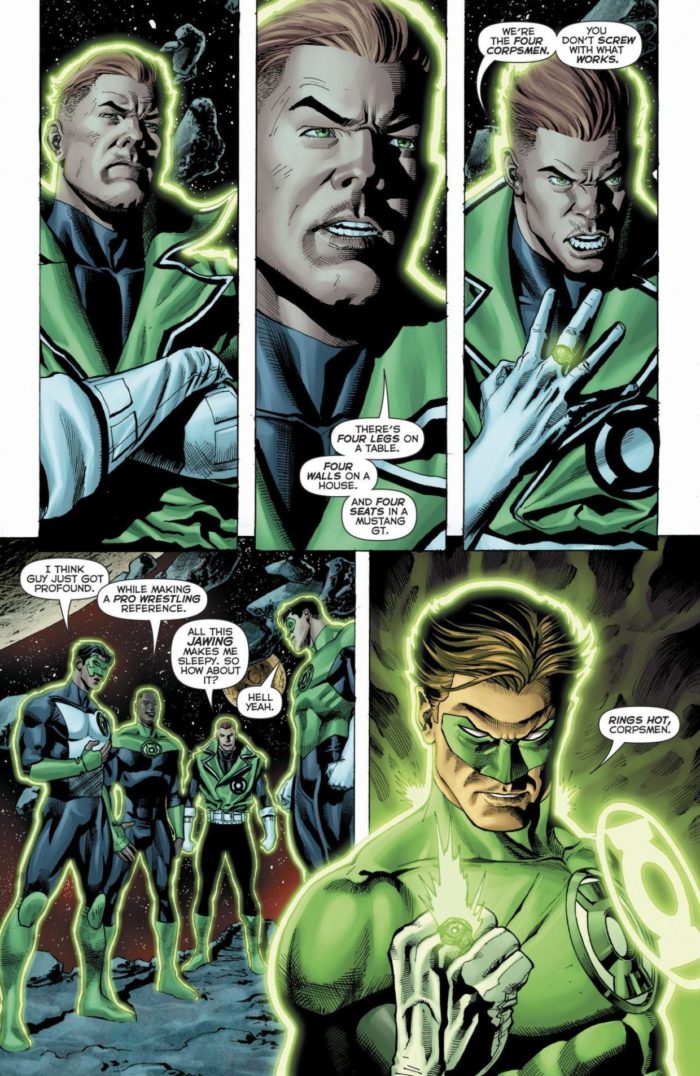 Omar: You mentioned Guy Gardner, I saw from your NYC Comic-Con interview with Karama that Guy Gardner was your favorite. It’s funny cause when he debuted he was a one-dimensional character, then a punchline cause batman knocked him out, and only recently he’s become the character he was supposed to be and John Stewart’s best friend. So, what is it about Guy Gardner that you like so much?

N.K. Jemisin: He feels a little bit more real and more human to me. It’s possibly because he’s been a punching bag. I have a tendency to latch onto the underdog. It’s probably not a rational reason, I don’t like people who come out of the box relatively perfect. Of course, none of the Lanterns aren’t meant to be perfect but a lot of them are more upstanding, more kinda together than the average person. I kinda like that one of the Lanterns has been a shit show that needed to get his shit together. That to me makes him seem more engaging. He’s done some horrible stuff, he’s not a great person, but I like seeing that he’s getting better. I always like people who get better.

Omar: When I saw Jamal Campbell would be the artist with you, to me, it made perfect sense that yall would be tag teamed together. What were your thoughts seeing him visually bring to life the world that yall architected together? 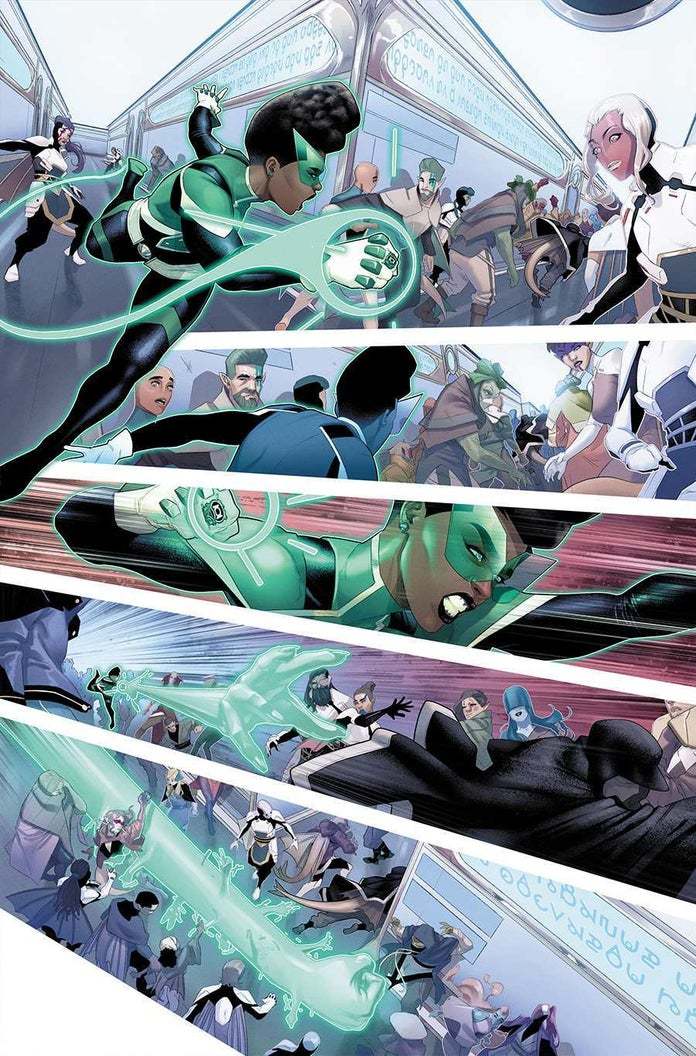 N.K. Jemisin: Just…sort of…awe. I’ve never had anybody, other than fan art, had my work illustrated before. I’m giving Jamal relatively sketchy descriptions to run on. I’ve explained The City Enduring to him. I got a little set of documents that I’ve shared with him on how the different races work together. What the aesthetics are. Some visual images that I found to suggest. I wanted the clothing to be afro-goth. I said at one point something like “they have a delivery vehicle that can walk up the side of the building.” and then he drew a vehicle that was like a four-legged spider going up the building. It’s been fascinating working with an artist that can take words and turn them into visuals. I’m enjoying the hell about it.

Omar: I was excited to see Black aliens too. That’s why I’m here!

N.K. Jemisin: *laughs* Of course, who you talkin’ to? That was not a question.