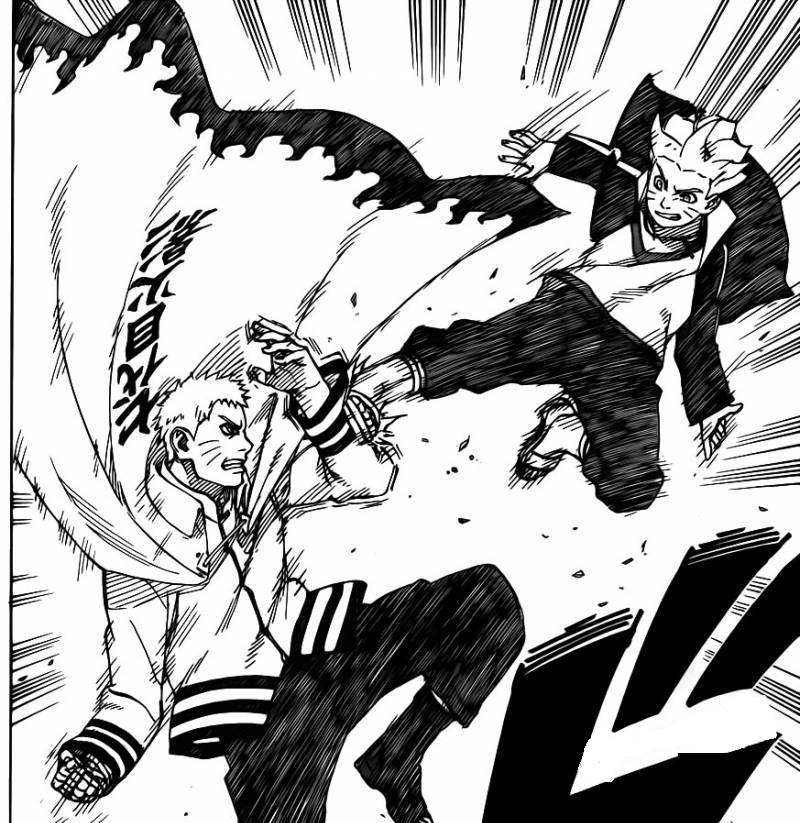 “Uh, uh, uh along with the track man // Uh pardon me, uh, as I come back” *said with arms in the air as if care is not given* Yeaaaaaaah, we back at it baby. It’s a brand new day up in the village hidden in the foliage my ninja. We got the return of the series that was putting it down for the shinobi 15 years strong. Masashi Kishimoto gives us the second installment to Naruto titled “The Seventh Hokage and The Scarlet Spring Month”. We see this story focusing on the next generation of Hidden Leaf Village ninjas about to take their graduating tests to become Gennin.

One of main players this issue was Sarada Uchiha the daughter of Sauske & Sakura.

We see her upset because she doesn’t know what she has in common with her father Sauske since he was gone from the village while she was a baby. Sauske still out here trying to be a lone wolf and shit, meanwhile his kid got mad questions. She is very envious of her fellow students who can train with their fathers (they see it as a drag) while she has to watch old highlight reels from the previous series just to get a sense of what her dad is like.

Of course another character that got a lot of time was Boruto, Son of Hinata & Naruto.

We got Naruto’s kid out here playing hide and seek with his dad. It is evident since we first saw Boruto in issue 700 that Naruto’s time as Hokage doesn’t leave much time to be spent with Boruto (as well as his daughter Himawari). Boruto’s situation parallel’s Sarada’s whereas her father is away and she feels estranged, Boruto’s dad is present but their time together is scarce as well.

It’s wild to see the cast we been reading for 15 years with children that cho traits of their personalities. Boruto at one point refers to Shikamaru as, “old man Shikamaru.” Shikamaru has got to be in his mid 20’s at least. There is no way this guy is even near 30. Just goes to show that you could be 25 but to a 9 year old that means you’re about 80 years and up. Anyhow we got Sauske making his way back to the village and Sarada with some new found evidence that she is going to want some answers straight from his mouth.

This has the feel of Saved By The Bell: The New Class but the anime / manga version. This is still only going to be a mini-series and it is going to lead to the Boruto film but you gotta wonder what the danger is going to be since all the lands are cool with each other. It’s going to be fun waiting for that aspect to unfold.