type in your search and press enter
631 Shares

A trend may be forming as modern dystopian survival films continue to pit families against the supernatural based on a single intrinsic feature. For sound, there was this year’s surprise box office winner in Jon Krasinsky’s A Quiet Place, where the risk of noise meant the threat of your survival. For sight, we now have Danish director Susanne Bier’s Bird Box, based on the 2014 novel by Josh Malerman. And like A Quiet Place, Bird Box places its bets on a mixture of tension based in the unknown and an audience’s love of family resourcefulness.

There’s a healthy suspension of curiosity required to enjoy a film like this, as you should expect to have few answers to its most obvious questions. The “why” of it all will buzz like a fly in your ear if you let it, so of course you simply shouldn’t ask and instead operate within its premise: a mysterious thing — biological weapon, demons, aliens — begins to cleanse the world of humanity by instantly compelling a person to commit suicide should they look at it. With little more information than that, Malorie, played by Sandra Bullock, ventures to take her two children from point A to point B in search of a sanctuary where they can live. That’s the third act of the film however, which is sprinkled throughout the movie’s entirety to let us know how the dystopian future will eventually play out. The first two acts of the movie exist five years prior when the outbreak begins, allowing you to play the game of “what would I do if this ridiculous thing were to happen,” the grown-up rendition of a teenager’s “would you rather?” with two gross choices. Indeed, the concept for Bird Box stands at the cliff of the ridiculous but doesn’t fall off of it as a silly plot saved by the strength of its cast. 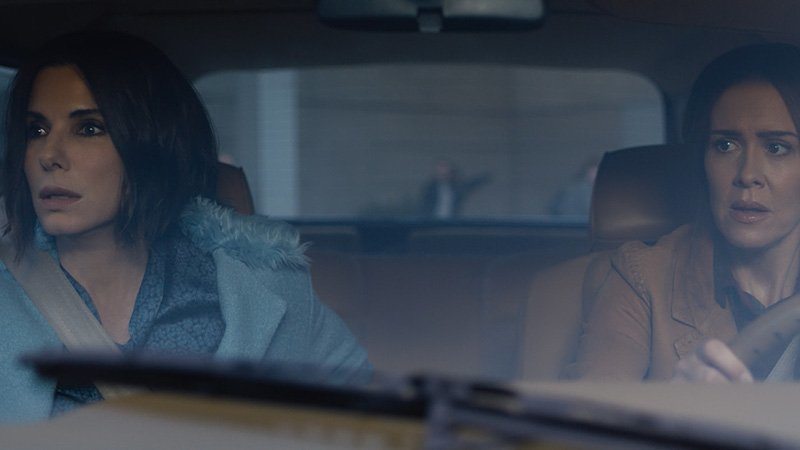 Before the crisis hits, Malorie is pregnant with her first child and is soon to take her latest sonogram, a fact she represses as she channels her semi-misanthropic nature into productivity as a single painter and soon-to-be mom. Her openness is only seen with her sister, played by Sarah Paulson, whose banter solicits the level of openness that can only be afforded to someone who grew up in the same home you did. When the crisis hits, Malorie finds herself one of a fortunate handful of survivors — if one could consider anyone in this crisis fortunate at all.

Isolated in a house and unable to leave for fear of nearly certain death, the film becomes a closed-quarters survival thriller for its second act as the unwitting team makes decisions on ways to survive. This second act is the least compelling of the three parts, sandwiched in between the initial intrigue of the crisis and eventual perilous journey of Malorie and her two children. So, the second act comes with all the elements you might expect from a closed-quarters survival thriller. Bird Box goes furthest off the rails in a sequence meant to close the second act and shatter the protection of their safe place, but even that can be forgiven because of the character work done prior. By then you will have hopes for certain characters you want to see fulfilled, as well as an empathetic fear solicited by a range of performances like that of a “shrewd-asshole” played by John Malkovich, a “benevolent damsel” played by Danielle Macdonald, or an “emotionally avoidant hero” played by Sandra Bullock. (At some point you may also wonder how a military veteran maintains the 4,000-calorie diet his muscled build requires during the end of the world, but leave that question suspended as well and replace it with gratitude for Trevante Rhodes.)

There’s a fun creativity in the horror element of the film and a lasting tension that’s cranked highest in watching on the big screen. Fitting then, that Bird Box will go beyond streaming on your Netflix account to also have exclusive limited theatrical engagements starting December 13th in Los Angeles, New York, San Francisco, and London. There’s an important decision in whether — or how — to depict the mysterious force that’s decimating the planet, and Bird Box makes the right choice to trust the audience’s imagination. In that sense, it’s like reading a book where the elicited emotion is given for you to fill in the blanks, and in turn your imagination gives you a catered experience of what’s most horrible to you. In screening the film, I was fortunate to watch it in a theater setting, which made me wonder how the experience would be faltered by a less immersive atmosphere of a living room. As the characters are blindfolded through much of the film, suspense often comes from the fear of the unknown and sudden sounds that surround them. To be clear, there are few, if any, jump scares in Bird Box, but expect the setting to be important nonetheless: turn the lights down low and the volume high. 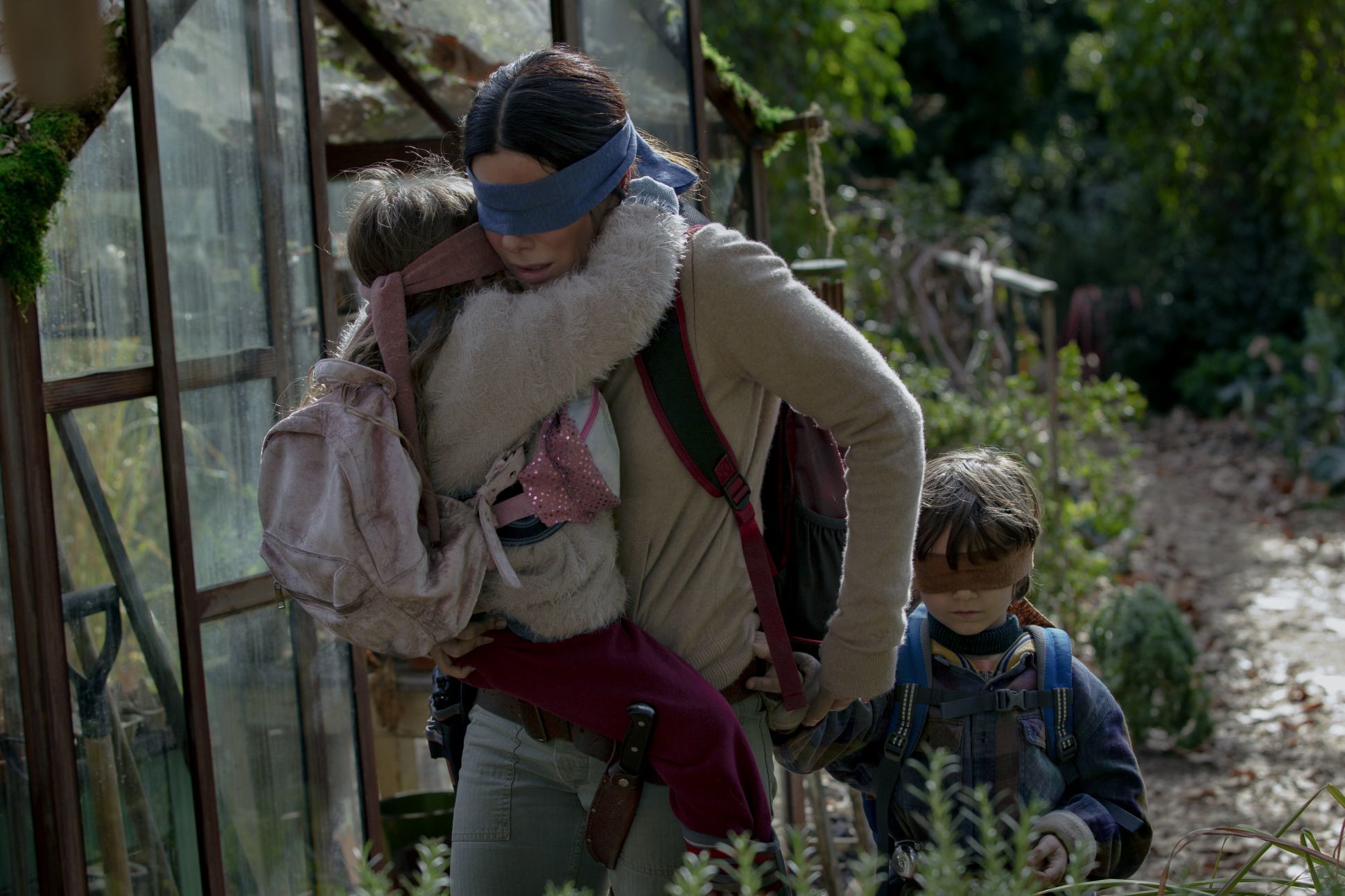 An unexpected heart comes from themes of motherhood and hope, and what it means to be a parent. To what extent is it a parent’s job to prepare their children to survive a cruel world versus giving them hope to thrive happily inside it? Bullock’s Malorie challenges the typical portrayal of motherhood early and often, intent on the former more than the latter, abandoning softness for the higher calling to keep her children alive as best she can. Given what we know of Malorie, it begs the question of how much of her mothering style is due to the crisis, as the crisis surely lends itself towards her predisposition, making it an even more relatable question given that many would raise their children with the exact same priority. Survival first, then joy a distant second.

Overall, films like this work to the extent their characters represent decision-making that stretch the sharpness of the audience (without overdoing it with Macgyver-esque antics) or suffer the opposite problem of insulting them with idiots. Bird Box toes the line well, allowing the “what would I do” game to last its 2-hour runtime while the cast meanwhile generates the level of empathy required to care about their survival at all. The result, if you’re bought in, is one of the most intensely stressful movies you will have seen all year. Bird Box is a tensely fun survival thriller with great performances that added an unexpected heart and is a solid choice for a night in on a cold weekend.

This article has been updated to include the film’s limited theatrical release starting December 13th in Los Angeles, New York, San Francisco, and London.