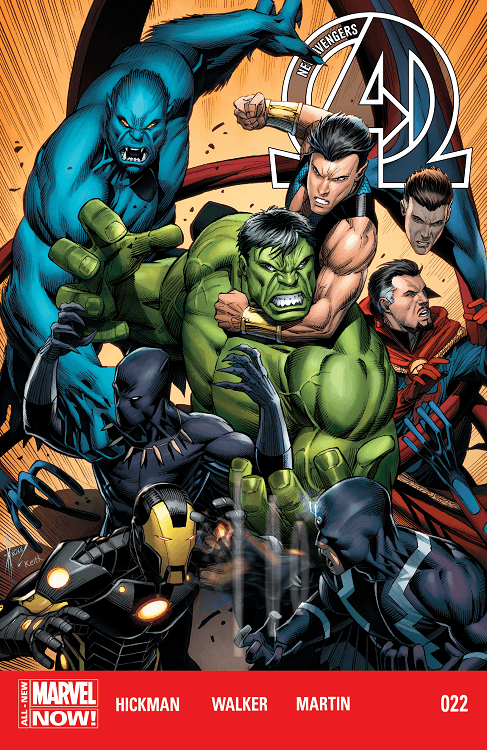 Ok, ok, ok, get off my back…New Avengers is back in stride and for the record, there’s no one happier that this book is kicking ass again, than me. I’m sure we were all wondering how in the world Hickman would follow up how the last book ended. With a ton of plot threads out there, the impending war with Cap and the Avengers, the possible coup of Maximus and Black Swan and of course, more incursions coming, he instead focused on how the last tragedy effected the team. Primarily, Hickman focuses on the feud between T’Challa and Namor, which we can definitely upgrade to “blood feud” at this point. While (we assume) that the actual and literal destruction of a world ranks higher in importance, the tension between T’Challa and Namor has been building even before this run of New Avengers began when the Phoenix fueled Namor drowned Wakanda during Avengers vs X-Men. This book has done a great job of building on that, even of late with the shunning of T’Challa from his father and other Panthers for not going after Namor. Well, shit just got real. The cold, calculated and deadly King of the Dead is completely unhinged with anger when it comes to Namor as all the cards were laid bare. T’Challa has sacrificed just about everything except his own life at this point for the Illuminati’s cause, but that may not matter any more.

To be fair, nothing in the plot moves forward from last week’s issue except the physical confrontation between the two Kings, but that’s enough. The emotional impact locally will always resonate for longer than the destruction of another world, simply because of the readers familiarity. With the team coming apart like this and another incursion coming, just about ANYTHING can happen in this story now.

Another really entertaining issue of New Avengers as Hickman is in a full sprint now with this book over the last few months. The rivalry between T’Challa and Namor has been my favorite thing about the book and this issue has that conflict at center stage.