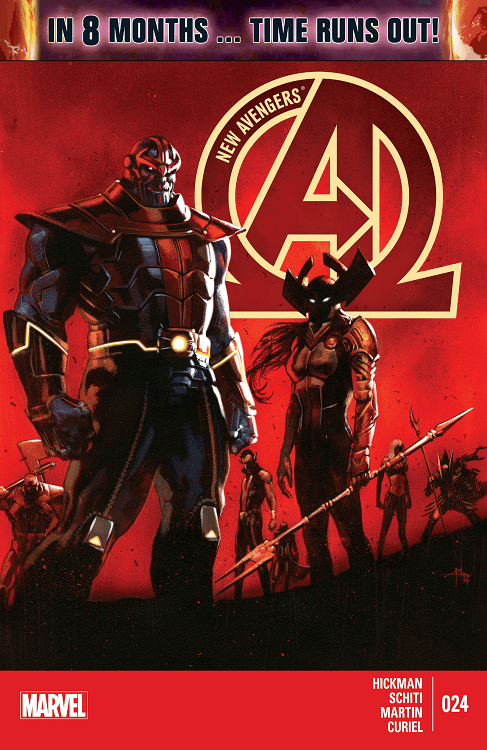 “Best of luck with your genocide.”

The subtitle of this issue of New Avengers is “The Cabal,” and while they are the prominent concern this month, there is so much more to this issue. It is packed to the gills. Hickman does a lot of things in spectacular fashion, though efficient isn’t typically used to describe him. Still, I have no idea how he crammed this much into a regular sized issue. So many things happen, that’s its hard to know where to start, so the beginning is as good as any. Apparently the menu in Latveria has EVERYTHING on it, including a whole serving of humble pie. Eight months after Namor set the Cabal loose, surprise, surprise, he can’t control them and they have run amok. It’s almost unimaginable to think how many billions of people they’ve killed now by destroying other Earths in 8 months time, but Namor has seen their appetite to destroy on this level only grow, something even HE doesn’t have the stomach for.

There are a number of big revelations in this issue, including the torture of the familiar X-Men on the unfamiliar Earth-71202, but the biggest one was the fate of Wakanda. It was nice to see Shuri and T’Challa side by side for a brief while, but their continued union is very much in doubt as is the fate of their City on the Hill.

But this wouldn’t be a Hickman book without introducing yet another key player into the mix and as I’ve already mentioned Latveria, that means that Dr. Doom is now prominently involved. Which could mean ANYTHING can happen from here on out.

I have remained pretty vague in this review as I don’t want too many things to be spoiled because it is a fantastic read wrought with emotional beats and truly desperate moments. For a solid 5-6 issues now, Hickman has pulled this book back into being one of the best on shelves with much, much bigger things on the horizon.