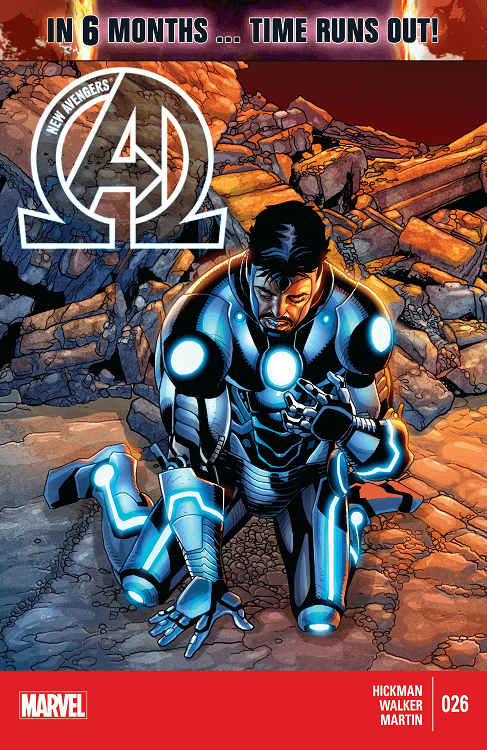 Finally, after dangling that carrot above us ever since Time Runs Out began, finally we find out what happened to Tony Stark. While there were theories of him fleeing off world or being hidden underground or somehow dispatched from the Illuminati, I’m not sure how many people guessed that the Cabal has had him in captivity this whole time. As I mentioned in my Avengers #38 Review, everyone has their own theories for solving or dealing with the incursion and this issue begins with Doctor Doom taking a stab at it. As I don’t read Fantastic Four much at all, it is cool to see the interaction between Doom and Lil Einstein Richards as she gives her expertise to solve the multidimensional world collapsing problem. You know, if you’re in to that sort of thing.

But this is the Tony Stark show, this issue, no question. The storytelling in conjuction with the art works so well here. Tony Stark, slumped in his transparent cage, his armor half torn from his body. I also love how we are given the most minimalist peeks into HOW this all happened as one page is the totality needed to show Stark’s defeat to the Cabal. His conversation with Black Swan is both enlightening and very, very Tony. It all works. But the main course meal is the arrival of Spider-Woman and Black Widow (brilliantly and silently alluded to in Avengers #38 as well). Hickman nails the personas of everyone involved and the logical conclusions they come to. But the last page of Tony Stark at his absolute best (read: worst) is what drives home just how fucked everyone is and really puts a fine point on who exactly needs saving.

New Avengers and really the Time Runs Out storyline continues to do storytelling and desperation right. Of course the title implies a ticking clock, but the atmosphere that is created make this all feel like a lost cause with very little ground being made up.